Though video games have always been an art form, such a concept being embraced has only been around for a bit over a decade. Since the mid-2000s, many games have come along to attempt to “legitimize” the artistic merits of video games, usually by replicating Hollywood-style cinematic and storylines. Despite their best efforts, such “art games” are rarely the ones that showcase the unique artistic merits of video games. More often, it’s the titles that fully embrace their video game-ness that make for the best examples of ‘games as art.’ And that sometimes includes titles which are unabashedly silly, and want little more than to put a goofy grin on the player’s face.

The brilliantly titled Untitled Goose Game, by indie developer House House, is one such game. Though it may lack in depth and substance, Untitled Goose Game delivers a pure and simple gameplay experience that is consistently fun, and should get a good laugh out of even the most jaded player.

Yes, that’s all there is to it. The game showcases a day in the life of the Goose, who has made a checklist of different means to mess with people throughout the day. It’s the player’s job to make sure the Goose checks off all of its nefarious deeds to ensure a productive day.

The game is separated into five segments, which can be viewed as ‘chapters’ or ‘levels,’ though the transition between them is seamless as part of a single game world. Each segment has its own checklist for the Goose to complete, with one item on each list requiring the Goose to collect various items. Once all but one of the items on a given checklist are complete, that segment’s final item unlocks, and upon completing that, the Goose gains entry to the next segment.

These tasks include but are not limited to: Honking just as a man is hammering a signpost into the ground so that he smashes his thumb, scaring a kid to run away and lock himself in a phone booth, moving a chair just as an old man is about to sit down so he falls on his rump, dropping a bucket on a man’s head, stealing a toy from a kid and placing it in a shop so the kid has to re-buy their own toy, and trapping someone in their own garage.

Each task is its own little joke. Though they aren’t difficult to pull off, the variety and humor found in each task give Untitled Goose Game a nice flow and a strong sense of personality.

Of course, the Goose must complete these tasks as sneakily as possible, because if someone sees the Goose coming, they will appropriately chase it away. Not that there’s any real penalty for getting caught. Untitled Goose Game is one of those titles that’s triumphantly easy. There’s no way for the player to truly lose, as getting caught will ultimately just slow the Goose down. Essentially, Untitled Goose Game is like a lighthearted, penalty-free Metal Gear Solid.

Untitled Goose Game also has a refreshingly minimalistic score. Composed entirely on piano, the music to the game is situational, and will be soft and serene or loud and fast depending on what the Goose is currently doing. 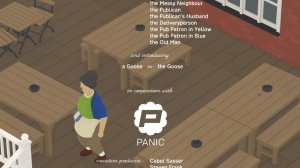 The game is consistently fun and funny throughout its runtime, with the game’s one major drawback being that said runtime is all too short. Granted, I’ll take a game that runs short and leaves me wanting more over a game that overstays its welcome by being obnoxiously long, but there does come a time when a game is so short it feels like it doesn’t quite reach its full potential. Sadly, Untitled Goose Game falls into this category. As fun and charming as it is, Untitled Goose Game’s “story” can be completed in about an hour and a half, and although additional checklists appear after the credits roll, they can be completed in about just as much time. Untitled Goose Game is a lot of fun while it lasts. Sadly, it doesn’t last for very long.

Though short, Untitled Goose Game is undoubtedly sweet. It’s a string of punchlines with the common thread being the everyday villainy of a Goose. Its gameplay is simple, but rewarding and entertaining. Every last task on the Goose’s to-do list should have you grinning from ear to ear.