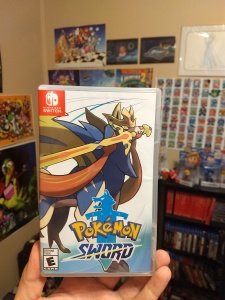 I now has (yes, has) Pokemon Sword version. Does Nintendo still use the terminology “version” to distinguish Pokemon games anymore? At any rate, this is cool not only because it means a new Pokemon adventure, but also because I have no more video games on pre-order for the rest of 2019! This, of course, means I will have ample time to catch up on my back catalogue, as well as my game reviews.

Sure, there are a couple of other 2019 games that look interesting, but I’m so inundated with games I’m just gonna have to stave it off for a while. Of course, Christmas is coming up, and if any of my more generous/bestest friends happen to be reading this, I’m perfectly fine with getting some games as gifts. *Hint hint wink wink*

Anyways, along with playing Pokemon Sword (what, you thought I was going to get Shield version? Is anyone getting Shield version?), I will try to catch up on other games from 2019 like Sekiro: Shadows Dies Twice and Astral Chain, along with some older titles. As for the near future, I’m hoping to review Luigi’s Mansion 3, Crash Team Racing Nitro-Fueled, Yooka-Laylee and the Impossible Lair and Mario & Luigi: Superstar Saga as soon as possible. That’s on top of some movie reviews as well, like Joker and Dojo Rabbit (I have no excuse why I haven’t reviewed them yet. Sorry). Also with It: Chapter 2 being released on digital platforms soon, I’ll (finally) get around to reviewing that duology. And of course, Frozen II is a must review for me, and hopefully I’ll have my review for the holiday special Olaf’s Frozen Adventure done before that.

I’ve reviewed most of the movies I’ve seen in theaters this year, with the exceptions of the above mentioned that I just haven’t got to yet (plus Judy. But I may wait to review that one until I get all these things done. No rush on that one). I’ve actually grown quite pleased with ow many movies I’ve managed to review that were released this year. Unfortunately it seems in regards to games, I was still buying more while I was still playing others. As a result, I haven’t finished a number of them and haven’t been able to review as many as I’d like. Here’s hoping these next few months give me the time to make up for lost time.

I’m really going to have to crank these out quickly in the coming days if I hope to stick to my plan of reviewing every Star Wars movie before The Rise of Skywalker releases in late December (sans Solo: A Star Wars Story, which I’ve already reviewed).

What am I going on about this again for? Didn’t I already ramble about this recently?

In short, with no more games on pre-order until Animal Crossing: New Horizons in March, it looks like I finally have a good window of time to catch up on things. And also yay Pokemon and all that!

5 thoughts on “I Has Pokemon Sword!”