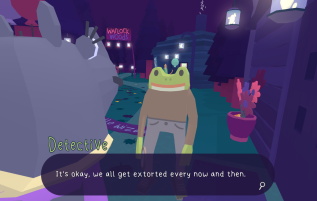 One of 2018’s surprise Indy hits was The Haunted Island: A Frog Detective Game by Grace Bruxner. A (very) simple point-and-click adventure that was more of an interactive joke than a game. Bruxner followed-up her sleeper hit in December 2019 with the release of a sequel, Frog Detective 2: The Case of the Invisible Wizard. Much like its predecessor, Frog Detective 2 may be light on gameplay, but is swimming in so much harmless stupidity and innocent charm that it makes for a fun little game that’s worth an hour of your time if you just want a good laugh.

Like the first game, Frog Detective 2 is short and sweet point-and click game which essentially revolves around a simple trade quest: Talk to the characters in the game, find out what each one wants, figure out who can give you what, and enjoy all of their nonsense along the way. 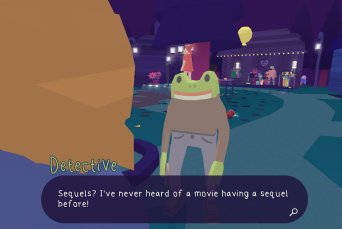 Our hero – the simply-named ‘Detective’ – is on a very tough case: In the small town of Warlock Woods, a new resident has moved in. This new resident happens to be a wizard. A wizard who’s invisible! To commemorate the arrival of the titular Invisible Wizard to their town, the people of Warlock Woods planned a welcoming parade. The night before the parade, however, someone destroyed the floats and decorations. Thus our (Frog) Detective has been called in to investigate the scene and figure out who wrecked the parade. That’s right, The Case of the Invisible Wizard isn’t about the Invisible Wizard themself, but their ruined parade.

Yep, this certainly is a Frog Detective sequel. 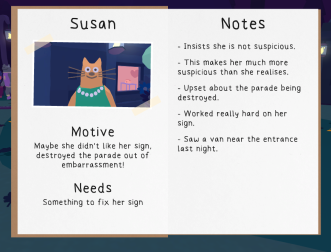 I have to emphasize that, under different circumstances, I probably would not care for a video game that has so little in the ways of gameplay. I’ve played more than my share of Indy titles that try to mask their lack of substance and depth as “minimalism,” or that try to claim that “games don’t need to be fun” as a lame excuse for their lack of actual game. But what wins me over about the Frog Detective titles is that Grace Bruxner uses this same lack of ‘game’ as the basis of a joke. I’m not sure if she intends Frog Detective to be a commentary or parody on the often overly self-important attitude of the Indy scene, but it works as such nonetheless.

There’s an endearing quality to the innocence and stupidity of the Frog Detective games that make them easy to love. They may not be what I would traditionally consider to be “good games,” but their sense of humor and charm are undeniable.

Though Grace Bruxner promised this second Frog Detective game would have “more gameplay” than its predecessor, that in itself is also part of the joke, since the only additional gameplay elements this time around are decorating a notebook with stickers at the beginning of the game, and picking up pies as part of the game’s aforementioned trading quest. Otherwise, the game is – once again – all about the silly dialogue provided by the characters. The non-stop, innocuous humor is complimented by simple, cartoony graphics and an equally simple, jazzy soundtrack. 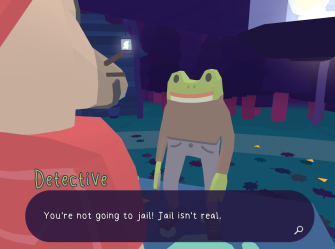 Bruxner’s writing is delightfully absurd, and is reminiscent of early 2010s cartoons like Adventure Time and Regular Show, or internet comics like Axe Cop. It’s void of that self-aggrandizing YouTube humor we see far too much of these days. Instead, Frog Detective just feels like a showcase of its creator’s personality.

Like the first Frog Detective Game, The Case of the Invisible Wizard can be completed in about an hour, and the end blatantly informs us that our (Frog) Detective will return in another sequel. We even get a hint that there might be an overarching villain at play (though I can’t imagine anyone could be too villainous in this game’s world). I do kind of hope that by the time the third title comes out, the Frog Detective games can add a little something extra to the proceedings. But even if they don’t, Grace Bruxner’s unlikely Indy hit series is a uniquely charming experience.