Now let us begin my 2020 video game awards proper (celebrating the video games of 2019). Why don’t we go with tradition and start with the Best Sound category?

Sound effects are among the unsung heroes of any medium, particularly video games. Just imagine Mario grabbing a coin with no shimmering *clink* to accompany it. It just wouldn’t feel right. 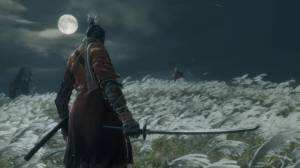 No one in the video game world does sound better than FromSoftware, and that was once again true in 2019 with Sekiro: Shadows Die Twice, which continued the studio’s tradition of pulling players into its world with every last sound effect.

I admit I’m not the biggest fan of Sekiro (though I do hope to get back to it soon), but no doubt it continues the traditions of Dark Souls and Bloodborne of giving a sense of weight to its every creature and object through the sound work.

The clank of armor, the growls of monsters, the sickening sounds of cutting them down with your blade. Sekiro: Shadows Die Twice once again showcases FromSoftware’s mastery of sound design in video games.