Gameplay is the lifeblood of video games. I mean, just think about what video games would be like without gameplay. They’d be really awkward movies, I guess.

Even if all else fails in a game, it’s the gameplay that can ultimately save it. Gameplay is the connection between developer and player that separates the medium from all others. It is of the utmost importance to game design.

Winner: Bloodstained: Ritual of the Night 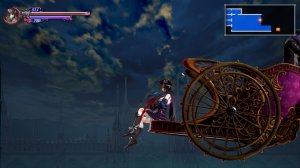 Basically, we have a case of “if it ain’t broke, don’t fix it.” Though many other Kickstarter-funded spiritual sequels came and went, Bloodstained: Ritual of the Night was the one that went all out and recreated the intricate gameplay and sharp level design of the game that inspired it.

Yeah, it might be “more” of the SotN-style Castlevania gameplay, but in a gaming landscape that’s grossly starved of such gaming greatness, Bloodstained is something of a godsend.

Runner-up: Yooka-Laylee and the Impossible Lair