It was with the second entry in the series, Seiken Densetsu 2 – more widely known as Secret of Mana – that the series would really come into its own (and, in my opinion, established itself as Final Fantasy’s better). But the seeds of greatness were planted here in Final Fantasy Adventure on the GameBoy. Though the GameBoy’s limitations do mean that this original entry in the Mana series hasn’t aged particularly well, its ambitions for the time and hardware are nothing short of commendable.

Some fans bemoan the Mana series for its lighter emphasis on story in comparison to Final Fantasy, but seeing as these are video games, I feel that gameplay is the far more important feature. And in that regard, the Mana games stand tall over Final Fantasy with ease. Take the story out of the old Final Fantasy titles, and they are, admittedly, the ‘vanilla’ of RPGs. But by implementing Final Fantasy’s RPG mechanics into gameplay inspired by the Legend of Zelda series, the Mana series feels more distinct and refined as a game. Though, as stated, that mostly applies to the second and third entries of the series, the fact that Final Fantasy Adventure attempted such a feat on the original GameBoy as early as 1991 is an impressive feat in and of itself.

Unlike later entries in the series, the player only directly controls one hero character, though a second, non-playable character will join them from time to time. The layout of the world and control is reminiscent of the original Zelda on NES. With the top down perspective, similar gameplay, world and dungeons. But your character also gains experience points, levels up, gains new weapons, and can improve different stats as the player sees fit, as in Final Fantasy.

For example, it’s often difficult to tell when you’re being hit by an enemy. Your hit points are displayed on-screen via a number, but it’s easy to lose track of it during gameplay. Your character doesn’t react to getting hit by an enemy, like in Zelda, so amidst all the chaos of combat you may not realize when you’re low of health until its too late. At least it’s clear when you’re hitting enemies, so it’s not abhorrent in the same vein as Hydlide, but it definitely doesn’t help the game stand the test of time.

Then there’s the simple matter of the game being way too cryptic. The map screen itself is confusing, with the world map being presented as a squared grid, with the player’s current location being represent by a blinking square, and the towns being represented by houses. Other than those markers, you have no clue where anything is. And with how vague the NPCs are with their advice, you’re often left scratching your head as to where to go next. Even if someone gives you something of an idea of a location, you have no idea where it is because the map is just non-specific squares.

Unfortunately, this grows to become a pretty big issue. There are just too many segments in the game where you’re left wondering what the hell you’re supposed to do. And while the core gameplay is decently fun, it goes without saying that Secret of Man – being a Super Nintendo title – more than perfected the formula. 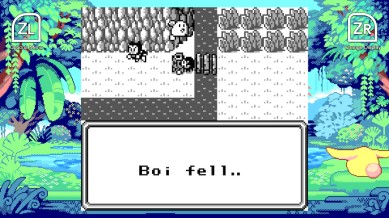 That’s not to say all is bad in Final Fantasy Adventure, however. As a huge bonus, you can save your game at any point during gameplay. How a GameBoy title achieved this while RPGs on the PS2 still demanded players to find specific save points is both a testament to how the Mana series tended to look towards the future, and indicative of how the RPG genre on the whole took a while to move forward. And the soundtrack to Final Fantasy Adventure is one of the few GameBoy soundtracks that still sounds great even by modern standards (that main theme is just lovely).