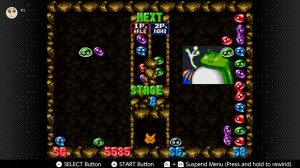 Puyo Puyo is one of the most popular falling block puzzle series in gaming history. So it can be a little strange to go back and see how skittish publishers were with releasing the series in the west. The original Puyo Puyo received a makeover with established gaming franchises on the Sega Genesis and Super Nintendo with Dr. Robotnik’s Mean Bean Machine and Kirby’s Avalanche, respectively. Meanwhile, the second entry didn’t even get a western release on home consoles until it was made available on retro downloadable services like the Wii’s Virtual Console and, most recently, the Nintendo Switch’s SNES Online service.

The gameplay of Puyo Puyo 2 should be familiar to anyone who’s played the series: multi-colored blobs fall from the top of the screen in clumps of two, which the player can move around and rotate. If you match up at least four blobs of the same color together, you will eliminate them from the screen. And if you plan and strategize the placements of the blobs well enough, you can connect more than four of them or even get a chain of eliminations one after the other, with both scenarios resulting in you sending marble-like ‘trash’ blocks to your opponent. The marbles will of course make get in your way, making it more difficult to connect the blobs. But if you can eliminate blobs adjacent to the marbles, you can remove them from your board. But should the blobs and marbles reach the top of the screen, it’s game over.

The adjustments to the core gameplay are minimal, with the biggest difference being that it takes bigger stacks of blobs and more chains of eliminations to send marbles to your opponent than the first game. The minimal changes aren’t really an issue though. Puzzle games are – along with platformers – the genre that represents gaming at its purest, and because of that, they never really lose any of their appeal no matter how much time passes. And Puyo Puyo, I must say, is one of the most fun and addicting of puzzle games.

The major differences here are that the game can be played with up to four players, which was a rarity in the Super Famicom days (it’s actually much easier to play the four-player modes in the Switch release than it was in Puyo Puyo 2’s day). Suffice to say, the more the merrier when it comes to falling-block puzzle mayhem. It should be noted, however, that the Switch release remains untranslated, so unless you can read Japanese, you’ll have to test out the game’s different options to figure out what’s what (there are some clues to the number of players per mode as indicated by the number of blobs next to each, but otherwise it’s a guessing game for sad sacks like me who can’t read Japanese).

The only real issue with Puyo Puyo 2 is the difficulty in its single-player mode. Puyo Puyo is often cited for its difficulty, going back to the Mean Bean Machine days. But the series usually at least gradually gets more difficult as you go. The difficulty of Puyo Puyo 2’s single player mode, on the other hand, feels all over the place. You’ll fight your way through several “levels,” each one comprised of multiple opponents, but the challenge of each individual opponent varies wildly. I’ve beaten the single-player mode a few times now, and there will be certain opponents early on that take me several attempts to conquer, followed up by easier opposition for the next few rounds before I run headfirst into another wall of difficulty.

Unfortunately, I’m not perceptive enough to notice if the easier and harder challenges were consistent with the character who served as my opponent (though I think that might be the case). Whether there is or isn’t that consistency almost doesn’t matter, because the order you face your opponents is done via a roulette wheel (the player can stop the wheel when they choose, but until you’ve chipped away and eliminated the opposition of each round, you’re not likely to land on the baddie you want to face). So again, the game doesn’t so much get progressively more difficult, as much as it is sometimes easy, and sometimes frustratingly hard.

That’s not a deal breaker, however. And suffice to say that the core gameplay of Puyo Puyo 2 is as fun as ever. Plus, with the crisp 16-bit graphics, cute character designs, and catchy soundtrack, Puyo Puyo 2 is yet another puzzler that’s pleasing to the senses. Bring a few friends over to enjoy Puyo Puyo 2 to its fullest. But if you wish to enjoy the game alone, that works too. Just be prepared for a seemingly random difficulty curve.