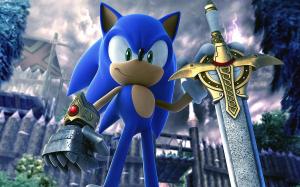 The scenario is basically the same here as it was in Secret Rings: Sonic is transported to another world, in this case the aforementioned King Arthur stories (which are more legend than storybook, but who’s keeping track?). Sonic is summoned by a wizard named Merlina (Merlin’s a girl here because why not?). An evil sword has possessed King Arthur himself, who has now become the infamous Black Knight, and is turning the kingdom to chaos. With the hero of her world now its big villain, Merlina summons a hero from another world to save the day, and that hero just so happens to be Sonic.

So the story is basically the same, but I like the added detail that Sonic just happened to be the hero who was summoned, and that it could have potentially been someone else, as opposed to Secret Rings which had the oddly-specific prophesy of a blue hedgehog being required to save the storybook world. And I like that Sonic is just saving the storybook world here, no “the bad guy will eventually try to escape into Sonic’s world” nonsense.

In regards to gameplay, Sonic and the Black Knight utilizes a similar setup to its predecessor, but with some much-appreciated improvements. For starters, Sonic no longer runs forward automatically. Though the levels are still comprised of long, linear tracks that seem to allow an inconsistent freedom of movement (it’s almost like Sonic is better suited to 2D or something), the fact that the player actually has to move Sonic this time around is already a plus. In addition, jumping works by simply hitting the corresponding button (the ‘A’ button this time around, as Black Knight uses the Wii remote and nunchuck combo). No more holding the button to get Sonic to stop, and releasing it for him to take to the air. You push the button, and Sonic jumps. Beautiful.

The big difference here is that Sonic now wields a sword! Hey, it could be worse, they could have given a Sonic character a gun and had them say minor swears like “damn” in an attempt to be edgy. But I digress.

The sword is used by swinging the Wii remote, though the motion of the player’s movement isn’t matched by Sonic, making it closer to Twilight Princess’s swordplay than Skyward Sword’s admittedly underrated motion controls (though comparing Sonic and the Black Knight to Twilight Princess at all is being exceptionally generous on my part). The sword doesn’t add a whole lot of newness to the traditional 3D Sonic gameplay, but it’s decent. Certainly better than whatever Secret Rings was doing with the start-stop homing attacks. 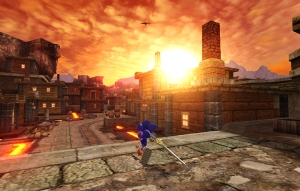 Most stages see Sonic simply going from point A to point B, but some levels feature more unique objectives, like defeating a certain number of enemies or rescuing a certain amount of captured civilians before you reach the goal. These add a marginal amount of variety, but nothing really substantial. The one objective I really did not like, however, involves Sonic having to give some of his rings to the aforementioned civilians. You have to get Sonic so close just to talk to them, and then you have to press one, two or three buttons that appear on-screen, all in a split second. It’s not too bad, but usually these missions have only just barely enough opportunities to give away your rings that, if you fail even one, you’re probably going to fail the mission. It also doesn’t help that the game fails to tell you about how this “mini-game” works (the description I gave above is more than the game feels the need to explain). So when the first time I gave someone rings I needed to press the A button, I assumed that’s all there was to it. So when I instinctively pressed the A button several other times and failed to give the civilian my rings, I was baffled why it didn’t work. Again, it’s not overly difficult or cryptic, but if you’re going to make a mini-game out of something so simple, maybe you should communicate that with the player? Just a thought.

The game also features a kind of item system, where certain items will grant different bonuses when equipped. Like in Secret Rings, you can gain experience points after a stage, though here they are called “Identification Points” and are used to identify items you find within the stages (different items will cost different amounts of IP to “identify”). Once identified, you can equip the items by visiting the blacksmith (Tails) in between stages. It’s admittedly another improvement over Secret Rings, but like that game’s leveling system, it still feels like a missed opportunity to be something more.

Most of the bosses here are Sonic characters reworked into different knights of King Arthur (specifically Knuckles, Shadow and Blaze. I take it Robotnik didn’t want to be a part of another storybook entry). It’s here where the game really slips up. These boss fights are easy in a really bizarre way. Now, there’s nothing wrong with easy boss fights, but what we have here is a special case. You basically commence in a duel with the other Sonic characters, but it seems like there’s no real strategy to them. Knuckles and Shadow both kicked my ass, but I still managed to beat them both on my first try without any real timing or strategy with my swings. Blaze was a slightly more fleshed out fight, but nothing to write home about.

The “final” boss is King Arthur himself (and I put final in quotation marks because this is one of those games that pretends to have post-game content by simply putting the staff credits after a boss partway through the main story, as opposed to actually feeling like there’s more to do once the story is done). This fight is different, and is the one point of the game that’s frustratingly difficult. You chase King Arthur, who is mounted on a horse (in fact he’s on horseback even in cutscenes. Sega couldn’t afford to make a second character model for him I guess).

You have to catch up with King Arthur, despite the fact that Sonic is supposed to be able to run at the speed of sound (at least give me a reason why this horse is faster than Sonic. Even something like “it’s not Sonic’s world so he can’t use his powers to their fullest” would suffice). Once you slash one of the king’s projectiles back at him, you’ll get the energy needed to catch up to him. Once you do, you’re supposed to counter his slashes with slashes of your own, but that’s way easier said than done, because the timing is so quick and precise it makes the aforementioned ring-giving mini-game feel like a Metal Gear Solid cinematic. I kid you not, I had to redo this fight so many times that the next day my arm was sore from swinging it like a madman.

On the plus sides, Sonic and the Black Knight, like its predecessor, is a great looking Wii game that still looks great. It has that cheesy but somehow infectious music that 3D Sonic games are known for. And this game is mercifully shorter than Sonic and the Secret Rings. I completed Black Knight within two play sessions on the same day (or at least completed up to King Arthur, I saw those end credits and figured that was good enough for me to duck out).

Sonic and the Black Knight suffers from many of the same issues as Secret Rings, but just not as badly. Thankfully, the fact that the player actually controls Sonic this time around, and the fact that jumping works so simply make it a far more playable experience. It’s nothing special, and the years since have made it even less so. Perhaps there was some potential in this “Sonic Storybook” idea if it were allowed to continue, but it seems like Sega has long-since abandoned the concept. Though perhaps that’s for the best. After all, when the simple act of pressing A to jump can be considered a vast improvement, it doesn’t exactly say a whole lot for the series.

4 thoughts on “Sonic and the Black Knight Review”