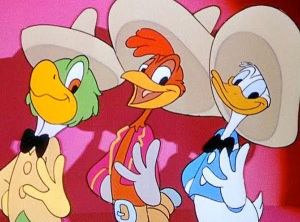 I don’t think you could name a weirder Disney movie than The Three Caballeros. That itself isn’t a bad thing (it has always baffled me that so many people consider “weird” to be a negative connotation). If anything, the weirdness is the saving grace of the film. As the second film in Disney’s oft-forgotten “Package Film Era,” The Three Caballeros is another example of shorter segments haphazardly strewn together and labeled as a ‘feature film’ within the Disney canon.

The Three Caballeros is also akin to being Walt Disney Animation Studio’s first sequel, as it is something of a follow-up to Disney’s previous package film, Saludos Amigos. Not so much in storyline (Disney Animation has only seen three canonical narrative continuations in their entire history, the first of which didn’t happen until 1990), but in that it features Donald Duck in a Latin American setting, and brings back the character of José Carioca the Brazilian parrot.

Like Saludos Amigos before it, The Three Caballeros was a product of a “goodwill tour” of Latin America for the Walt Disney Company commissioned by the United States Department of States in the wake of World War II. While Saludos Amigos was comprised of four short animated segments interspersed with clips of said tour by the Disney animators, The Three Caballeros has a bit more of a connected story linking most of its segments together. And when live-action does show up in Caballeros, it’s weaved in with the animated characters, instead of simply showing the audience who’s making the movie you’re watching.

The “story” here is that it’s Donald Duck’s birthday (which the film identifies as simply being “Friday the thirteenth”), and Donald Duck gets some presents from his friends. Presents that have increasingly surreal properties.

The first two gifts are short films of their own, given to Donald by José Carioca: The first is titled The Cold-Blooded Penguin and tells the story of Pablo, a penguin from the South Pole who wishes to live in a warmer climate, and ends up visiting many places in Latin America to find his new home. The second short is The Flying Gauchito, and involves a little boy in Uruguay who befriends a flying donkey.

These two opening shorts are okay, but much like the segments of Saludos Amigos, they are really nothing special. What’s all the weirder here is that the remaining segments go back to revolving around Donald and his friends (tied together by the loose narrative of Donald’s birthday). This makes the first two shorts feel completely disconnected from the rest of the film, and may leave you scratching your head as to why they were even included in the first place.

Again, the remainder of the film centers on Donald, José Carioca, and Panchito Pistoles, a pistol-packing rooster introduced here who represents Mexico. One additional segment kind of segues away from the beaked trio in telling the story of a group of Mexican children who celebrate Christmas by re-enacting the story of Mary and Joseph searching for a room at the inn, but this segment is narrated by Panchito, who is telling the story to Donald and José, so it’s also still kind of part of the main story.

The remaining segments are where the film gets really weird, with Donald, José and Panchito experiencing different Latin American cultures, interacting with live-action humans (mainly women whom Donald can’t stop lusting after), or being thrown into surrealist situations not dissimilar to the Pink Elephants number from Dumbo.

I honestly don’t know how to describe some of these. The easiest one to explain sees the avian trifecta traveling the beaches of Mexico City, with Donald once again pining for every woman in sight, while José and Panchito try to keep him focused on their travels. The other segments though, are more about spectacle than anything, and can’t be so easily summed up.

One scene involves an extended samba sequence with Donald, José and more real humans. Another sees Donald multiply himself to dance with another live-action woman, who then becomes an animated flower but still retaining the woman’s face. My personal favorite part sees Donald and José inexplicably shrunk so small that Donald can’t open his next present, so José teaches Donald a magic trick to return to their normal size. But I don’t mean the usual kind of Disney fairy tale magic by means of Fairy Godmother or evil witch. What José (and subsequently Donald) does is a bizarre series of movements that results in them blowing into their glowing index fingers to grow back to normal size. The movie’s finale involves Panchito setting a firecracker-packing toy bull loose to attack Donald, with the irritable duck charging headfirst into the bull to ignite the fireworks. Oh yeah, there’s also a hyperactive, gibberish-speaking bird who interrupts the film by breaking the fourth wall on an occasion or two.

Did you get all that?

The point is, the movie is a trip. But it’s that sense of surrealism and outright “what the hell am I watching?” moments that make The Three Caballeros much more enjoyable to watch than its predecessor. Unfortunately, the film’s fragmented structure takes something away from the proceedings, which is only magnified by the first two shorts which feel like they were stapled onto the picture for the sake of padding.

Like Saludos Amigos, The Three Caballeros doesn’t really play out like a movie because of this. Which is a shame, because had Disney used Donald, José and Panchito’s bizarre antics as the basis for a more fully-realized adventure, The Three Caballeros might be an all-time great in the Disney canon (Seriously, why have none of the characters of the “Mickey Mouse universe” ever been trusted to carry an entire movie?).

As it is, The Three Caballeros can be a lot of fun when it has you scratching your head at what you’re seeing onscreen. But the whole package film structure plays against it, making you long for what the film could have been under different circumstances. Disney’s more cartoony animal characters on an epic adventure that’s as wacky and insane as this? Why has that never happened?

On the plus side, José Carioca and Panchito Pistoles have reemerged from obscurity in recent years, so maybe there’s still hope…