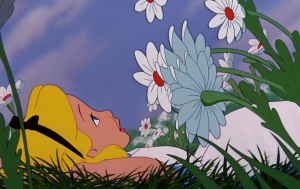 In the 1950s, Disney finally managed to rebound after World War II forced the company into its first dark age. With the sustainability the package films brought to the company, Walt Disney Animation Studios was finally able to resume production on larger animated features. Cinderella kickstarted the “Silver Age” of Walt Disney animation in 1950, and the very next year, Disney followed suite with Alice in Wonderland. This surrealist, nonsensical adventure is based on the Lewis Carroll novels Alice’s Adventures in Wonderland and Through the Looking-Glass, and is appropriately the strangest animated feature from Disney not titled The Three Caballeros. Though this strangeness can be entertaining in its own right, Alice in Wonderland lacks the heart that Disney’s best animated features are known for.

Alice is a young girl with her head in the clouds. As her elder sister Dinah is giving her a history lesson, Alice grows bored and wishes for her own world “where everything is nonsense.” Soon enough, Alice sees a waistcoat-wearing white rabbit claiming to be ‘running late for a very important date.’ Curious, Alice follows the rabbit, and ends up falling down a rabbit hole that takes her to Wonderland, a bizarre place where, sure enough, everything is nonsense.

From there, the movie is more or less a series of strange things happening, as opposed to a coherent plot. I’ve actually never read the original Alice novels (it’s on my to do list), but from what I understand, the Disney film embraces the absurdity of the books, but deviates away from the tone and subtler details (the books have some kind of commentary on mathematics…it’s a whole thing).

Disney’s interpretation is enjoyable enough, with the nonsensical nature of the material leading to some fantastic animated sequences, and plenty of “what the hell” moments to provide some laughs. But Alice never feels much like a character, more like a vehicle to get from one bizarre situation to the next. We probably only get a minute or two to learn anything about Alice before she ends up in Wonderland, and the film doesn’t exactly make much of an effort to establish her character (her brief longing for her own ‘nonsense world’ is literally all we get).

Don’t get me wrong, Alice in Wonderland is a fun film, with its complete removal of logic being a blank canvas for the animators to go nuts with. On the downside of things, the film’s re-releases during the 1960s (the ‘psychedelic era’) has forever given the Alice in Wonderland story an association with drugs, a stigma that extends to the greater fantasy genre even today, much to my chagrin. 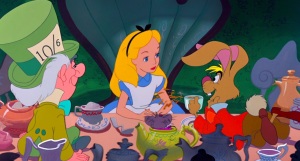 Alice in Wonderland has numerous fun moments: a Dodo telling Alice to run in circles with fish and birds in order to stay dry, all while they’re being pelted with tidal waves (the Dodo is standing on a small hill out of the waves’ reach, a detail he seems completely ignorant to). The same dodo trying to help the White Rabbit get a giant Alice out of his house. Alice encountering the wicked Queen of Hearts, who blatantly cheats in a game of croquet (involving flamingos as clubs and hedgehogs as balls, naturally). And of course, Alice stumbling upon an “unbirthday” tea party celebration held by the Mad Hatter and the March Hare (Ed Wyn’s vocals as the Mad Hatter remain among the studio’s most bluntly hilarious, with many voice actors imitating the performance for similar characters even today).

The problem with Alice in Wonderland is that those “moments” are all it is. There’s no real storyline tying it all together, and as stated, Alice isn’t much of a character at all. The film is a series of fun and colorful sequences, but it lacks any heart or substance to make it anything more. Alice doesn’t grow as a person or gain anything as a result of her adventure. She’s just the mechanism that leads the audience from one weird thing to the next.

To further sully the experience, Alice in Wonderland features an abrupt “it was all a dream” ending, which has always been a pet peeve of mine, particularly for fantasy films. What’s the point? To try and justify the strangeness of its fantasy world by writing it off as a dream? If you think fantasy is so strange you have to write it off as a dream, why even bother making a fantasy film?

Maybe I’m overthinking that a bit. My point is the ending feels like a cop-out. Imagine if Pinocchio ended with its titular puppet waking up from a dream, and realizing he was actually a real boy all along, and his adventure to become one was just a dream. You’d feel kind of ripped off. 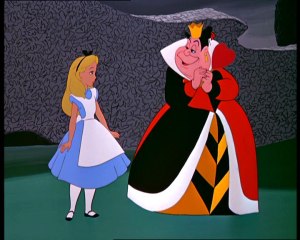 As a kid, I absolutely loved Alice in Wonderland. But nostalgia can only take something so far. While I still think Disney’s adaptation of Lewis Carroll’s stories has enough entertainment value to keep it afloat, thanks to its sheer strangeness and the visuals that come with it, but Disney films – even the most simple ones – usually have something to them. Sadly, that doesn’t really apply to Alice in Wonderland. It makes for an entertaining enough viewing, but it is a bit of a step down from Cinderella, and not quite the Disney classic it’s often made out to be.

A very merry “Unclassic” you could say.