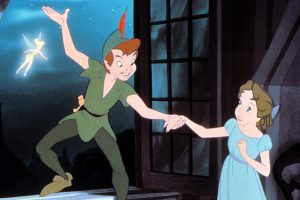 Disney has a way of turning their adaptations of classic stories and fairy tales into the definitive versions of those stories. Though Peter Pan is based on the 1904 play and subsequent 1911 novel by J.M. Barrie – a story which has seen countless interpretations over the past century-plus – when most people hear the name ‘Peter Pan,’ they think of the 1953 Disney film. It isn’t too hard to see why: its combination of whimsical fantasy, colorful characters and joyous imagination in many ways make it the most “Disney” of all Disney movies. Though some glaringly outdated elements prevent Peter Pan from remaining one of Disney’s best.

Telling a story that “has happened before, and will happen again, but this time happened in London,” the film begins at the home of the Darling family. Wendy is the eldest child, and often tells fanciful stories of Peter Pan – a boy who never grew up – to her two younger brothers, John and Michael. Their mother Mary is supportive of their imaginary adventures, while their father George – being described as a “practical man” – is less patient with their games. But the children believe the stories of Peter Pan and his world of Neverland are true.

One day, when George and Mary are preparing for a party, a series of mishaps leads George to lose his temper, and he becomes fed up with Wendy’s stories. He proclaims it’s time for Wendy to grow up, and starting the next day, she is to get her own room, away from the nursery with her younger brothers (what a different time this was. These days, a kid would jump for joy for getting their own room). George and Mary then leave for the party, but not before Wendy tells her mother to leave the window open, as Peter Pan will be coming to reclaim his shadow, which Wendy has locked away after the family dog got a hold of it.

Sure enough, when George and Mary leave the house, Peter Pan flies through the window in the middle of the night, accompanied by the pantomiming pixie, Tinker Bell. Wendy sews Pan’s shadow back onto him (via his shoes, which makes me wonder how his shadow situation works when he takes his shoes off), and Wendy makes a reference that she is to grow up the next day. Peter Pan, who loves Wendy’s stories (because they’re all about him), invites Wendy to come to Neverland, where she will never grow up. Wendy agrees, but only if John and Michael can come along as well. And with a little help from Tinker Bell’s pixie dust, the Darling children find themselves able to fly just like Peter Pan, and they all fly off to Neverland.

From there, the film can feel a little episodic, but it’s nothing too detrimental. We get introduced to the different peoples and locations of Neverland, including mermaids (who are as jealous of Wendy’s relationship with Pan as Tinker Bell is), the Lost Boys (a group of lost children taken under Pan’s wing) and Native Americans who are referred to as “Indians” (more on that in a moment). Most importantly, we are introduced to the villainous Captain Hook and his pirate crew, which includes Hook’s bumbling but gentle assistant, Mr. Smee. 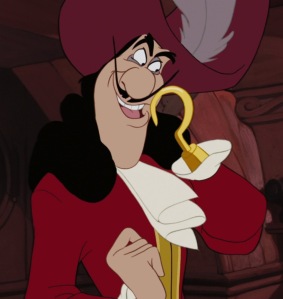 Hook is obsessed with gaining revenge on Peter Pan, after the flying youth cut off Hook’s left hand and fed it to a crocodile (I can’t say I blame him. If some punk cut off my hand and fed it to a wild animal I’d be pretty P.O’d as well). Said crocodile has followed Hook ever since, hoping for the full meal. Thankfully for Hook, the crocodile swallowed an alarm clock, so the sound of tick tocks warn the pirate whenever the beast is near.

Tinker Bell may be the most marketed character from the film (even getting her own spinoff franchise in the late 2000s/early 2010s), but it’s Captain Hook who stands out as one of the best characters in any Disney movie. He’s  one of those great villains who can play both the cartoonish oaf and also be genuinely evil at times (he shoots one of his own men dead for singing a few sour notes). Hook has the perfect combination of comedy, charisma and villainy to make him one of the all-time great Disney villains (Walt Disney even had the ending altered from Barrie’s original story so that Captain Hook survives, as he rightfully guessed audiences would like this Hook too much to see him become crocodile chow). And his interactions with Mr. Smee provide that great domineering villain/unappreciated loyal lackey dynamic, which is always fun.

The film is beautifully animated and filled with color and whimsy. Its flying sequences were arguably the most uplifting in animation until Hayao Miyazaki came along and made it one of his staples. And its filled with some terrific visual comedy (mostly provided by Hook and Smee).

It isn’t difficult to see why the Peter Pan story has resonated so well with children, and even adults: no kid wants to grow up, and most adults long to see the world as they did as children. It’s got magic, pixies, mermaids, flying, animals, adventure and pirates (pirates being one of those things children seem to have an inherent fascination with, like trains or dinosaurs). Neverland is one of those children’s fantasy worlds where it doesn’t focus on one set motif, but is a collection of colorful things to spark the imagination.

By all accounts, a world this imaginative should be timeless. And Peter Pan mostly is. But there’s no way around the elephant in the room: the film’s depiction of Native Americans is stereotypical even in its less offensive moments. The more defensive side of Disney’s fanbase would point out J.M. Barrie’s original story is to blame for the caricatured depiction of Native Americans, but does it really matter who started it when it comes to something like this? The fact of the matter is it’s aged terribly. And well, making a song titled What Makes the Red Man Red, that’s all on Disney.

Yes, unfortunately Peter Pan is one of those old Disney movies that is blemished by the ignorant tropes of the time in which it was released. It’s facepalming, collar-tugging levels of uncomfortable in the moments with the Native Americans. 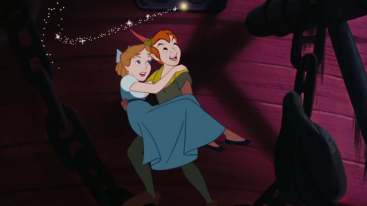 Another outdated element to the film is the depictions of its female characters: Wendy doesn’t exactly showcase much independence at all (in fact, even when she has a falling-out with Peter Pan and is kidnapped by Hook, she is still confident Peter Pan will come to save her and her brothers, as opposed to attempting anything herself). Pretty much every other female character who shows up is defined by jealousy over their relationship with Peter Pan, whether it’s Tinker Bell or the mermaids (heck, even Wendy gets jealous of the Native American princess, Tiger Lily, when she makes Pan blush). Again, you could blame the timeframe the movie was released over the movie itself, but it doesn’t change the fact that the movie was a victim of that time, and that it blockades the film’s potential timeless appeal.

It’s aged stereotypes that prevent Peter Pan from being one of the all time great Disney films, and its often episodic nature also prevents it from being as great as it could have been from a structural standpoint. And that’s a crying shame, because what is good here in Peter Pan, is really good.

Peter Pan is a fun, imaginative adventure, and a good movie. But getting past some of its more outdated elements is, well, you can’t get past them. At least Captain Hook remains a highpoint for Disney Animation.