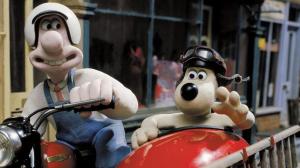 By 1995, Wallace & Gromit had etched their place in the history of animation and in British popular culture. After the acclaimed “The Wrong Trousers,” the popularity of Wallace and Gromit reached new heights. The third adventure of the cheese-loving inventor and his mime-like dog would be A Close Shave, and it ended up receiving similar acclaim to its predecessor.

The next day, Wallace and Gromit are asked to clean the windows of a wool shop owned by a woman named Wendolene. Wallace is instantly smitten with Wendolene, but unbeknownst to him, Wendolene is the owner of the dog Preston, and is the unwilling accomplice of his sheep rustling schemes. Preston is determined to find the missing sheep (whom Wallace later names “Shaun”), and eventually frames Gromit for his crimes. 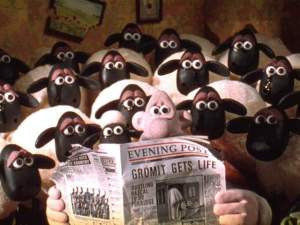 A Close Shave boasted the most detailed plot for the series up to that point. The two prior shorts only included one additional character to Wallace and Gromit themselves (the cooker robot in A Grand Day Out, and Feathers McGraw in The Wrong Trousers), both of which were silent. Wendolene is the first character aside from Wallace to speak in the series, and she is joined by Shaun, Preston, and an army of sheep as part of A Close Shave’s more extensive cast.

The story proves to be a lot of fun, with the additional characters helping to differentiate it from its predecessors, as well as giving the animators even more to work with.

As is the norm for the series, A Close Shave is impeccably animated. The thirty minute short pays homage to action and horror films, and rivals The Wrong Trousers in its absurd attention to detail. Every moment of the film displays the hardwork and craftsmanship that went into every frame, with the action scenes in particular having you scratch your head in wonder how they could ever be made through the process of stop-motion. Much like its predecessor, the climactic action scenes are truly something to behold.

A Close Shave goes toe-to-toe with The Wrong Trousers, and manages to recreate many of the elements that made the duo’s previous two shorts such delights. The plot is still simple and cartoonish, but the delightful animation turns it into something more. It seems whenever the names Wallace & Gromit show up, you can expect Aardman to bring their very best.