In the early-to-mid 2000s, Dreamworks Animation was seen as Pixar’s big rival in the world of CG animated features. Though Dreamworks has had a number of animated hits, their habit of strictly following the template of animated features of their time (both in the 2000s and into the 2010s) combined with what seems to be a willingness to green light every last idea that enters their door (Boss Baby), made Pixar’s inevitable victory in this so-called “war” a foregone conclusion long ago. And with Disney rising to prominence in the CG animation front over the past several years, the idea of Dreamworks being a rival to either of the Mouse House’s two premiere animation brands seems all the more like a distant memory.

That’s not to say that Dreamworks has completely fallen off the map (I still quite enjoy the first two Shrek films and the Kung Fu Panda trilogy), and every now and again they still crank out a good movie.

Case in point: Abominable, a charming and heartfelt animated feature from Dreamworks Animation’s “Pearl Studio” division, a joint venture between Dreamworks and Chinese investment companies. Though even with its charms and emotional strengths, Abominable still ultimately falls short of its full potential by once again adhering too closely to Dreamworks’ rulebook.

Abominable tells the story of Yi (Chloe Bennet), a young Chinese girl who has recently lost her father. Living with her mother and grandmother, Yi has taken to performing odd jobs around town in order to save up money to go on the trip around Asia that her father had always wanted to go on, but died before he had the chance. But Yi’s world is thrown into disarray when she discovers a yeti living on top of her apartment building. Yi soon befriends the yeti, naming him ‘Everest’ (after his home), and is determined to keep him safe.

It turns out this yeti has escaped captivation from a wealthy man named Mr. Burnish (Eddie Izzard), who recently caught the creature on an expedition to Mount Everest, after having searched years for the creature following an encounter with it in his youth. Determined to prove the yeti’s existence after being called a liar his entire life, Mr. Burnish has recruited zoologist, Dr. Zara (Sarah Paulson), as well as a small, private army, to help him reclaim the yeti.

Fearing for Everest, Yi sneaks the Yeti onto a departing ship, but in the spur of the moment, ends up accompanying Everest on his journey home. But Yi isn’t alone on her adventure to escort Everest back to…Everest. Caught in the middle of all the commotion are Yi’s friends from her apartment: Jin (Tenzing Norgay Trainor), a self-absorbed pretty boy, and his younger brother Peng (Albert Tsai). 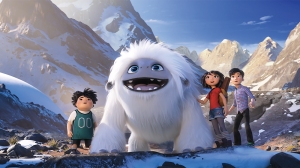 If it all sounds a bit familiar by now, that’s because, well, it is. Abominable is ultimately a good movie, as it tells its story well and by the film’s third act, it hits the right emotional beats. But Abominable is also a movie that can feel like it came off a conveyor belt, as the story it does tell is all too familiar for animated features of today. Granted, I would rather see a predictable good movie than an original bad one, but I can’t help but feel just a handful of tweaks to Abominable’s story structure could have ascended it from being simply a ‘good’ animated feature to a great one.

Again, there’s nothing inherently bad about Abominable. But from the main character’s story with a deceased parent, the friendly, misunderstood creature, the comic relief, and the overall pathway of the story, Abominable is very much following the proverbial animated movie guidebook. I suppose the film does attempt a bit of a twist with its villain scenario, but it seems like many animated films do that these days. And unlike in something like Frozen, where the villain twist had thematic depth that subverted Disney’s tropes, Abominable’s ‘twist’ just seems to kind of happen for the sake of it. Some might point out Yi’s lack of a romantic interest to be of note, but again, that’s become pretty commonplace for animated heroines over the past few years (and it’s something that, once again, Frozen did infinitely better).

It’s the over familiarity of it all which has plagued numerous Dreamworks animated films in the past. While Pixar – Dreamworks’s one-time rival – continue to take animated storytelling to new heights (even if they may not do so quite as consistently as they once did), Dreamworks often seems to simply make due with the status quo. Sure, not every movie can be a masterpiece, and sometimes a lighter, more familiar movie is perfectly fine (and it is here). But I worry that Dreamworks is too okay with ‘perfectly fine’ all too often, instead of aiming for something greater.

By now I’m probably sounding pretty negative about Abominable. But it should be noted that Abominable is a movie I feel bad saying anything bad about. Because it is a charming and heartwarming feature, despite its lack of originality. And I certainly found it a more enjoyable offering from Dreamworks than How to Train Your Dragon: The Hidden World.

While the third entry in the Dragon series felt overly cluttered with a small army of characters (most of whom felt pretty one-note even back in its first installment), Abominable keeps things simple and focused. We have a trio of heroes, a duo of primary villains, and a huggable yeti as the centerpiece. Yi is a likable heroine, and I applaud how the film at first presents Jin as a one-dimensional character who wouldn’t have felt out of place as a secondary character in the Dragons films, but goes through his own miniature story arc that makes him a much stronger character as the film goes on.

The film is also well animated, with memorable character designs and colorful scenery. And of course, every time the yeti uses its magic, the film provides plenty of visual splendor.

Abominable certainly has a lot going for it. Between its sharp animation, charming characters, and genuine heartfelt moments, Abominable should delight children as well as older audiences. But if you’ve seen pretty much any of the better half of Dreamworks’s animated output, you basically know everything you’re getting from Abominable, which ultimately prevents its many merits from shining as brightly as they should.