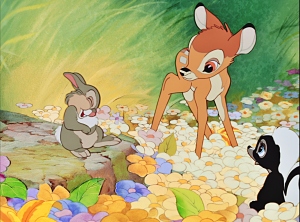 Walt Disney Studio’s fifth animated feature, Bambi, is seen as the last entry in what is often called the “Golden Age” of the studio’s animated output. Though it may not be the best entry in this earliest period of Disney animated features, it still follows its predecessors in delivering a compelling, emotional film.

Bambi is a young deer born in a forest, destined to be the next “Prince of the Forest.” The film chronicles Bambi’s life through the years. He starts as a curious young buck, with the film doing a great job at giving the audience the same sense of wonder Bambi himself has for the discoveries he makes in the forest. He later has to face a great tragedy (in one of the most infamously depressing moments in film history) as part of his transition into adulthood. The film’s later moments see an adult Bambi who – although not entirely without a childlike curiosity – is more ready to take his place as Prince of the Forest. 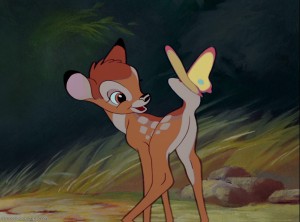 It’s still actually a pretty unique entry in the Disney canon. Although The Lion King would later adopt much of its story aspects, it combined them with a Hamlet-inspired plot. In Bambi’s case, it’s a lot more episodic, and focuses more on important moments in Bambi’s life than it does at delivering a singular storyline.

For the most part, it works wonderfully, as the film is able to capture a wide range of emotions through Bambi’s life (the film is sad and dark as often as it’s cute and happy). Though there are some scenes that can feel like padding to stretch out the running time.

Another minor downside is that none of the songs featured are nearly as memorable as those found in its four predecessors, or a good number of its successors. Maybe it has something to do with the fact that the songs are all in the background, but whatever the reason, the songs, while not bad, don’t stand out in the way great Disney films usually do effortlessly.

In terms of animation, however, the film is a triumph. Disney’s innovative multiplane camera was brought to new heights here, giving a new sense of depth and dimension between the foregrounds and backgrounds, which gives the film a three-dimensional look. And the environments of the film are beautifully realized, as we see the effects the changing seasons have on the forest.

The animals themselves are wonderfully animated. Disney’s animators studied real forest animals during the film’s production, and it really shows. There’s a sense of realness in their movements that, despite their adorable cartoonishness, makes them believable.

To top it off, the film includes some charming characters. Along with Bambi, we also have Thumper the rabbit and Flower the skunk, who provide some good comic relief. Bambi’s mother is probably the character who leaves the biggest emotional impact, however. 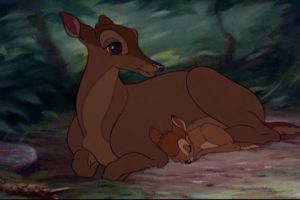 Given the iconic status of the film, it’s no spoiler to reveal the fate of Bambi’s mother, who is eventually shot and killed by a hunter. Throughout the earlier parts of the film, Bambi’s mother (who, surprisingly, is unnamed in the film) is caring and sympathetic. There’s as much realness to her motherliness as there is in the animals’ movements. This makes her ultimate fate all the more impactful and heartbreaking.

Bambi’s looser, more episodic nature does prevent much of it from having the same level of memorability as the other “Golden Age” Disney flicks, but the emotion is just as strong. Bambi definitely comes as an easy recommendation even today. Just be sure to have a box of tissues handy when the time comes.