2018’s God of War – the fourth ‘main’ entry in the series – is both an expectedly and surprisingly great game. Expected because the series had already built a solid reputation for itself in the action genre, and surprising because of how effectively it matures the series in both narrative and in game design. God of War still provides the action you would expect from the franchise, but it’s now complimented by stronger storytelling and character depth, as well as a greater emphasis on exploration and discovery. In a lot of ways, it feels like an ideal example of how to rewrite a video game series.

The obvious difference between this God of War and its predecessors is its setting and mythology. While the series was previously built around Greek myths, Kratos now finds himself embroiled in the worlds of Norse legends. This not only gives God of War aesthetic differences from its predecessors, but also gives its overall world-building a fresh canvas to work with.

A deeper but more subtle difference is Kratos himself, who has grown into a fully fleshed out character. In the past Kratos’ sole motivation was vengeance, and he was willing to slaughter entire armies in order to see said vengeance come to fruition. Kratos now has a son, Artreus, with the protection of his child being at the forefront of the former god of war’s concern.

The motivation for the plot, however, is that Artreus’ mother is recently deceased, and her final wish is for Kratos and Artreus to scatter ashes from the peak of the highest mountain in all nine realms, which sets their epic journey in motion. Although naturally the story builds into something more than that once new characters and threats get involved, the fact that the setup of God of War is simply to fulfill the final wish of a lost loved one is refreshingly personal and simple.

Between the introduction of Artreus and the goal to meet his late wife’s last wish, Kratos has evolved into a three-dimensional character. Wanting to protect Artreus from living the same life of death and destruction as he did, Kratos has kept his true identity as a god from his son. As such, Kratos has learned to restrain his rage, only killing in defense of himself and his son, and doing his damndest to be a good father (despite his cold disposition).

This works on two narrative levels: the first, as stated, is that it has evolved Kratos into a proper character, having shown a genuine sense of growth from the simplistic “raging bald guy” video game archetype he once was. The second is that it almost seems to evoke a sense of meta-commentary on both its own series and, notably, gaming as a whole, and how the medium has matured since the first God of War hit shelves in 2005.

The God of War of 2005 is something that – while a good game – is kind of easy to laugh at in retrospect. Between it’s rage-fueled, vengeance-seeking hero, excessive brutality, and sex mini-games, it was almost a poster child for the gaming trends of the time. But gaming now is a bit less teenage boy-centric with its scenarios, and just as gaming has matured over the years, so too has Kratos.

Though the gameplay of God of Wars past may not share in that unintentional humorous aspect in hindsight, the 2018 PS4 exclusive still saw fit to improve on it. Kratos is now equipped with a frost-based axe that can be thrown and summoned back to his hand, much like Thor’s hammer. Not only is this axe used to slaughter monsters that would do Kratos and Artreus harm, but both its throwing and ice-based abilities are cleverly woven into puzzle-solving throughout the game.

Additionally, there’s a stronger emphasis on exploration than in previous entries, with secret items and side quests scattered everywhere in the game’s world. Though the main story is progressed in refreshingly linear fashion, Sony’s Santa Monica Studios has packed God of War’s world with so much to do that you’ll be exploring it long after the credits have rolled.

Of course, this wouldn’t be God of War if combat weren’t a key element. And even that is given some extra dimension. Both Kratos and Artreus can be leveled up and upgraded throughout the game, with the player primarily controlling Kratos, who can wield his axe or his bare fists – in addition to a later weapon – into combat. Players are also able to send commands for Artreus (who uses a magic bow) during battle with just a few buttons. Additionally, Kratos can build up his “rage meter” to build up energy that, when unleashed, sends Kratos into rage mode (noting that he now has control over his rage, and not the other way around), which temporarily grants extra strength and speed. Both characters learn new moves and abilities as the player advances, bringing a nice RPG sense of progression to the proceedings.

The combat remains as fun as ever, with the various moves and combos you learn along the way adding a good dose of variety to both characters. What’s interesting this time around, however, is that the combat never overshadows how well made God of War’s other aspects are. In past entries, the combat was the undisputed main course. But in PS4’s God of War, puzzles and exploration come into play almost as often.

Sadly, there are a few downsides to the gameplay. A number of puzzles feel recycled throughout the game. And sometimes, the combat sections can drag on longer than they need to. God of War definitely gets an A+ in its balancing act of its different gameplay ingredients (combat, exploration and puzzles), but it can at times feel like its running out of ideas to keep each element fresh. The repetition is never too bad, but it can feel like a means to pad some sections out.

Another issue arrises in traveling throughout the game. You don’t have access to fast traveling until very late in the game, meaning that for most of the journey, you have to either walk or row a boat to your destinations. If you’re only aiming to do the main story, it’s not much of an issue, given the linear nature of the adventure. But even if you wish to do the side content before finishing the game, I think you’re better off waiting until after the main story, as traveling from one area to another can get pretty time consuming until the fast travel option unlocks.

None of these issues are deal-breakers, of course. God of War is too well crafted of a gaming experience for any shortcomings to hinder it too much. The gameplay is incredibly satisfying, especially its fluid combat. And the well-written story and fleshed-out characters add a level of narrative depth that the series lacked in the past.

God of War is an engrossing gaming experience, made all the more absorbing by its stunning visuals and audio. God of War is one of the most visually captivating games I’ve ever played. The realism in the character models is rivaled solely by Uncharted 4 and Red Dead Redemption 2, the creature designs are creative and memorable, and every location is a wonder to behold (why don’t more games aim for snowy landscapes and less on post-apocalyptic wastelands and grungy cyberpunk worlds?). And the musical score, with one sweeping, epic piece after another, really makes Kratos’ journey feel like something special. 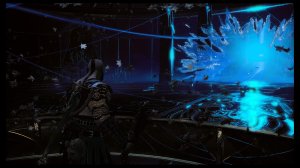 God of War is something special. It not only pushes the PS4 to its limits in terms of technical power (which is abundantly clear with every last stunning visual), but also reinvents its franchise in a meaningful way. Not every gaming franchise has the same ability to reinvent itself as Mario or Zelda. Franchises like Mass Effect and the once-untouchable Halo have fallen from grace. But PS4’s God of War does such a great job at reinventing its franchise that it ensures a bright future for Kratos and Artreus.