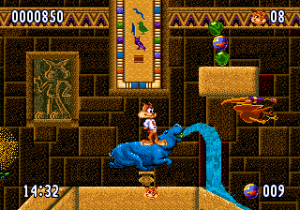 Bubsy the Bobcat is one of the most reviled video game characters in history. The early 90s introduced the world to Sonic the Hedgehog, which ended up being a double-edged sword. On one hand, the Sonic series was (at least for a time) great. On the downside, it opened the floodgates for many developers to try their hand at making an “animal with attitude” mascot character in one generic platformer after another. Most of these characters fell off the radar and were rightfully forgotten about. But the nadir of that lot, Bubsy, was a persistent one, and the obnoxious bobcat starred in four different games that spanned multiple consoles. Though Bubsy 2 on the Sega Genesis isn’t the most panned game in the Bubsy series, it does, in its own way, greatly represent the forgettability of the series.

Bubsy 2 is a 2D platformer, of course. But unlike Sonic, the developers clearly only understood the genre from a first glance perspective, as Bubsy has none of the intricacies in design or polish in gameplay that made Sonic so fun.

You simply need to jump to know that things are off, as Bubsy’s jumps feel slippery, and are hard to control. It’s all too easy to jump over platforms you’re trying to jump on. Bubsy also runs fast (another obvious attempt at ripping off Sonic), but the levels work against the fast speed. There will be instant-kill spikes that pop out of the ground suddenly, electrical fences that will kill you when you run into them, and pools of water that, when stepped on, will kill Bubsy instantly. The game wants you to move fast, but the level design itself actively works against doing just that.

You have to wonder why the game even needed so many one-hit kill objects, considering Bubsy has something of a health meter (a picture of his obnoxious mug in the upper right corner of the scree. At full health it’s making the sassy smirk of a Dreamworks animated character, a concerned face when damaged, and a scared face when you’re one hit away from death).

From the title screen, players have the option of selecting world’s (selecting between the east or west wings of what I assume is a castle, and which floor to start on, with the bottom floors being labelled easy, the middle floors medium, and the top floors as hard). Each world has five themed stages: Ancient Egypt, Medieval, Space, Music and Flying.

The first four categories are your standard platforming fair, with the music stages being the most confusing of the lot, as it seems you bounce around wildly every time you touch anything. The flying stages work like a shooter game, and see Bubsy firing a Nerf gun while flying a plane. I have to give them credit for going for a little variety, but these have to be some of the blandest flying stages I’ve ever seen, made all the worse (once again) by the poor controls and level design. You can only move the plane up or down, and most of the flying stages have passages so tight you basically have to take a hit from a wall or enemy in order to make it through.

This brings me to one of Bubsy 2’s greatest flaws: its utterly confusing layouts for the levels. Bubsy 2 is one of those shoddily-made platformers where it’s hard to discern what you can jump on and what you can’t. Many objects that look like platforms aren’t, and many things that don’t are. Combine that with Bubsy’s slippery controls, and it’s a disaster.

To make matters all the worse, there are really sloppy mini-games spread throughout the stages, which you find by going through doors. The most common mini-game is one where you catapult a frog and try to get it to land on various objects. It’s tedious, and goes on for an un-skippable minute.

Things get really aggravating by the fact that not all the doors lead to mini-games, and some are necessary to go through to progress through the stages, but there’s no way to differentiate between them. Going through the doors is a gamble, and if you enter a mini-game you’ll just feel like you’re wasting your time (again, you can’t simply skip or ignore them once you start them).

I will say that the graphics in the game are decent, though nothing special for the Genesis. Of course you have to compare it to Sonic, in which case there is no comparison, Sonic just looked way better (though I do admit I like the animation on the frogs when they get catapulted). The music and sound are incredibly generic, and Bubsy’s constant attempts at one-liners every time you die or win are just obnoxious.

Even if Bubsy controlled well, the game would still be a mediocre bore. The fact that the game is also plagued by awful controls and level design just make it all the worse. And yet, the Bubsy series was allowed to continue (thankfully for only two more games). It’s hard to say why. I don’t find anything about the character to be appealing. He just comes off as so manufactured and forced. Sure, Sonic didn’t have the most humble beginnings – being tailor-made to compete with Mario – but Sega gave Sonic enough attitude to give him both an edge and likability. Plus, there was something original about Sonic, and it certainly helps that his games were good.

Bubsy, on the other hand, has nothing going for him. His appearance is generic – from his “hey, look, it’s a cartoony bobcat” look to his nondescript, exclamation point shirt. But to really hammer it all home, his personality is just so in-your-face and repellent. He’s like that guy who believes everything he does is cool, but no one around him would ever agree with that sentiment.