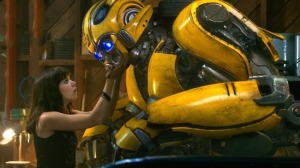 While I would love to wrap-up my review right there for a bit of humor, I suppose a proper review is in order, seeing as Bumblebee accomplished the seemingly impossible and delivered the Transformers movie fans of the franchise have waited for (and deserved) all along.

Let Bumblebee stand as a counterpoint to all the pretentious cynics who dismiss franchise films on the basis of being franchise films. The Transformers film series as helmed by Michael Bay has ranged from passable (the 2007 original) to some of the worst movies ever made (pretty much every entry thereafter). But now, under the direction of animator Travis Knight (director of Kubo and the Two Strings), Bumblebee produces a genuinely entertaining and heartfelt movie out of the very same franchise. Bumblebee is proof that even a big sequel-heavy franchise is still ultimately the work of artists. It all boils down to the filmmakers behind the movies. It wasn’t the fault of the Transformers brand that the movies up to this point have sucked. Under more creative and thoughtful hands, the franchise has now produced a lovingly crafted piece of entertainment.

What separates Bumblebee from the previous Transformers movies is that this film actually has a good, character-driven story (as opposed to the bathroom jokes, racist caricatures and robot testicles of the Michael Bay features). Taking place in 1987, Bumblebee shows the fall of the planet Cybertron – home of the Transformers – as the evil Decepticons have overcome the Autobots. Out of desperation, the Autobot leader Optimus Prime sends his surviving followers across the galaxy, in hopes that the Autobots can rebound at a later time.

One such Autobot, B-127, is sent to the planet Earth. But B-127 has been followed by a Decepticon, and the two wage battle. Though B-127 comes out  on top, he loses his voice and memories from the battle. But before he shuts down, B-127 scans a beetle parked nearby, and assumes its form as a disguise. The aforementioned giant robot fight also happens to take place near a training exercise by a secret government agency, with the ensuing chaos leading Agent Jack Burns (John Cena) to believe that all of these interplanetary robots mean to do harm to Earth.

Later B-127, the robot-turned-car, is found by a junk dealer, which is frequented by one Charlie Watson (Hailee Steinfeld), a young woman with a strong knowledge of mechanics. Charlie is going through a rough time in her life, as she’s still grieving over the loss of her father, while her mother and younger brother have moved on with her new stepfather so quickly that Charlie is feeling forgotten, a point that is hit home when her parents get her some rather uneventful gifts for her eighteenth birthday. So Charlie decides to get something for herself and ends up buying a certain beetle from a certain junk dealer. And when she goes home to repair the beat-up vehicle, it transforms back into its robot self, whom Charlie then names Bumblebee.

As you might expect, there are more Decepticons involved, with two of them, Shatter (Angela Bassett) and Dropkick (Justin Theroux) on a manhunt for Bumblebee on Earth. Meanwhile, Agent Burns is on his own hunt for Bumblebee, in an attempt to neutralize what he perceives as a threat.

Bumblebee’s 80s backdrop doesn’t just serve as the film’s setting, but also a reflection of the movies it pays homage to. This is, for all intents and purposes, a 1980s movie released in 2018. Anyone familiar with the popular films of the 80s should be right at home with Bumblebee, as it follows a very similar structure of the blockbusters of that decade. While the five Michael Bay directed Transformers films felt tonally confused with its insistence on crude humor and over sexualization of what is supposed to be a children’s franchise, Bumblebee’s focus on feel-good nostalgia better compliments its standing as a family film.

Not only do we get plenty of 80s goodness in the music and scenery, but we even get a heartwarming story out of Bumblebee as well. Aside from the Transformers license itself, Bumblebee’s biggest 80s influence seems to be E.T. – The Extra-Terrestrial. Much like Steven Spielberg’s seminal feature told a simple “boy and his dog” story, but with an alien playing the role of a dog, Bumblebee provides a “girl and her dog” story in which the dog is portrayed by a robot. It’s true that the Transformers franchise was created to sell toys, but what many adults fail to remember is how much children love their toys. So while the previous five Transformers films seemed to cynically only see dollar signs in the Transformers property, Bumblebee understands that there should be a beating heart to the story as well, so that the movie can recreate a similar sense of wonder that a kid may have when playing with action figures.

In yet another breath of fresh air for the franchise, the Transformers now actually look like, well, Transformers. Gone are the hideous junk constructs of Michael Bay’s films, and in their place are character designs that are fun and colorful. The past Transformers movie may have had large budgets for their visual effects, but the character designs for the Transformers were so ugly it was hard to care. But here everything looks fun and lively. You actually enjoy looking at this picture. And yes, the Decepticons finally have some color to them as well.

While Bumblebee may play by the 80s movie rulebook in many ways, it ultimately wins us over by the simple fact that it’s a fun movie and (take note Michael Bay) features characters we actually care about. To say Hailee Steinfeld is an improvement over the likes of Shia LaBeauf is like saying jumping will give you more elevation than sitting. She’s downright charming in the role, and gives this franchise a much-needed hero you actually want to root for. Charlie’s ventures with Bumblebee are later joined by Memo (Jorge Lendeborg), Charlie’s next door neighbor who has a crush on Charlie, but is put into a more unique “not-quite a love interest” role. Meanwhile, John Cena’s Jack Burns gives the franchise a (relatively) complex human antagonist, whose hatred for Transformers – Autobot and Decepticon alike – is made into an understandable fear due to his early circumstances in the film, as opposed to the generic “I hate things because reasons” type of villain we’re used to seeing in these kinds of movies.

Bumblebee adds a much-needed soul and genuine sense of fun to a franchise that has been soulless and boring since it made the jump to the big screen in 2007. Though one has to hope that Bumblebee serves as a reboot to the Transformers franchise, as opposed to a prequel (one would hate to think that an enjoyable story such as this would eventually devolve into the schlock that came before it). It may not be the most original blockbuster out there, but like the 80s movies that inspired it, Bumblebee should leave audiences with a big smile on their face when all is said and done.