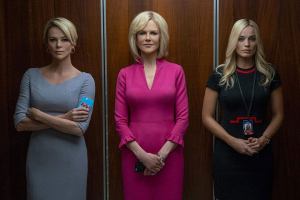 Bombshell is the 2019 biographical drama film that chronicles the 2016/2017 sexual harassment cases against Roger Ailes , the CEO of the Fox News Network, and the women who worked for the network who ended up exposing the story, primarily Megyn Kelly and Gretchen Carlson. The film stars Charlize Theron as Kelly and Nicole Kidman as Carlson, and while the acting is great and this is a relevant, timely story, the good intentions of Bombshell can sometimes get clouded by Hollywood-style creative liberties.

The most glaring such creative liberty being the film’s third central character, Kayla Pospisil (Margot Robbie). Though Margot Robbie’s performance is another highlight of the film, I found myself unfamiliar with who Kayla Pospisil was, since the name didn’t ring any bells. Turns out the reason I couldn’t figure out who she was is because she’s a fictional character, composite of a few different women’s stories from real life. While  adding such composite characters to biographical films is pretty common, it does seem kind of cheap to add a fictional character to a real life story that’s still so fresh in the memory. Especially seeing as the film revolves around three central women, it just feels odd that one of these women isn’t based on any real world counterpart.

It’s probably no surprise that the film mostly focuses on Kelly and Carlson, who played prominent roles in bringing down Ailes (portrayed in the film by John Lithgow in a fatsuit). Ailes is fittingly depicted as a pompous and often paranoid propaganda spewer, though his enforced political biases pale in comparison to his crimes against his female employees. Along with creating a toxic atmosphere for the women working for him, Ailes would eventually be outed for sexual harassment by over twenty women, including Kelly and Carlson.

Bombshell also covers the 2016 presidential election, with its opening moments focusing on Megyn Kelly’s moderation of the Republican debate, and her now-infamous feuding with Donald Trump (or, more accurately, Donald Trump’s immature responses to Kelly’s perfectly reasonable questioning). Megyn Kelly then becomes the target of harassment by Trump supporters both online and in her personal life. And although Ailes at first seems supportive of Kelly (if maybe paranoid at times), as soon as Trump becomes a ratings-grab for Fox News, he quickly shifts priorities.

Meanwhile, Carlson is removed as a co-anchor on the Network’s Fox and Friends program, after she began defending herself against sexist remarks both on air and off. Carlson then meets with lawyers to file a sexual harassment suite against Ailes. But she’ll need evidence and testimony from other women to bring down Ailes. When the case is made public and no other women speak up, Carlson starts to lose face. But Megyn Kelly, having been a victim of sexual harassment in the past, begins uncovering other women who have been victims of Ailes’s in the past, which – in the film – includes the newly-hired Pospisil.

As stated, this is a recent and very relevant story worth telling in a film, and the cast is excellent, particularly of its three leads (most especially Theron) as well as John Lithgow. The film’s focus on some fictional characters and elements does seem to undermine some of its relevance, however. 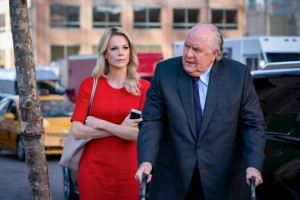 Another troublesome aspect of Bombshell is that it sometimes seems to be using the serious issue of sexual harassment as an excuse to take shots at some of Fox News’s on-air personalities who aren’t guilty of any crimes other than having differing politics than Hollywood, which seems beyond petty. For example, the film has one moment that needlessly takes a stab at news anchor Neil Cavuto, which seems particularly strange given the man’s now-famous spiels against Donald Trump. But he’s a republican, so he has to get some comeuppance! I don’t know, it just seems so petty to throw those kinds of jabs into the film when it’s supposed to be focusing on the much bigger issue of sexual harassment, which certainly knows no partisan politics (funny how we aren’t seeing a similar movie being made about Harvey Weinstein. I wonder why that could be?).

I could potentially write that off as Hollywood being Hollywood. However, there is one scene in the film that ultimately makes me unable to recommend Bombshell. Yes, even though I think the film is well-made in most respects, and makes good use of a stellar cast, there is a single scene in Bombshell which I feel undermines the integrity of the film.

The scene in question happens later in the film, and sees Pospisil – who has since been a victim of Ailes’s sexual harassment – question Megyn Kelly about why the latter didn’t come out about her past victimizations sooner, as it may have prevented the same thing from happening to others. Think about this, for a moment: we have a fictional character essentially victim-shaming the character based on a real person who actually suffered through sexual harassment. This scene may have had a chance to be redeemed, if Pospisil later came to acknowledge that Megyn Kelly is in no way responsible for Ailes’s continued harassment, but no such scene occurs. So again, we have a fictional character (written by a man, no less) putting part of the blame on a real life victim. Despite Bombshell’s merits as a film, this one scene ultimately plays against its very purpose.

The real life Megyn Kelly, when discussing the film, rightfully found the scene in question to be a case of victim-shaming. Although Kelly acknowledged that she could have done more sooner after seeing the film, that in no way makes her responsible for what happened to other victims in any way, shape or form. It’s nothing short of despicable to accuse a victim of any responsibility for the crimes committed against them.

Again, I can’t help but feel this is a case of petty politics getting in the way of something much bigger and more serious. It’s like the film is saying “yeah, these women are victims and we should feel sympathetic, but they’re still conservatives so we can’t feel too sympathetic.” Bigger picture here, people!

I do have to reiterate that Bombshell is a well-made film, and I appreciated it for the most part. But because the film needlessly wags its finger at one of the real life victims of the story it’s covering, I feel I can’t really recommend it. Though the story and issues Bombshell is dealing with are timely, this is a rare case of a single scene undermining that story and those issues.