2019 was an interesting year for films. Though it provided a few great movies, and fittingly capped off the movie decade in regards to franchise closures for Avengers and Star Wars, it was also a year that really magnified the disconnect between “serious” Hollywood and the moviegoing public. Not only were films that pandered directly to critics lavished with predictable praise – resulting in the baffling acclaim towards films like Once Upon a Time in Hollywood, a virtually plotless bore – while popular movies were widely ridiculed for being just that (as is evidenced by Martin Scorsese’s blatantly ignorant statements against Marvel films being met with acclaim by the filmmaking community, who applauded contempt for the average moviegoer like a bunch of trained seals).

Often at the heart of this disconnect was Rian Johnson, who in 2017 divided critics and audiences to a whole new degree with his take on Star Wars, The Last Jedi. Critics lauded the film for its supposed “subversion of expectations” and how it painted a normally ethereal series with a more hard-edged, cynical brush. Meanwhile, fans tended to feel The Last Jedi was so desperate to “subvert expectations” that it both abandoned logical narrative choices and betrayed character personalities.

Granted, The Last Jedi also exposed the more cancerous side of the Star Wars fandom, but critics often used that unsavory corner to blanket the entirety of The Last Jedi’s critics. If you didn’t like The Last Jedi, you weren’t simply a disappointed fan who felt the film undid all the goodwill J.J. Abrams did for the series with The Force Awakens, but you were automatically lumped in with the more toxic fans of the internet as an easy means to be discredited, thus allowing “serious Hollywood” to stroke its ego all the more.

This made the warm critical reception of Rian Johnson’s follow-up film, Knives Out, a foregone conclusion. But like all too many of 2019’s critical darlings, Knives Out is a film that feels undeserving of its ludicrous praise.

I admit I went into Knives Out with high hopes. I honestly can’t remember the last time I saw a whodunnit murder-mystery in theaters, and with a pretty stellar cast, Knives Out looked like it could have been the shot in the arm Hollywood needed to resurrect a long-dormant genre.

Unfortunately, Rian Johnson’s obsessive desire to “subvert expectations” once again shows up at the expense of a fluid narrative. After a strong opening act, the film takes a sharp detour in both genre and structure that robs the film of much of its potential enjoyment. It may pick things back up a bit by the end, but by that point, it’s too little too late for Knives Out. 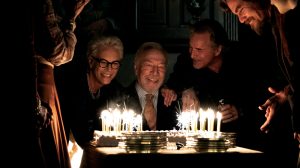 The film starts off well enough, with wealthy mystery novelist Harlan Thrombey (Christopher Plummer) being found dead on the night of his 85th birthday by one of his maids, in what appears to be a suicide. Despite this, an anonymous party hires the aide of detective Benoit Blanc (Daniel Craig) to investigate the scene, suspecting foul play.

It seems just about everyone who attended Harlan’s birthday celebration is a suspect, with Harlan making enemies with just about his entire family.

Harlan fired his youngest son Walt (Michael Shannon) from his position as the CEO of Harlan’s publishing company, and threatened to expose the affair of his son-in-law Richard (Don Johnson) to Linda (Jamie Lee Curtis), Harlan’s eldest daughter and Richard’s wife. Harlan also removed his lazy grandson Hugh “Ransom” (Chris Evans) from his will, and cut off the allowance of his daughter-in-law Joni (Toni Collette), after discovering she had been stealing money from him.

Benoit Blanc interrogates each member of the family, including grandchildren Meg (Katherine Langford) and Jacob (Jaeden Martell), as well as the housekeeping, most notably Marta Cabrera (Ana de Armas), who was Harlan’s caretaker and nurse, and probably the person Harlan was closest to in his later years.

Marta has a unique quirk that makes her a valuable asset in Blanc’s investigation: she gets sick when she lies. That’s not a metaphorical attribute, but she literally gets sick to her stomach and vomits from the stress and guilt of lying. Because of this, Blanc has Marta aide in his investigation, but Marta might know more than she’s letting on about what happened on the night of Harlan’s death.

Honestly, this aspect of the film is very well done. We get a good setup for the premise, most of the characters get a decent amount of time to showcase their personalities in their initial interviews with Blanc, and Marta’s presence – and unique ailment – add a fun twist to the proceedings. The first act suggests that maybe Knives Out is indeed the revitalization of the whodunnit it marketed itself as.

Then we abruptly get a revelation about Harlan’s death that kind of spoils the fun. Without spoiling too much, this particular revelation is only part of the bigger story, with the film letting the audience know there are additional details lying in wait. But once this revelation takes place, the whole ‘whodunnit’ premise that the film brags up so strongly largely disappears, and Knives Out instead becomes more about suspense than mystery. Sure, there are a few details about Harlan’s death that need solving, but because the film gives us a fakeout reveal pretty early on, all the other potential suspects become considerably less important, which makes an otherwise great cast feel sorely underutilized.

The film also has a bad tendency of breaking the “show, don’t tell” rule of visual mediums, by means of literally telling the audience who these characters are, instead of letting the characters’ reveal their personalities themselves. For example, Harlan’s grandson Jacob is often referred to as an “alt-right troll” and a “fascist” by his family, but all the character does is stare at his phone the entire film. I get that the implication is that he’s being a troll online, but because the character doesn’t do much of anything else but stare at his phone, he may as well be checking his email or looking at models on Instagram. You can’t just have the character stare at the phone the entire movie and have other characters say that he’s a stupid little punk. Make him a stupid little punk!

Sadly, after the film’s strong opening, much of Knives Out feels similarly dumbed down. Though the early parts of the film make a genuine attempt to make the audience think any member of Harlan’s family could have committed the crime, as the film goes on it’s so desperate to throw us off the scent of one particular character, that it becomes apparent that no one else could have done it except THAT character. That’s a rookie mistake in any murder mystery.

Again, the film does pick back up during its finale and the ultimate reveal, but by that point, the damage has been done. When Knives Out works well, it works very well – with sharp writing, great performances (particularly by Craig and Plummer), and a fun mystery…when it’s a mystery – the problem is that Rian Johnson’s need to “subvert expectations” through twists and turns ultimately ends up getting in the way of the films stronger aspects. Knives Out is a whodunnit in a time when such a film even existing is a rarity, yet it feels compelled to try and change up a genre that is the exact opposite of oversaturated in today’s movie landscape. It’s like digging up buried treasure, then emptying the treasure chest and putting different treasure inside. It’s like, okay, you already found buried treasure, what was the point of changing it?

To be fair, certain twists work fine (again, having a character who literally can’t lie without being found out is a fun little gimmick), but when one of those twists is blatantly revealing the majority of the murder details early on in a murder mystery, it makes the films other elements suffer. I can’t help but think Knives Out would have been a much better film if it were willing to just be what it is, and allowing the characters’ personalities to make it standout, instead of trying to reinvent a genre that already feels like a breath of fresh air in this day and age just by showing up. Knives Out is so busy trying to add twists and turns to the whodunnit genre that much of its middle act loses that whodunnit identity.

Had it stayed the course and focused on Blanc’s interrogations with the Thrombeys and their associates for the entirety of the film, Knives Out could have been something special: a whodunnit with several colorful personalities making the mystery more and more intriguing. Instead, by desperately trying to “subvert expectations,” Knives Out willingly abandons  its best elements just as it gets going. And by the time it picks the pieces back up, most of its characters haven’t developed past what we saw of them in their introductions, a great cast feels underutilized (why wasn’t Jamie Lee Curtis in more of this movie?), and the potential kind of feels wasted.

Knives Out has moments of brilliance, and word has it a Benoit Blanc sequel is already in the works. I can imagine that character being in a great movie, but unfortunately, Knives Out isn’t it. In this day and age, when everyone seems to be believe twists and turns automatically equate to originality and creativity, Knives Out is a reminder that, sometimes, you can better unleash your own creativity and voice if you aren’t trying so hard to reinvent the wheel.

You really don’t have to be Benoit Blanc to figure that out.