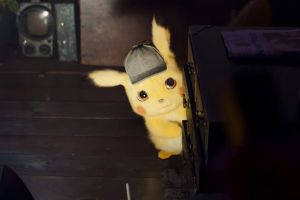 At long last, the video game movie curse is lifted!

Ever since the 1993 Super Mario Bros. live-action film introduced the world to cinematic video game adaptations, the genre has – somewhat uniquely – never really been any good. At least the earlier adaptations had something of an excuse, as they were trying to figure out a way to take video games, (which by nature are quite different than movies) and translate them to movie audiences. As the years went on and video game movies never got any better (and in fact, often got worse), it seemed like game-to-movie adaptations were nothing but a failed novelty. Sure, there were a few video game movies here and there that perhaps appealed to the fans of the games (Mortal Kombat comes to mind), but it would be difficult to call them good movies unless you fit snuggly into the franchise’s established fanbase. But now, we have Pokemon Detective Pikachu, the first honest-to-goodness video game movie I would call a ‘good movie.’

Obviously, this live-action/CG hybrid is based on Nintendo’s beloved Pokemon franchise. While plenty of animated Pokemon films have been released over the years, they have all been direct continuations of the TV series (even if they don’t always share the same continuity). Pokemon Detective Pikachu, however, is not only the first live-action Pokemon movie, but the first one to be directly adapted from one of the games (interestingly, the film is based on a relatively obscure spinoff title in the franchise, the Nintendo 3DS’s Detective Pikachu).

What makes Detective Pikachu work so well may sound obvious, but it’s something that has eluded Hollywood’s video game adaptations for decades: It embraces and respects its source material, while telling a cinematic story set in that world. Because of this, Detective Pikachu  will delight fans of its franchise, and should even win over audiences who may not be overly familiar with the games or TV series, because it tells a good story.

So many video game movies come across as being embarrassed that they’re based on video games, and don’t seem to give much effort into being good movies, either. Pokemon Detective Pikachu feels tremendously refreshing with how it delights in indulging the world of the Pokemon series.

The story centers around Tim Goodman (Justice Smith), a young insurance salesman with previous dreams of becoming a Pokemon trainer. Tim has an estranged relationship with his father Harry – a famous detective of Ryme City – due to what Tim perceives as his father’s preference for work over his son, particularly after his mother passed away while Tim was still young. But one day, Tim gets a distressing call. His father, it seems, has perished in a car accident while in the midst of a case. 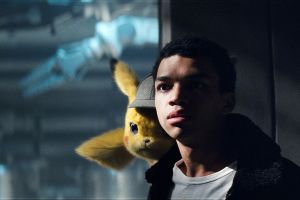 Tim travels to Ryme City to gather his father’s belongings, but while there, he stumbles across a most peculiar character: a Pikachu capable of speaking human language, though only Tim is able to hear him (everyone else hears the iconic squeaks of “Pika Pika Pi!”). This is Detective Pikachu (Ryan Renolds), the Pokemon belonging to Tim’s father.

Detective Pikachu was involved in the crash that supposedly claimed the life of Tim’s father, and is suffering from amnesia because of it. Despite his busted memory, Detective Pikachu remembers one important detail; Tim’s father is alive. After a bit of convincing, Detective Pikachu manages to sway Tim into helping him discover the mystery of what happened to Harry, and to solve whatever case he was working on at the time of the crash. The duo soon becomes a trio, as they are joined by Lucy Stevens (Kathryn Newton) a plucky junior reporter trying to become a serious journalist, as well as her Pokemon partner, a Psyduck (so I guess it’s a quartet).

It’s a simple detective mystery plot, but it makes for a good story thanks to the likable characters (particularly Pikachu himself, with Ryan Renolds giving a terrific vocal performance as the iconic character), as well as its embracing of the Pokemon license as a whole. Indelible elements of Pokemon lore find their way into the plot, with the film both paying respects to its license and also utilizing it for the benefit of its writing (the film finds plenty of ways to bring out humor in its creatures). Pokemon Detective Pikachu is a charming film for established fans and newcomers alike. 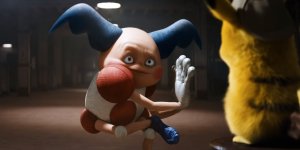 It’s hard to believe the original reveals for the various CG designs of the Pokemon were met with backlash, because honestly, they’re really faithful recreations. Pikachu looks like Pikachu, Charizard looks like Charizard, Psyduck looks like Psyduck. The CGI of the film is impressive, and the fact that they stayed true to the character designs of the games is admirable (ain’t that right, Sonic?). Perhaps the only one that still throws me off is Jigglypuff, who is given fur in the film, but I always figured had more of a balloon-like quality. But that’s not much of an issue, especially since Jigglypuff only shows up for its expected joke (singing karaoke at a bar, and putting the patrons to sleep). One mixed visual element may be Ryme City itself, which may look a little too dark at times – leaning into its Film Noir aspect perhaps a little too much – but the many different Pokemon keep the cute and colorful aspects of the franchise well intact.

Pokemon Detective Pikachu admittedly has its faults, with the most notable being its somewhat fragmented structure. While the film is always charming, it can feel tonally episodic. The film’s elements of action, emotion, comedy and mystery seem separated into their own scenes (“this scene’s a funny moment!” “This part’s an action scene!” “This scene has emotion and drama!”). It’s never bad, but you do kind of wish Pokemon Detective Pikachu could better blend its different elements together (Pixar comes to mind) instead of feeling so fragmented. Still, that’s ultimately a small price to pay when you remember that – by God! -Detective Pikachu is a video game movie that’s actually good.

It’s not just that it breaks the video game movie jinx that makes Pokemon Detective Pikachu stand out, but also in the possibilities it opens up for franchise filmmaking. Back in 2017, The Lego Batman Movie accomplished something similar, showcasing a Batman feature that could take its franchise in a brand new direction without affecting the integrity of the license itself. And I think Pokemon Detective Pikachu accomplishes something similar. 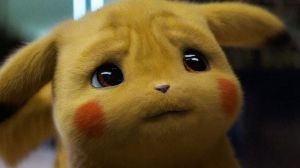 A sequel has already been confirmed, but I hope that Detective Pikachu begins a new trend of Pokemon movies altogether. Some Pokemon movies can be sequels and share continuities, while others could be standalone features with their own styles and tones. The only common link would be that they use the overarching Pokemon mythology as a backdrop. Why not have a Rocky-style feature about an up-and-coming fighter and his Machamp? It really is a franchise that can have so many different creative voices.

Pokemon Detective Pikachu is a cute and charming family feature, one that brings a merciful end to the video game movie curse, while also (hopefully) acting as the start of a new sub-genre of franchise filmmaking.