Whoa whoa! DKCR is already nine years old? Where the hell did that time go?!

Yessir, the Donkey Kong Country series is now twenty-five years old. If I may give my two cents, I personally think DKC is probably the best all-around 2D platforming series. DKC2 and DKC: Tropical Freeze, in particular, should rank as some of the greatest platformers ever made.

Originally a trilogy created by Rare on the Super Nintendo, Donkey Kong Country was later revived by Retro Studios on the Wii and Wii U/Switch with two additional entries. Whether under the creative minds of Rare or Retro, Donkey Kong Country has provided some of the best 2D platforming experiences.

Between the phenomenal gameplay, masterful level design, and perfect, perfect music, the Donkey Kong Country series should rank alongside The Legend of Zelda and Super Mario as one of Nintendo’s finest.

Happy birthday, DKC! Can Tropical Freeze get a sequel now?

As part of my continued celebration of Donkey Kong Country 2’s twentieth anniversary, I thought it’d be fun to make a top 10 list of the Kongs themselves. That is to say, the simian characters who have appeared throughout the series.

Of course, there are a total of thirteen Kong characters who have appeared throughout the series, so I may as well say the three who won’t be appearing here from the get-go. Tiny Kong won’t be on here, because she’s just an unnecessary and sucky version of Dixie. Chunky Kong also won’t be here, because he’s just an even dumber version of Kiddy Kong (why didn’t DK64 just reuse the characters from DKC2 and 3 instead of making goofy replacements for them?). And Candy Kong won’t be here. Because eeewww.

Now with that out of the way, here are the top 10 Kongs from the Donkey Kong series!

END_OF_DOCUMENT_TOKEN_TO_BE_REPLACED

When Donkey Kong Country became a massive success in 1994, it was inevitable that it would get a sequel. Little did gamers know that said sequel would arrive the very next year. With such a relatively short development time, DKC2 could have easily been little more than a cheap cash-in. Instead, it ended up being one of the greatest sequels in video game history, and twenty years later, it can still safely make that claim.

The original Donkey Kong Country is a classic in its own right: It had revolutionary visuals, an unforgettable soundtrack, and some of the most fun platforming gameplay of its day. Still, there was room for improvement, with the overall experience being simple and straightforward when compared to something like Super Mario World, not to mention the dull boss fights.

Donkey Kong Country 2: Diddy’s Kong Quest not only ironed out DKC’s rough edges, it also improved everything its predecessor accomplished, and added a sense of gameplay depth that makes it one of the few 2D platformers – if not the only 2D platformer – that could better Mario at his own game.

The most immediate difference players will notice between DKC2 and the original is the absence of Donkey Kong. The subtitle of “Diddy’s Kong Quest” is more than just a brilliant pun, as this game took DK’s sidekick and put him into the spotlight. The big ape himself has been kidnapped by K. Rool, with the villainous crocodile now going by the monicker of “Kaptain” to reflect the new pirate motif of his minions.

DKC2 retains the tag team style gameplay of the original, however, as Diddy is now paired up with his girlfriend Dixie Kong. Though Diddy and Dixie are closer in size and appearance than DK and Diddy were, they are actually more distinct gameplay-wise. Diddy retains his faster movement and farther jumps, while Dixie – the most useful Kong to this day – can use her ponytail to glide and make her landings precise.

An addition has been made to the tag team setup, as Diddy and Dixie can now climb on each other’s shoulders for team-up moves, with the currently-controlled Kong able to throw their teammate to defeat enemies or reach places that are otherwise unreachable.

The addition of Dixie and the team-up moves add extra layers of depth to the experience, and makes the gameplay stand tall over its predecessor. 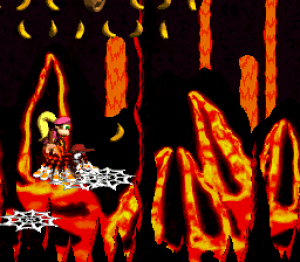 Then there are the Animal Buddies, who are more versatile and instrumental this time around: Rambi the rhino returns with a new charge attack, as does Enguarde the swordfish with a similar new move. Squawks the parrot has seen a complete overhaul. No longer confined to holding a light on a single level, Squawks is now big enough to carry Diddy and Dixie in his talons and fly to great heights, and can spit projectiles at enemies. Winky the frog has more or less been replaced by Rattly the rattlesnake, who betters his predecessor’s jumping capabilities. Then there’s Squitter the spider, who can take out enemies from a long distance and create platforms with his webs.

Donkey Kong Country was a success in large part due to its visuals, which were a revelation in their day. It shouldn’t be a surprise that DKC2 upped the ante in this area, with a wider array of colors, more detailed backgrounds and visual effects, and even more fluid character animations. But the technical advancements are merely a bonus, as the art direction proves to be the game’s real visual treat.

Whereas the action of Donkey Kong Country took place on Donkey Kong Island, with locations that were to be expected from a platformer starring simians – such as jungles, forests and snowy mountains – the adventure of Donkey Kong Country 2 takes place on K. Rool’s home turf of Crocodile Isle, which serves as a dark, gloomy, and melancholic contrast to platforming norms.

Crocodile Isle will see Diddy and Dixie venture across pirate ships, volcanoes, thorny mazes, giant beehives, and dilapidated amusement parks, to name a few of the game’s locations. Even when it uses familiar themed environments of the platforming genre, it puts new spins on them. When you make it to the game’s forest world, for example, it’s an haunted forest filled with ghosts and skeleton crocodiles. The game’s seven worlds usually have a primary theme, but are not restricted to them, with Rare wisely employing a variety of stages within each world.

It’s in the levels themselves that the creativity shines brightest. There’s a sense of imagination stemming from every level that’s rarely approached in gaming, with every stage presenting new gameplay ideas that still feel fresh and original today. Many levels are built around a unique hook, like controlling your jumps through gusts of wind or racing a series of Kremlings on a roller coaster, that are utilized to their fullest and then gracefully left behind after their level is done. Every stage of Donkey Kong Country 2 is swimming in creative ideas, and the game knows better than to let even one of them overstay their welcome.

The boss fights greatly benefit from this new sense of creativity. Where the first game enlarged regular enemies, had DK and Diddy bounce on their heads a few times, and called it a day, DKC2 instead presents a more varied and challenging rogue’s gallery of big bads, with even those that fall under the “big enemy” category bringing a unique challenge to the game.

Though Donkey Kong Country was always a challenging game, it was here that the series became known for its great difficulty. Each world of DKC2 is considerably more challenging than the last, and a host of secret levels are among the toughest obstacle courses in any platformer. But never once does the game feel unfair. The challenges stack up reasonably, and continue to grow as you get more accustomed to them. The difficulty curve is pretty much perfect.

Additional challenge and depth has been added through the game’s collectible items. Though bananas, balloons and the K-O-N-G letters all return to give Diddy and Dixie extra lives, the new items have a greater range of uses.

Banana Coins are a common new item, and are used as currency for the Kong characters who appear on the world map: Cranky Kong gives tips on the levels’ secrets, while his wife Wrinkly Kong saves your progress and gives advice on the game’s basics. Funky Kong can take you to any previously visited locations, and the aptly-named Swanky Kong hosts a quiz show that gives Diddy and Dixie the chance to earn multiple extra lives.

The two big new collectibles in the game, however, are the Kremkoins and Donkey Kong Coins. The Kremkoins are won in the game’s bonus stages (every level has one to three), and are traded to a Kremling turncoat named Klubba for access to the Lost World, where the aforementioned secret levels await. Fifteen Kremkoins are required to visit each level within the Lost World, which makes hunting down and completing the bonus games a much more worthwhile and rewarding endeavor this time around.

Every level in the game also houses a single Donkey Kong Coin, which must be located in order to obtain a full one-hundred (and two) percent completion (as well as earn the right to be called a video game hero by Cranky Kong).

Getting through the game itself is already a great challenge, but if you’re going for full completion, Donkey Kong Country 2 remains one of the toughest games to appear on a Nintendo platform.

Donkey Kong Country was already a platformer with a strong sense of atmosphere, and this is but another category in which the sequel outshines it. I’ve already touched on the visuals and art direction, but what really gives DKC2 its unique soul is its soundtrack.

The music of Donkey Kong Country 2 is composer David Wise’s opus, and combines memorable melodies with ambient sounds that give the game a mood that’s all its own. The music of DKC2 perfectly captures the sense of urgency of this quest to save a fallen hero, while also reflecting the game’s often dreary environments beautifully.

The soundtrack works in a wonderful contrast to that of the first game, with the more swanky and energetic score of the original being replaced with more somber and menacing tunes (you need only to listen to the tracks that accompany the world maps of both games to understand the drastic change in tone). In one of the game’s subtle works of brilliance, the most beautiful and soothing tracks usually accompany the most difficult stages, which encourages you to keep trying your hand at them in hopes of triumph, instead of giving up on them in a fit of rage.

Donkey Kong Country 2: Diddy’s Kong Quest is one of the best and most creative platformers ever made, and a perfect example of what a video game sequel should be. It betters everything its predecessor did right, while also correcting whatever missteps it had. And it does it all with a tone that is entirely its own, combining cartoony characters with a world and soundtrack that’s dark and melancholic.

You won’t find many games that are built so strongly around such contrasts, and none that execute them better, or provide this much fun while doing it.