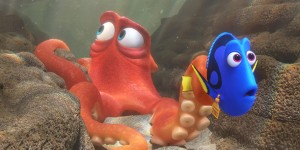 Its becoming something of a trend for Pixar to focus its sequels on the sidekick characters of their films. On one hand, this makes sense, as original films often end with a good deal of closure, and the stories of their main character and plot don’t lend themselves for particularly interesting continuation. Then of course there’s the fact that the sidekicks tend to be the most popular characters in any Disney or Pixar movie. From the days of the Seven Dwarfs all the up to the present with Frozen’s Olaf, the “Disney sidekick” has become something of an archetype of its own, and regularly provides a film’s most iconic character.

On the other hand, focusing a story on a character that wasn’t intended to be at the center of things can be a risky move, as was proven with Cars 2, which showed that Mater was a character created solely to provide comic relief, and could not carry a story as its central focus.

Thankfully, Dory is far more of an actual character than Mater ever was, and showed a wider range of actions and emotions within Finding Nemo. And her presence at the heart of its sequel only reveals what a compelling character the regal blue tang really is.

While Finding Dory could have simply been a cash-in sequel banking on the character’s popularity, it is evident from the very first scene that Pixar and director Andrew Stanton brought their A-game when developing the sequel to what is likely the studio’s most beloved film. 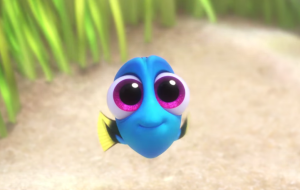 The opening immediately gives Dory (Ellen DeGeneres) a whole new depth. Her short-term memory loss, which was a source of comedic relief in the first film, is now revealed to be a far more serious disability, as the scene depicts a moment from Dory’s childhood where her parents try to teach her different ways to deal with her problem should she be separated from them (to varying degrees of success). As anyone who has seen the first film knows, Dory is eventually separated from her parents, with her memory loss making her forget where they are and, eventually, who they are.

It’s an effectively emotional opener that is especially notable for how it turns two comedic aspects of the first film into great backdrops for its own story. Along with Dory’s recurring memory loss, her passing reference to not knowing the whereabouts of her parents was little more than a punchline in Finding Nemo. Yet that small reference and Dory’s forgetful nature have been turned into something deeper, and successfully manage to carry this long-awaited follow-up.

After the first scene, the film picks up one year after the events of the first film, with Dory living among Marlin the clownfish (Albert Brooks), his son Nemo (Hayden Rolence) and many other fish. One day, while spending the day with Nemo and his friends as they visit a stingray migration for a field trip, Dory is reminded of a past event in her life, brining back memories of her parents in the process. She then remembers that she was searching for her parents before she ran into Marlin during the first film, and begins missing her parents all over again, and thus continues her search for them.

Admittedly, the events that lead into Dory’s continued journey to find her parents feels a little rushed, but it is a small price to pay for when said journey pays off. Marlin and Nemo accompany Dory on her adventure, which at first almost seems to be a retread of the events of the original film as they begin their search across the ocean. But it is soon revealed that Dory was not always from the ocean, and that her parents still live in a marine life institute in California, where she was born. It’s in this marine life institute where most of the film’s action takes place.

Finding Dory manages to greatly differentiate itself from Finding Nemo largely due to the change in setting. While the ocean certainly provides plenty of room for multiple adventures, this sequel is wise to change things up. While Finding Nemo was more akin to an on-the-road adventure, with a new character around every corner, Finding Dory is more focused on the main characters and their stories than it is on the scope of the adventure. 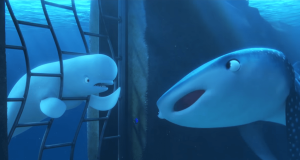 That’s not to say that no new characters come into play. Joining Dory, Marlin and Nemo are a new set of characters who prove to be every bit as memorable. A near-sighted whale shark named Destiny (Kaitlin Olson) and a worrying beluga whale named Bailey (Ty Burrell) are old pals of Dory (explaining her ability to “speak whale”), while a trio of sea lions provide some great comic relief, as they obsess over sleeping on a rock. The main new addition, however, is an octopus named Hank (Ed O’Neill), whose bitter and curmudgeonly nature make him a perfect new foil for Dory, as Marlin’s role in the film is reduced.

As you might expect from a Pixar film, Finding Dory is beautifully animated. The characters and environments are all wonderfully constructed, with the ocean segments capturing a similar realism to that of the first film, while the events of the marine life institute give a whole new visual life to the franchise. Hank alone is one of the most detailed animated characters in recent memory, as his squishyness and tentacles give him unique movements, and his ability to camouflage providing some great visual gags.

Finding Dory also boasts an almost-surprisingly terrific musical score. Finding Nemo similarly had a beautiful soundtrack, but what stands out about Finding Dory’s score is how rarely it falls back on old tunes, instead building an identity of its own with its music, which is no less beautiful than it was in the first film. 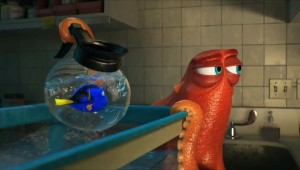 Some may lament that many characters from the Finding Nemo – such as the sharks – are absent, but in the end it works for the best. Finding Dory manages to tell a story of its own instead of simply pandering to our memories of the original, as so many sequels do.

Finding Dory has a heart, and a lot of it, which is certainly more than you can say for most sequels. It not only builds on its leading character beautifully, but it also has something of its own to say. While Finding Nemo was all about a parent’s love and devotion to his son, Finding Dory is a story bout living with, and dealing with, disability. This makes Dory thematically unique to Nemo, and furthers Pixar’s ability to tell a wide range of stories.

Perhaps Finding Dory’s greatest accomplishment, however, is how it takes such little details from its predecessor and turns them into not only a compelling and worthwhile sequel, but one of the best sequels in recent memory. It takes a number of cues from its predecessor, but its best bits are those that are its own, or the small things from the original that it turns into something more. This speaks truest for its heroine herself. Dory was always the most remembered character from Finding Nemo, but with the newfound depth this sequel gives her, she’s downright unforgettable. 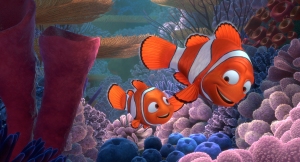 It wouldn’t be the slightest bit of a stretch to call Finding Nemo a modern classic. When it was released in 2003, Finding Nemo became a worldwide cultural phenomenon. For a time, it was the highest-grossing animated film in the world, and I think it’s safe to say it was probably the most popular animated film ever released up until Frozen hit theaters over a decade later. Pixar had made a name for themselves with the Toy Story films, Monsters, Inc. and A Bug’s Life beforehand, but Finding Nemo was the film that put them at the top of the mountain of animated films, where they have more or less remained ever since. The success of Finding Nemo certainly isn’t undeserved, as it remains an absolutely charming and heartfelt feature.

Finding Nemo tells the story of Marlin the clownfish (Albert Brooks), and his son Nemo (Alexader Gould). The film opens in tragedy. Marlin and his wife Coral are expecting parents, with hundreds of eggs ready to hatch, when a barracuda emerges and knocks Marlin unconscious. When he awakes, Marlin discovers his wife is gone, along with all but one of their eggs. He names the remaining child Nemo, and promises to never let anything happen to him.

It’s quite a shocking opener, to be honest, but an effective one, as it immediately sets the tone for the film in motion, as well as making Marlin an appropriately sympathetic hero. Disney films often feature overprotective parents, but rarely show audiences their perspective of things. What director Andrew Stanton did here was give Marlin an entirely justifiable means for both the character’s motivations and his flaws. You can’t help but feel for Marlin, even during the times when he’s in the wrong.

The main plot kicks in a few years later, as Nemo is preparing for his first day of school. An argument with Marlin upsets Nemo, who tries to spite his father by doing something reckless, which ends with the young clownfish getting nabbed by a scuba diver and taken away. Marlin panics and gives chase, but quickly loses sight of his son onboard the speeding boat. 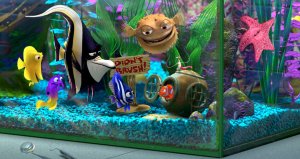 Marlin then makes it his mission to find his son and fulfill his promise, even if it takes him across the entire ocean. Marlin ends up being accompanied on his adventure by Dory (Ellen DeGeneres), a regal blue tang who suffers from a severe case of short-term memory loss, and one of Pixar’s greatest creations. Meanwhile, Nemo ends up in the fish tank of a dentist’s office in Australia, where he teams up with a gang of aquatic misfits – lead by a moorish idol named Gill (Willen Dafoe) – to hatch an escape plan. 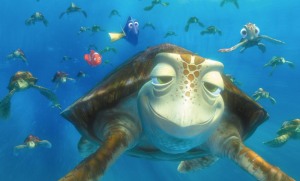 The story is filled to the brim with heart and humor, with some of Pixar’s best writing up to that point. Just about every character, from the main heroes to those with smaller roles whom Marlin comes across on his journey (including a surfer dude sea turtle named Crush, voiced by director Andrew Stanton himself), leaves a lasting impression.

Another highlight of the film is the animation itself. Water-based stories and animation have a history of going together like peanut butter and jelly, and Finding Nemo remains sound proof that it’s a combination made in heaven. The imagery still looks stunning, and each character shows the effort and dedication that went into giving all of these aquatic animals personalities. It’s a beautiful film to look at from the first frame to the last.

On the musical side of things, Finding Nemo also boasts one of Pixar’s best soundtracks, with musical themes that beautifully capture the serenity and ambiance of the ocean, along with more – *ahem* – bubbly tracks to go with them. 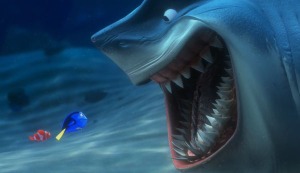 To put it simply, Finding Nemo is simply a great movie for audiences of any age. It’s cute, fun and relatable to children, while also being equally so for the adult crowd. Much like Monsters, Inc., the only real downside may be that Pixar has since bettered it. Pixar followed up Nemo with the strikingly sophisticated The Incredibles a little over a year later, and director Andrew Stanton would eventually create Wall-E, which would use a similar sophistication to magnify the feelings Nemo started. But if simply falling a little short of some of its creators’ other works is its only real drawback, then Finding Nemo has certainly done well for itself. It holds up – *ahem* – swimmingly.

If you’re looking for a great film to bring a smile to your face, and perhaps a tear or two to your eyes, you can never go wrong with Finding Nemo, no matter your age, and no matter how many times you’ve seen it.