These days, we kind of take for granted the Mario games that don’t fit into the “main” Super Mario series. Unless it’s the next big 3D Mario adventure, we tend to refer to the games as “spin-offs” and don’t hold them in the same light as the “proper” Mario games.

The thing is, Mario was always Nintendo’s renaissance man. Shigeru Miyamoto designed the character with the intent that he could be thrown into any type of game, in a similar vein to classic cartoon characters like Mickey Mouse, Bugs Bunny and (most specifically) Popeye the Sailor Man. It’s not as though Mario was created with a definitive story and some big universe of characters already planned out ahead of time. Mario appeared in a number of games before Princess Peach, Bowser and the entire Mushroom Kingdom came into existence in Super Mario Bros. That was Mario’s breakout role, sure, but it wasn’t exactly where he got his start. Although it makes sense that Super Mario Bros. would become the basis of what we all consider to be “main” Mario games, as time has gone on it seems people have diminished the allure of the “other” Mario games as an unfortunate side effect of this.

That wasn’t the case back in 1990, when Mario could suddenly don a lab coat and head mirror, call himself a doctor, and star in a falling block puzzle game, and it would still create an iconic game in its own right.

Dr. Mario was the first such puzzle game in the Mario franchise, which would slowly become its own series, and open the door for puzzle games starring other Mario franchise characters like Yoshi’s Cookie and Wario’s Woods. While some of these later puzzle games were improvements, and subsequent Dr. Mario sequels (such as the underrated Nintendo 64 entry) built on the formula, the original NES release is still a charming and addictive puzzle game.

The goal of Dr. Mario is to eliminate a screen of all of its viruses. These viruses come in three colors: red, blue and yellow. You eliminate these viruses by matching them up with vitamins of corresponding colors. But there are a few twists to keep things interesting.

The first thing to note is that the vitamins have two halves, which can be different colors, so you’ll want to pay extra attention when the viruses are close together. You have to match four objects of the same color in order to eliminate a virus. Each half of a vitamin counts as one object, and a virus counts as another. So you could potentially have three viruses of the same color stacked on top of each other, meaning you’d only have to put one similarly colored half of a vitamin on top of them to eliminate them. You can even eliminate the viruses by placing the vitamins against them horizontally, but it’s much less common.

Additionally, if the vitamins involved in an elimination feature halves of different colors, those halves will remain and fall straight down until they either land on a virus or the bottom of the screen. This gives you an added level of strategy for any nearby viruses, but it also risks filling up the screen with piles of vitamins. If the vitamins stack up to the top of the screen and Mario can’t throw any more, you lose the round.

It’s a nice twist on the Tetris formula, one that remains fun even today. Better still, the game features a two-player competitive mode, where each player aims to eliminate their screen of viruses before the other. And despite the technical limitations of the game (even by NES standards) it makes the best with what it has. The graphics are cute and fun (I especially like how part of the screen is a microscope held up to the viruses, just so you can see them dancing around in all their glory), and the game’s two selectable music tracks, Chill and Fever, are infectiously catchy, and are all too easy to listen to on repeat as you play round after round.

Unfortunately, if you don’t have a second player at the ready to tackle the aforementioned two-player mode, Dr. Mario’s gameplay can only go so far. The lack of any additional modes really stands out in retrospect, and the fact that – unlike Tetris – each round has a set goal to reach means beating your own high score is kind of an afterthought.

Dr. Mario is still fun, no doubt. But it isn’t particularly deep. It’s at its best when two players are onboard, and even in that area it’s been bettered (Dr. Mario 64 turned the formula into a four-player party game. And now I really wish Nintendo would re-release that game or make a proper sequel to further add to the proceedings).

Its limitations are certainly more apparent today, but Dr. Mario is still worth playing. Perhaps more importantly, it represents a time when gamers were a bit wiser, and could accept Mario in any role and not question the merit in its potential. 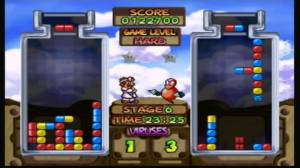 Dr. Mario was one of Mario’s earlier forays in branching out to genres outside of the platformer, and remains a fun and addictive puzzle game to this day. In 2001, as the Nintendo 64 was coming to a close and the GameCube was readying its way to store shelves, Nintendo released a relatively obscure entry in the Dr. Mario series as part of the Nintendo 64’s last breath titled (what else?) Dr. Mario 64. Though Dr. Mario 64 retains the fun of the series, its lack of newness to the formula may mean you’ll only break it out during parties.

Dr. Mario 64 retains the gameplay of the series: It works like a falling-block game, but instead of blocks, it’s vitamins (or “megavitamins,” as the series calls them). The vitamins are separated in two halves, with either side being red, blue or yellow. Additionally, there are several red, blue and yellow viruses on the game board. Like most falling-block games, the goal is to prevent the vitamins from stacking to the top of the screen by connecting a row of similarly colored vitamins, though unlike other such puzzle games, you don’t simply survive for as long as possible, but you can actually win by by eliminating all the viruses on your board before your opponent.

It remains a simple setup, but the gameplay is incredibly addicting. Dr. Mario 64 even adds a story mode to the equation – which can be surprisingly difficult – where players can play as either Dr. Mario or Wario and take on a series of enemies from Wario Land 3, which is a pretty strange crossover, the more I think about it (other than Wario himself, no other characters from the Wario games usually crossover into the Mario series in the way the Donkey Kong or Yoshi characters do).

The appeal of the story mode is short-lived, however. The real reason you’ll be coming back to Dr. Mario 64 is for the multiplayer, as this entry allows for up to four players to join in the mayhem. This is where the game really shows its appeal, because other than the added number of players, Dr. Mario 64 really doesn’t add any particularly appealing new modes into the mix (one of the additional modes changes things into the aforementioned “play until you lose” method of the puzzle games of old).

On the bright side of things, four-player Dr. Mario is the kind of thing that’s tailor-made for get-togethers with friends. The Dr. Mario gameplay is a whole lot of fun, and playing it with a full-party just makes it all the more entertaining.  It’s a shame that the game’s release towards the end of the N64’s life meant that not a whole lot of people got to experience Dr. Mario 64’s multiplayer madness.

Dr. Mario 64 has some appealing visuals for what it has to offer, with the character animations being colorful and vivid, and reminiscent of the anime-style puzzle games I used to play in arcades back in the day. Even more notable is the soundtrack. The music tracks are upbeat and energetic, and really add to the frantic gameplay (the final boss in the game’s story mode has a theme that sounds like something out of Secret of Mana).

Overall, Dr. Mario 64 may not go down as a classic by any means, but it remains a really fun game to break out for some multiplayer fun. It may be the same old Dr. Mario in a lot of ways, but when you consider that it’s Dr. Mario for four players, it’s hard not to appreciate it.