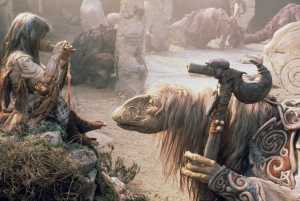 Jim’s Henson’s 1982 feature film, The Dark Crystal, was quite different from the beloved entertainer’s other creations. Though The Dark Crystal features a cast entirely comprised of puppets, costumes and animatronics, the film is notably darker in tone than what you would usually expect from the creator of the Muppets. Boasting a heavy dose of fantasy world-building and a genuinely imaginative mythology, The Dark Crystal can be wondrous to behold, and the film has gained a strong cult following in the decades since its release.

It’s a shame then, that the movie isn’t particularly good.

It’s an unpopular opinion to dare besmirch pretty much anything that has the name Jim Henson attached, but for all its imagination and visual splendor, The Dark Crystal has little to nothing to speak of in regards to character depth, with its main character in particular being arguably the most boring hero in any fantasy film.

Set in the world of Thra, the plot of The Dark Crystal takes place one-thousand years after a planet-altering event. The “Crystal of Truth” – a magic crystal of unspeakable power – was cracked, an event that brought forth two new races to the world of Thra. One of these races were the urRu (referred to in the film simply as “Mystics”), kind-hearted, sagely, four-armed beings which bear a passing resemblance to a combination of camels and turtles. The other race spawned from the Crystal cracking were the Skeksis, malevolent creatures which look like a humanoid cross of birds and lizards.

There is a sliver of hope for Thra, however, as one of the planet’s natural races – the elf-like Gelflings – have prophesied that one of their own will reunite the lost shard of the Dark Crystal to its rightful place, and bring an end to the Skeksis’ rule. Fearing this prophesy, the Skeksis sought to eradicate the Gelflings, wiping out all but (unbeknownst to the Skeksis) two of them.

One of these Gelflings is Jen (voiced by Stephen Garlick), who was taken in by the “wisest Mystic” after he was orphaned. The wisest Mystic believes Jen to be the Gelfling of prophesy, and is preparing the boy for the day he must set out on his journey to save Thra. But that day is fast-approaching, as the Crystal must be restored before the “Great Conjunction,” an event that occurs once every thousand years in which three suns are aligned and bring out the Crystal’s full power in a kind of planet-wide reset. If Jen fails to restore the Crystal in time, the Skeksis can use its power during the Great Conjunction to ensure they rule Thra forever.

That may be a lot of explanation, but on the bright side of things, the mythology of it all is incredibly imaginative, so the exposition remains interesting. Though The Dark Crystal ultimately stumbles as a film because it fails to make any of its characters as memorable as its mythology and the visuals used to bring it to life. The film even fails to properly communicate certain elements of its plot.

A prominent example of the latter issue is that the wisest Mystic sends Jen on the quest for the Crystal shard on his death bed, at the same time as the Skeksis emperor is dying. During the film, this comes off as a glaring plot hole. After all, the Skeksis use the Crystal’s power for immortality, which extends the life of their counterpart Mystics as well, so how could a member of either race be dying of old age?

It turns out there’s an explanation, though it was only brought up in the film’s novelization and other such “expanded reading” materials of the franchise. With the Great Conjunction drawing near, the wisest Mystic – knowing he shared his life-link with the Skeksis emperor – found a way to magically “will himself to death” in order to bring about the Emperor’s demise as well. The Mystic did this because the Skeksis Emperor had grown so great in power that his death was necessary to give Jen a fighting chance (way to believe in your hero).

It’s not the best explanation, but maybe it would seem a bit less flimsy if it were actually brought up in the movie!

Still, this scene in question does bring out one of The Dark Crystal’s few resonating moments. We get a clever contrast in the deaths of the two leaders: The wisest Mystic has a humble passing, vanishing into sparkling dust with only Jen present. Meanwhile, the Skeksis Emperor – defiantly clutching onto his power until he breaths his last breath – crumbles into dirt on his garishly-decorated deathbed as his subordinates anxiously wait for him to die, so they can decide which of them claims the throne.

Sadly, such moments truly are a rarity in The Dark Crystal, especially since Jen is as empty of a main character as the filmmakers could have concocted. I am dead serious when I say that Jen has no discernible character traits. He has no personality whatsoever. He’s just a blank figure wandering around the plot. Jen is so poorly thought out that when we actually get some moments alone with the character that could potentially give him some time to develop, all he does is blatantly ask stupid questions like “What is this shard for?” and “What do I do with it? Am I supposed to take it somewhere?” Thanks for reiterating the plot basics, Captain Obvious!

Another problem with Jen – and perhaps this is a petty complaint – is that he is the single ugliest creature in the film. The other living Gelfling, a female named Kira (voiced by Lisa Maxwell), serves as the film’s deuteragonist, and is only marginally less creepy. In a film filled with so many wondrous creatures, it’s baffling how the main characters ended up being the most unappealing, unintentionally frightening creatures in the film.

Nightmares induced by the Gelflings aside, The Dark Crystal is a visual treat, possibly one of the best special effects films from a purely visual standpoint. The puppets and costumes are on-par with those of Star Wars, and they still impress all these years later. The Skeksis, in particular, should rank highly on any list of the best practical effects in movie history.

It’s actually pretty tragic, that The Dark Crystal stumbles so drastically on the narrative front. If its characters were half as memorable as its visuals and mythology, it would be a real classic of fantasy cinema. Unfortunately, none of the characters seem to exist outside of where the plot needs them, with the only semblance of personalities being found – once again – in the character designs for the Skeksis. Unfortunately, the only Skeksis who gets a decent amount of screen time happens to be the Chamberlain, whose constant, high-pitched “Hmmmms” might get on some viewers’ nerves (though I personally find them hilarious). Other than what you can make out of the Skeksis’ personalities through their designs, however, The Dark Crystal has nothing to speak of in terms of characters.

Perhaps The Dark Crystal would have been a better film if its narrative were told from the perspective of the Skeksis, despite their role as antagonists. As loathsome of creatures as they are, the Skeksis are fascinating to watch, infinitely more so than the boring and charmless Gelflings. That’s for damn sure.

The Dark Crystal exists in a weird place for me, one that’s inhabited by a very small handful of films. That is to say, it’s one of the few films that I simultaneously like and don’t like. It’s rich in imagination and visual splendor, making it recommended for fans of practical effects and fantasy lore. But if you’re viewing it as a movie (which, you know, it is), it leaves a lot to be desired.

As of this writing, Netflix will soon release a prequel series to The Dark Crystal. Here’s hoping that said series finally brings out a story and characters worthy of the imagination Jim Henson littered Thra with.