*Review based on the PC version*

Hyper Light Drifter was one of the more notable indie releases of 2016, not only for its often-delayed production, but also for its personal aspects, with its story reflecting developer Alex Preston’s heart disease. Though Hyper Light Drifter ultimately suffers from a few gameplay quirks, it is nonetheless a unique gaming experience that provides players with a captivating world.

Alex Preston has described Hyper Light Drifter as a combination of The Legend of Zelda: A Link to the Past and Blizzard’s Diablo. It’s actually a pretty apt comparison, as Hyper Light Drifter combines the top-down nature of a 2D Zelda and squeezes in some Diablo-style hack n’ slash combat.

Players take control of “The Drifter,” a caped warrior who is suffering from an unknown illness. The Drifter inhabits a mysterious world that very much echoes Hayao Miyazaki’s Nausicaa of the Valley of the Wind in its atmosphere and creature designs (many dormant giants can be found in the backgrounds, and bear a striking resemblance to the God Warriors of Nausicaa). The Drifter is equipped with an energy sword, and can find other weapons along his journey across this vast world. The Drifter also possesses an ever-important dash move, which is necessary to get across chasms and other dangerous areas.

The Journey will take the Drifter across the four corners of this mysterious realm (the player can decide which area to conquer in whatever order). Hordes of monsters and massive bosses stand in the Drifter’s way, and strange relics and batteries can be uncovered to give the Drifter access to new weapons and abilities. 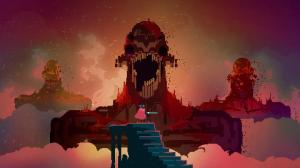 It’s a simple enough setup, with the actual plot involved purposefully being minimalistic (there’s no dialogue text, only images appearing in bubbles above characters’ heads). But the atmosphere and insanely detailed retro visuals draw you into the game’s world. Complimenting the visuals is an equally atmospheric, ambient score, which helps evoke the game’s aura of mystery.

On the downside of things, not all of the gameplay works as well as you may like. For one thing, dashing across some areas can prove cumbersome, as the (admittedly beautiful) retro visuals often make it difficult to discern the game’s perspectives, leading you to plummet to an accidental death more often than you’d like to admit.

It should also be noted that Hyper Light Drifter is a rather difficult game. In itself, that isn’t a problem. But an issue arrises with the game’s rather stingy nature in giving the player extra health. The Drifter can find small health packs, which are collected and stored, only to be used when the player hits a particular button. But these health packs are a lot rarer than they should be in a game that’s already pretty difficult (even Dark Souls gives plenty of opportunities to refill your Estus Flask). What’s worse is that the Drifter will respawn with however much health he had at the last checkpoint, but whatever health packs he used will still be used up. In areas that contain swarms of enemies, this can get downright aggravating.

One final notable drawback is that playing the game with a mouse and keyboard never feels right. Even with the ability to map the Drifter’s different functions to different keys, it just never meshes with how the Drifter plays. Thankfully, you can still plug in a PS4 controller to make the game play a lot more like it should. But those who stick solely to PC gaming who wouldn’t have a current-gen controller at the ready probably won’t have the best impression of the game.

That’s a crying shame, because when Hyper Light Drifter works, it’s a good deal of fun to play, and the experience evokes some strong emotions and intrigue. The game’s sense of minimalism, extravagant pixel art and simple but fun combat make for a memorable experience.

Though the game’s hiccups do prevent it from reaching the heights it may have otherwise reached, Hyper Light Drifter is still a standout in the indie gaming scene. It’s worth playing for the imagination of its world alone.