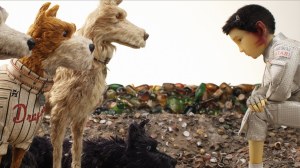 Wes Anderson has grown into one of the more prominent film directors of the 21st century. The quirky, off-beat humor of Wes Anderson’s films have given them a style of their own. Though some find Anderson’s style unnatural (the characters of his film’s often seem to know they’re movie characters), even the director’s biggest detractors seemed won over by his debut animated feature, 2009’s The Fantastic Mr. Fox. Now, nearly a decade later, Anderson has followed up his witty animation debut with Isle of Dogs, a feature whose sharp visuals are matched by its originality.

Isle of dogs is set in a somewhat dystopian near future. In Japan, the country’s dogs have become inflicted with “dog-flu” and “snout fever,” which could potentially spread to humans. In the city of Megasaki, the conniving mayor Kobayashi decrees that every dog in the city be banished to Trash Island, despite claims from Prof. Watanabe that a cure for dog-flu is nearly complete. The first dog to be transferred to Trash Island is Spots, the guard dog of mayor Kobayashi’s orphaned ward, Atari (Koyu Rankin).

Six months later, Atari manages to pilot a small plane to Trash Island, desperate to find his dog. Unfortunately for Atari, his plane crashes on the island, lodging a piece of propeller into his head. Luckily, a gang of ragtag dogs – comprised of Chief (Bryan Cranston), Duke (Jeff Goldblum), Rex (Edward Norton), King (Bob Balaban) and Boss (Bill Murray) – find and resuscitate the boy, then proceed to join him on his quest to find Spots.

The plot is at once simple yet wildly original. The setup of a boy looking for his dog is certainly among the easiest to sympathize with, but the idea to set the adventure on a trash-covered wasteland is novel, as is the fact that most of the human dialogue is in Japanese (with only a few moments featuring translation) while all the dogs speak English.

It’s that offbeat originality, as well as the film’s deadpan humor and richly detailed animation that make Isle of Dogs one of 2018’s more standout features. This is an undeniably charming film, but perhaps not in the traditional sense of the word ‘charming.’ It may sound a little bit like a downer in concept, what with an entire city’s worth of abandoned dogs fending for themselves in a dystopian junkyard (early in the film, one dog bites off the ear of another in a scrap over some food), but Isle of Dogs is littered with characters whose humor and wit wins us over, and its story has an almost surprising amount of heart, without ever really feeling like it’s trying to wring tears from the audience’s eyes.

That’s before we even get to mentioning the fun little quirks that compliment the film’s personality. For example, it seems like Atari often understands what the dogs are saying, despite the fact that they speak different languages and are of different species. Little things like this, which gleefully avoid explanation when a simpler movie might feel the need to spoon-feed one to its audience, make Isle of Dogs one of those movies that wins you over for its sheer insistence to play by its own rules.

Stop-motion animation is often noted for the sheer arduousness of the process, to the point that even a few moments of it is considered a hefty feat. But Isle of Dogs – like Fantastic Mr. Fox before it – is one of those stop-motion treats where it comes to life seemingly effortlessly. It’s true that stop-motion can’t make things look as ‘perfect’ as CG animation, but that’s part of what plays into its charm. While computer animation is also a taxing accomplishment, the finished product can often disguise the hard work that went into it. But with stop-motion, the craftsmanship – blemishes and all – is on full display, leaving next to nothing to be taken for granted. Laika may get most credit these days for coming the closest to giving stop-motion the same smoothness as CG or hand-drawn animation, but Wes Anderson’s style may be among the most enjoyable to look at. Anderson’s stop-motion features often bask in duller hues and less fantastic character designs than most animated films, but they have an earthly charm to them, and they leave the personalities of the story and characters to provide all the color they need.

Time will tell how well Isle of Dogs stacks up to Fantastic Mr. Fox (if you ask me right now, I don’t think it’s quite as good), but it does follow the same winning formula…which in this case means going against many formulas and just being itself. Isle of Dogs is a funny and strangely heartwarming film that will probably leave you with a big, goofy grin on your face, and an even stronger appreciation for your pets.