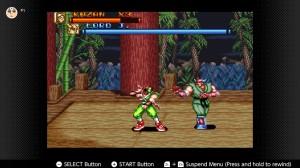 Brawl Brothers, released on the SNES in 1993 by Jaleco, is a side scrolling beat-em-up game, and the second installment in the Rushing Beat series. Curiously, it’s noted as being the only SNES game to feature both its western and Japanese releases on the same cartridge (the Japanese version being accessible via a cheat code). Other than that little piece of trivia, however, Brawl Brothers doesn’t provide a whole lot to write home about.

Let’s get one thing straight, I really like beat-em-up games. Their simple, straightforward, arcade-style gameplay makes them among the purest “video game-y” of video game genres, alongside the likes of platformers and puzzle games (albeit beat-em-ups don’t have the same depth of those genres). Walking from one side of the screen to the next, punching bad guys to a pulp along the way, is so simple and satisfying, particularly when multiple players are involved. But if not done right, beat-em-ups risk falling into monotony. Unfortunately, Brawl Brothers is one such beat-em-up.

The main issue with the game is that the hit detection feels way off. You repeatedly mash the attack button on an enemy, hoping that you’re aligned at just the right pixel to land your punches. You just walk into enemies to grab them for throwing attacks, but sometimes the enemies grab you instead, an issue that could have been easily avoided if you used a separate button to grab enemies instead of walking into them.

While Brawl Brothers provides a versatile (for the time) roster of five characters, each with their own special moves, another major issue with the game is that using these special moves drains your health bar. I’m guessing this was done to prevent players from constantly spamming the special moves, but surely there was a better way to go about that? Why not build up a separate meter with the more hits you land on enemies or how many of them you defeat, and once said meter is full, you can use your special move? That sounds like a better option than draining a huge chunk of your own health amidst an onslaught of enemies to prevent them from…draining a huge chunk of your health.

Perhaps the most aggravating issue with Brawl Brothers, however, are the maze levels. This is first present in the game’s sewer stage, with the player potentially cycling through the same screens non-stop unless they know which doors to take on which screen. The big problems is the game gives no indicator this is the case, so naturally, I followed the rules up until that point, going to the end of the stage expecting to move on, only to start doing the same thing over and over again. I had to look online to figure out what I was doing wrong, only to find out about the maze element. If you know the pattern, it’s not too difficult. But if the game is going to abruptly change the rules on the player, it would be nice if there were some kind of hint about that happening. Again, even if the answer isn’t too cryptic, having to learn that answer via the web for a game released in 1993 is kind of annoying.

Believe it or not, but the Japanese version of the game doesn’t include the maze elements, with those stages still following the more straightforward approach. Why the western release decided throwing in cryptic maze-like stages into the mix without any indication of such was a good idea, I’ll never know. Thankfully, as previously mentioned, the Japanese version is readily available on the western cartridge (and that’s still true for the Nintendo Switch release). Repeatedly pressing B, A, X and Y (in that order) on the ‘Jaleco’ screen will appear to glitch things up, indicating you can now enter codes. From the glitchy screen press start, hit down three times, and press start again, and you’ll be in the options menu for the Japanese version of the game. Simply continue from there and voila!

Look at me, giving away a cheat code in a review. But this is a rare exception, because the lack of the maze stages makes the Japanese version of the game so much better. Granted, the hit detection is still off, and the special moves still drain health, but at least it fixes one of Brawl Brothers’s most glaring issues. Plus, one of the characters can hit enemies in the groin in the Japanese version!

Other than that, there’s really not much difference between versions, but the removal of mazes alone makes the Japanese version the preferred method of play.

Still, even with the marginal improvements of the Japanese version of the game, Brawl Brothers still feels like one of the more dated beat-em-ups. The graphics are great (that’s Super Nintendo for you), and the music is catchy. And fans of the genre might still have a fun enough time. But no doubt there are plenty of other, better beat-em-up options out there.

Originally developed by Jaleco for arcades in 1991, Earth Defense Force made its way to the Super Nintendo Entertainment System the very next year, with the appropriate “Super” added to the title. Super Earth Defense Force is a simple side scrolling rail-shooter that provides competent enough fun, but features some questionable creative decisions that hold it back.

The player takes control of a space fighter, which is accompanied by two satellite fighters. At the start of each stage, players can select which weapons the satellite fighters have, with eight possible options. But you should always pick the “homing” option.

This is the game’s first big creative misstep. The homing attack is so overpowered and so much more useful than the other seven options that it makes them close to pointless. I’m not talking about the good kind of overpowered which simply makes the character feel more powerful, like the cape in Super Mario World or the Crissaegrim from Symphony of the Night. This is the bad kind of overpowered, as in “did anyone test this to properly compare these weapons?” Though the game sees the player automatically traveling to the right side of the screen, enemies don’t just spawn ahead of, but behind, above, and below as well. As such, the homing attack is the only one that can reliably hit these enemies. And in some instances (even on the first level), there are numerous enemies descending from the top of the screen that are difficult to avoid unless you destroy some of them, but you can’t hit them unless you – as you might have guessed – picked the homing attack. There’s no reason for you not to pick it. 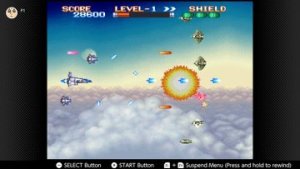 The player has three hit points, and four total lives. The only way to heal is by completing a stage, and there is no way to gain extra lives. Additionally, the stages feature no checkpoints, so every defeat will send you back to the start of the current stage. This all makes sense for an arcade game, where no doubt additional coins would allow for more continues. But it’s a shame that Earth Defense Force’s transition to the Super NES didn’t consider the differences in arcade and console gaming. With no way to heal or continue past your four initial lives, it makes the game an entirely trial and error approach. You’ll make more and more progress every time you play and figure out which enemies spawn at which point, but only after learning from being defeated by surprise attacks time and again. That might make sense for an arcade game, but on the SNES, the occasional healing item or extra life would be appreciated.

In the case of extra lives, Super Earth Defense Force even provides an apt opportunity for such things. As you defeat enemies, you’ll gain experience points. Once your experience bar fills up completely, you’ll gain a level, which will upgrade your weapons (preferably your homing weapons). On the plus side, you’ll keep your accumulated level and experience points even after you lose a life. On the downside, this would have been a primed opportunity to also give the player an extra life, giving them more time to utilize and appreciate their upgraded weapons.

As it is, the game’s trial and error approach will see you gradually gain a level, die, then make more progress through the current stage with your upgraded weapons. With only four chances to make it through the whole game, the experience becomes little more than a memorization game. 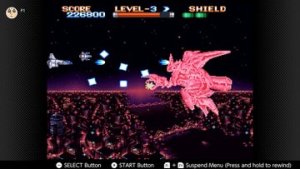