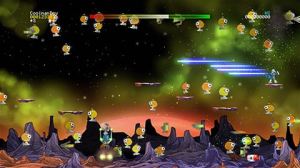 Jetpac Refuelled saw Rare revisiting their very first game in 2007 on the Xbox 360. Though the graphics were updated and the game now featured a catchy soundtrack, Rare really aimed for authenticity when it came to Jetpac Refuelled, going so far as to feature their original moniker of “Ultimate Play the Game” on the game’s opening screen.

The core gameplay remains the same to the 1983 original, with players taking control of the astronaut Jetman as he battles hordes of aliens to rebuild his spaceship. The first level features Jetman trying to claim the different parts of his ship before gathering fuel, with most subsequent stages only featuring the fuel-gathering aspect (though every now and again you’ll have to build a new ship). You still fly using a jetpack (this time by pressing the shoulder buttons), and you still shoot lasers at the bad guys. Just like the original, the stages are single-screens and allow the player, their lasers, and enemies to travel from one side of the screen to the other, Super Mario Bros. 2 style, which will surely come in handy when needing to strategize on the fly when the screen becomes overrun with enemies.

So what’s changed this time around? As stated, the game features HD visuals and a brand new soundtrack, but there are also some tweaks to the gameplay itself. You can now upgrade your laser by picking up power-ups (the starting laser shoots horizontally, the first upgrade shoots both horizontally and vertically, the second upgrade spreads in multiple directions in front of Jetman, and subsequent upgrades provide more powerful versions of those three). You can also pick up bombs that clean the screen of most enemies. There are new enemies that behave differently than the existing ones, there’s a competitive multiplayer mode, and the game now features a whomping 128 stages.

Essentially, this is Jetpac on steroids.

The good news is that the core gameplay of Jetpac was already fun, and the smoother controls and weapon upgrades provided in this remake make it all the more enjoyable. On the downside of things, by extending the game so much, you may find that things become a bit repetitive over time, and perhaps some new modes of play would have been more desirable than the massive number of similar stages.

Another drawback is that that your weapon upgrades are lost not only when you die (which makes sense), but also when you complete a stage. I can appreciate that Rare tried to make sure the player wasn’t overpowered when entering a new stage, but the difficulty stacks up pretty quickly, so you could really use the extra help, instead of being sent back to square one after successfully completing a level. At the very least, they could have simply set the weapon back to the starting point of whatever power level they were when they completed a stage (so you might start back from the beginning of the second versions of the lasers, if you managed to reach that point). Just a suggestion.

Even with these complaints, Jetpac Refuelled does provide a good deal of fun. Though the simplicity of the gameplay may be better suited for fewer levels and a variety of modes that put a new spin on the mechanics, because I feel only the truly dedicated will even bother to see its 128th level. Jetpac Refuelled is a fun remake of a classic game that features a new coat of paint, but perhaps its simplicity was always better suited for small doses, and could have been expanded through less literal means.

*Review based on Jetpac’s release as part of Rare Replay* 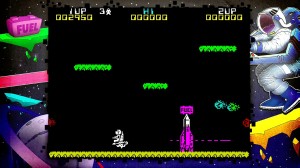 1983’s Jetpac is well known for being the first-ever video game by British developer Rare, then known as Ultimate Play the Game (gee, I can’t imagine why they changed that name). Though its utter simplicity means time has exposed something of a shallowness to its experience, Jetpac still retains enough old school fun to make it worth a look for those with a fondness for retro gaming.

Jetpac really is as simple as they come: Stages are single-screen affairs (as was the norm at the time), and your character is an astronaut who can fly through the air (via his jetpack, of course), and can shoot baddies with a laser gun that can only fire forward. The goal of the first stage is to grab the missing pieces of the astronaut’s rocket, and return them to the ship, and then to gather enough fuel to take the rocket to the next stage (the fuel boxes are purple, and the more fuel the rocket gets, the more purple it becomes). Subsequent stages ditch the first segment and go right to the fuel collecting, with enemies trying to stop you at every turn. All the while, random collectibles fall from the sky, and can be gathered for extra points.

Again, it’s all very simple stuff, but you’d be surprised how addicting the game can be, and you may find yourself wanting to restart as soon as you get an unfortunate game over.

There is a fun element of strategy to this simple gameplay though, as the enemies of different stages behave differently. The first stage’s enemies resemble fireballs, and simply fly straight, while the enemies of the second stage (which resemble the old Fry Kids characters from McDonald’s) zigzag around the place. Additionally, the levels have something of a Super Mario Bros. 2 quality in that if you walk into one side of the screen, you’ll appear on the other side. This also applies to the enemies and your lasers. Combine these elements with the fact that your character dies in one hit (though you start with five lives), and you’ll be strategizing different ways to navigate past enemies, grab the items, and complete the rocket as fast as you can.

There’s really not much more to it than that. The graphics are as simple as you’d expect from 1983, though there is an attempt to liven things up by the enemy sprites appearing in a variety of colors (which, from what I can tell, doesn’t alter their behaviors). Unfortunately, there is no music to speak of, which is a shame, considering how catchy video game music could be even back in the day.

Whether or not one enjoys Jetpac depends entirely on how much they appreciate gaming’s early years. What Jetpac lacks in depth, it makes up for in a surprising level of addictiveness. If you’re simply looking for some good old-fashioned, arcade-style gameplay, you could certainly do a lot worse.