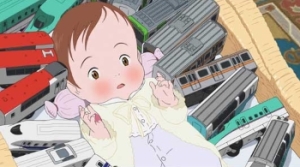 Mirai, the latest animated feature from Mamoru Hosoda, is one of those movies that combines the simple joys of life with the fantastic and surreal. While Hosoda’s last film, The Boy and the Beast, was a delight in its own right, its later half seemed to fluctuate with what kind of story it wanted to tell, with its wonderful monster world being largely forgotten for a lengthy stretch of time, and a final battle that felt like it was from another movie. By comparison, Mirai feels a lot more focused and consistently true to itself. And while Mirai may suffer from an occasional slump in pacing, it ultimately provides one of the most charming anime films in years, and one of the best films of 2018. 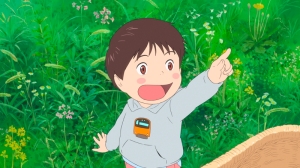 Mirai tells the simple but timeless story of a young boy growing jealous of all the love and attention his new baby sister receives from his parents. The boy is Kun, a rosy-cheeked child who loves to play with his dog Yukko and has a strong interest in bullet trains, with toy models of them strewn about his room. His newborn sister is Mirai who, like all newborns, understandably starts taking more and more of their parents’ attention. Of course Kun, being a young boy, doesn’t quite understand the situation, and only knows that he’s getting less attention from his parents.

This, of course, means that Mirai is a story about Kun becoming a more responsible and loving big brother. As stated, it’s a tried-and-true, though timeless, storyline. But Mirai is able to make a unique identity for itself by the ways it tells its story. 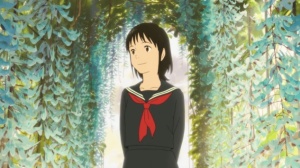 The film does a fantastic job at telling its story through a child’s perspective. For example, the only named characters are Fun, Mirai and their dog Yukko. The parents are only ever referred to as ‘Mom and Dad,’ even in the end credits. And the remaining characters consist of Grandma and Great Grandpa. Mirai puts audiences firmly in the children’s viewpoint, which really adds to how the film turns rather simple, mundane events into something fantastic.

Mirai features a number of fantasy elements, which may be real or simply creations of Kun’s imagination. The most notable being that Kun meets up with an older Mirai from the future, who needs Kun’s help in a few different instances, as she can’t directly affect moments from her past. Fun also meets a human version of Yukko, a child version of his mother, and his recently deceased great-grandfather during his younger days. As stated, whether these elements are literal or allegorical is up for interpretation, but they do all have a common thread. 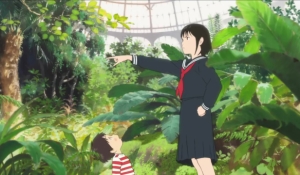 The house in which Kun and his family live is as much a character as any of the humans (or the dog) in the film. Built by Kun’s now stay-at-home architect father, the house of the film – much like the house in anime classic My Neighbor Totoro – is one of those places from the movies that really stands out, and you’ll vividly remember. A doorway leads to a stairway leads to a garden leads to the house which, in itself, is a series of small rooms on top of each other like a staircase. But it’s whenever Kun exits the house and into the garden that the seemingly supernatural elements take place. There’s never a reason given why this happens, which always feels infinitely refreshing in this day and age when movies feel like they want to hand deliver an explanation for everything to the audience.

Mirai mostly plays out like a series of episodes, each one bringing a different otherworldly occurrence to Kun, and each helping him grow and learn his role as a big brother (even when his baby sister from the future is older than he is). On the downside, some of these ‘episodes’ can drag on a bit. This isn’t too noticeable at first, but when you realize that the future version of Mirai isn’t in the film all that much, it does feel like a little bit of potential is missed in the film’s most unique element to its core brother-sister relationship.

The inconsistent pacing is a small price to pay, however, for how charming and sweet Mirai ultimately is. The characters are believable and easy to sympathize with (again, Kun is just a small boy, so his jealousy for his baby sister never comes across as petty, just a confused child who doesn’t understand the change around him). And as stated, it’s unique to see him interact with a future version of his sister, as the older Mirai appropriately reacts to Kun as someone she’s known for many years, while also remembering she’s speaking to a child version of her older brother. It’s the same kind of topsy-turvy take on familiar relationships that made Your Name feel so unique. 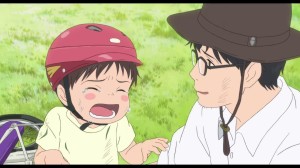 Much like Hosoda’s previous work, Mirai is an absolute marvel in the visual department. Featuring some of the most fluid animation in years, as well as some of the most charming character designs, Mirai is instantly pleasing to the eyes. And it only grows into more and more of a visual spectacle as it goes, and Kun finds himself in even more otherworldly encounters. While the CG wonderlands we’ve grown accustomed to in animation are also eye-striking, there’s an ethereal element to traditional, hand-drawn animation that just feels so mesmerizing – maybe even uplifting – to look at. It’s great to see the world of anime keep traditional animation alive, and Mirai is among the best looking ones. 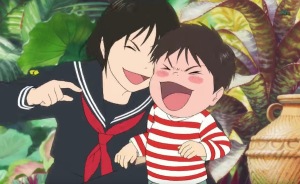 Although animation in the west is often stigmatized as exclusively child’s fare, it really is a medium that can present stories for any audience. And films like Mirai sum that up on their own. Mirai is simple, sweet and cute enough to delight children. But it’s also complex and deep enough to hold any adult’s interest. Mirai is simply a wonderful movie. 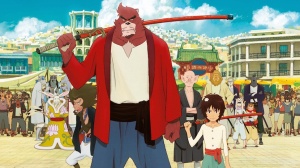 The Boy and the Beast is the latest film from director Mamoru Hosoda, whose previous works include The Girl Who Leapt Through Time, Summer Wars and Wolf Children, which have made Hosoda one of Japan’s most acclaimed animation directors. Like the three aforementioned films, The Boy and the Beast won the Japanese Academy Award for Animation of the Year (Japan’s equivalent of the Best Animated Feature Oscar), further cementing Hosoda’s legacy. It isn’t simple redundancy that The Boy and the Beast gets such praise, however. Despite a few dips in pacing midway through, The Boy and The Beast is a real charmer.

The story centers on a young boy named Ren who, after his mother passes away, runs away to avoid living with his relatives (his parents were divorced, and he doesn’t know the whereabouts of his father). During his time on the streets, Ren encounters the wandering beast-man, Kumatetsu, a large anthropomorphic bear-like figure.

Kumatetsu (somewhat jokingly) offers Ren to become his apprentice. Although Ren is resentful of just about everyone due to the recent happenings in his life, he ends up following Kumatetsu out of curiosity, and ends up lost in the Beast Kingdom. 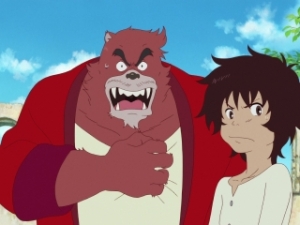 As it turns out, the lord of the Beast Kingdom is to surrender his crown, as he soon plans on reincarnating as a god, but has yet to decide on what he wants to be the god of. While the Beast Lord procrastinates his decision, there are two top contenders to take over his position as lord once he ascends: One of them is Kumatetsu, who is lazy, grumpy and a bit of a brute. The other is Iozen, a boar-man who is wise, gentle, and already has two apprentices in his sons. Kumatetsu and Iozen are to duel each other, with the winner being declared the new Beast Lord (their rivalry is a friendly one, and it is the law of the Beast Kingdom that all swords remain sheathed even in combat). Between the two, Iozen seems like the far more likely candidate, and Kumatetsu believes finding an apprentice will help him better himself.

Now stuck in the Beast Kingdom, Ren becomes Kumatetsu’s rebellious apprentice. The boy doesn’t share his name with Kumatetsu, so he is renamed “Kyuta” by the beast-man. Though Kyuta is a less-than ideal student, and Kumatetsu a less-than ideal teacher, the two share many similarities in their history and personalities, and begin to gain a stronger understanding of one another as time progresses.

The story has a lot of charm to it, serving as an imaginative coming-of-age story that also has some deeper subtext. It’s also a testament to Japanese animation’s ability to appeal to all ages, as it’s easy to imagine the film keeping younger audiences entertained while also winning the interest of the older crowd.

The Boy and the Beast also takes a number of cues from classic animated films like Disney’s The Jungle Book and Hayao Miyazaki’s Spirited Away (the first few minutes that Ren arrives in the Beast Kingdom almost play as a love letter to Spirited Away’s opening, right down to the main character receiving a new name). And both Ren (or Kyuta, whatever you want to call him) and Kumatetsu may both be hard-headed, but both their strengths and flaws ultimately make them more than capable of winning the audience over.

The film is also exquisitely animated. It’s absolutely beautiful to look at, with smooth, detailed animation complimented by original and imaginative character designs. In this age when Disney seems to have once again converted entirely to CG, and Studio Ghibli’s future is in doubt, The Boy and the Beast is one of the increasingly rare films that showcases the timeless beauty of traditional, hand-drawn animation. 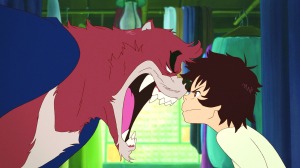 Unfortunately, not all is beautiful in The Boy and the Beast, as the film does end up suffering from some questionable pacing in the middle section. Without spoiling too much, Ren/Kyuta does find a path back to the human world at one point, and begins to live a double life, one in the human world, and one in the Beast Kingdom. Though this dilemma ultimately does serve the movie well thematically, its execution could have been handled a lot better, seeing as the Beast Kingdom half of Ren’s life goes unacknowledged for a long enough time that you may begin to wonder if its transitioned into a whole new movie (even Kumatetsu is largely forgotten during this portion of the film). However, the film does pick itself back up during the third act, and even packs an emotional punch.