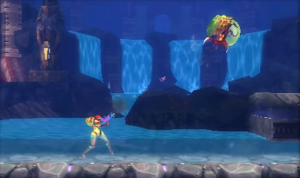 Metroid: Samus Returns serves two primary purposes: the first is to remake Metroid II: Return of Samus, originally released on the Nintendo Gameboy in 1991, and bring it up-to-date for a modern age. The second, and more important purpose, is to bring Metroid back on track, after the last decade has soiled the series’ once nearly-flawless track record. After Metroid: Other M delivered an all-time stinker on Nintendo’s part, the series laid dormant for a few years before the mediocre Metroid Prime: Federation Force polarized fans. While Metroid: Samus Returns is definitely a step in the right direction to get the series back to its former glory, its far from the franchise revival the series really needs at this point.

On the plus side to things, Samus Returns resurrects the 2D, sidescrolling ‘Metroidvania’ gameplay that the series pioneered, which is definitely a return to form as far as structure is concerned. Improvements have been made to the outdated Gameboy title, however, as Samus can now fire her weapons in any direction, and many features that didn’t arrive in the series until well after Metroid II’s original release (such as the Super Missiles and Grapple Beams) are now part of Samus’ arsenal. Additionally, Samus now has a melee counterattack she can use on enemies for critical damage, which is a nice – if maybe a bit overused – addition to the gameplay. To add a touch of RPG mechanics into the mix, Samus can now also learn “Aeion abilities,” which are performed with the usage of an energy gauge, akin to the magic points of an RPG.

These are all fine additions to the game – as are the new 3D visuals and updated music – but at the same time, they only elevate the experience so far, as Samus herself doesn’t seem all that fun to control this time around. That’s not to say that the controls are bad per se, but Samus seems to move stiffer than she did in Super Metroid way back in 1994, and the flow of the game ultimately stumbles because of it. 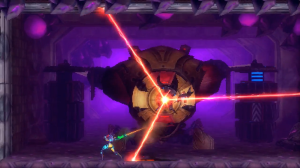 The setting of the game – the Metroids’ homeworld of SR388, also doesn’t make for very captivating level design. Metroidvania titles are at their best when they have you return to previously-explored areas with new abilities, thus being able to uncover all new paths that you couldn’t during your initial visit. But Samus Returns seems to lack that sense of surprise and discovery. With Samus’ progression being dictated by exterminating the Metroids that appear on her radar, the experience feels hallowed out to simply being about going from one point to another to shoot something. Samus Returns lacks the ‘eureka moments’ of the genre’s more refined titles like Super Metroid or Castlevania: Symphony of the Night.

If you’re a diehard Metroid fan who has felt that Nintendo has left the series out to die in recent years, Samus Returns may serve up enough classic Metroid goodness to help ease the pain of Other M and Federation Force. But it also lacks the sense of depth and engagement that the series is known for with its best entries.

It’s one small step for Samus, but we’re still waiting for that next giant leap for Metroid-kind.