The Adventures of Ichabod and Mr. Toad is the sixth and final film of Disney’s Package Film Era, and the eleventh feature in the Walt Disney Animation Studios canon overall (yes, there was a moment when Disney had more package films than proper features). As the title implies, The Adventures of Ichabod and Mr. Toad is a showcase of two short films, one based on The Wind and the Willows (Mr. Toad) and one based on The Legend of Sleepy Hollow (Ichabod). Together, these two shorts closed out Disney’s first dark age, and did so on a surprisingly high note.

It seems Disney really learned their lesson when it came to the filler segments of these package films by this point. That is to say, they realized they were unnecessary and dropped them entirely. Both Ichabod and Mr. Toad have brief introductions (using the Disney tradition of live-action storybooks leading into the animated films), but that’s it. No cutaways during the films, no banter between different narrators, none of that. This makes this particular package film feel closer to Disney’s more traditional feature films.

Both shorts are given a celebrity narrator (Basil Rathbone for Mr. Toad, and Bing Crosby for Ichabod), but they’re only acknowledged via the opening credits, and actually feel like their casting added something to the shorts, as opposed to having the film blatantly point them out in live-action segments like they’re guest stars on a sitcom.

As for the shorts themselves, they’re pretty good! Both get about a half hour of running time, which is enough for them to feel like complete stories instead of just random segments chained together like some of the previous package films.

Mr. Toad comes first, and tells how the titular amphibian comes from a line of wealthy toads (his family estate, Toad Hall, is a local landmark, and the pride of the community). J. Thaddeus Toad is less responsible than the previous Toads of Toad Hall, however, and often splurges entire fortunes on whatever “mania” he’s currently obsessing over. Mr. Toad’s close friend, Agnus MacBadger, takes it upon himself to be Mr. Toad’s bookkeeper to prevent Toad from going into complete bankruptcy.

Not that this does much good. As Mr. Toad is off on the latest fad (horse-drawn carriages), he happens upon someone driving an automobile. Having never seen anything like it, the automobile immediately becomes the newest ‘mania’ for the poor Toad. Despite an attempted intervention from his friends Ratty and Moley, Toad is hellbent on obtaining an automobile. But with his access to his fortune being cut off by MacBadger, Mr. Toad can’t simply purchase the vehicle, and is willing to try other means to claim a car of his own. 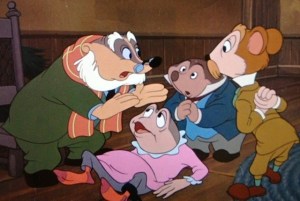 The next morning, Mr. Toad is arrested for stealing an automobile! Toad insists it’s a mistake, and that he made a trade for the car by signing away the deed to Toad Hall, only to discover after the fact that the car was stolen. But witnesses at the trial prove otherwise, and Mr. Toad is sent to jail. Thus it’s up to MacBadger, Ratty and Moley to bust Mr. Toad out of prison, clear his good name, and retrieve the deed to Toad Hall.

The Mr. Toad short is simple and straightforward, and it’s undeniably charming. Keeping in mind Disney’s early habit of making the main characters the most boring ones in their features (being too perfect if they’re given any personality at all), it’s refreshing to see a flawed main character like Mr. Toad – who is kindhearted but irresponsible -come from the studio’s earlier years. I also like the supporting cast of MacBadger, Ratty and Moley. And it’s pretty fun to see a Disney movie where the main focus of the plot is to reclaim the deed to a mansion. 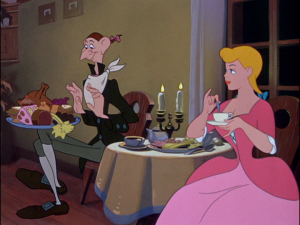 The second short, based on The Legend of Sleepy Hollow, isn’t as immediately captivating as Mr. Toad, but it gets there eventually. The plot here is focused on Ichabod Crane – a lanky, gangling character with a funny face and “feet like shovels” – who is to be the new schoolmaster of Sleepy Hollow. Ichabod is also something of a miser, finding any and every way to spend as little money as possible (from attending parties for the free food to even riding a “borrowed” horse).

Despite his peculiar looks and skinflint behavior, Ichabod is inexplicably a ladies man, often putting up with the misbehaviors of the school children, provided their mothers are “good cooks” (whether the film is aiming for a euphemism here, or simply making Ichabod’s womanizing more Disney-friendly by literally centering it around food, I’m not quite sure). This eventually sees Ichabod fall head over heels for Katrina Van Tassel, the most beautiful woman in Sleepy Hollow… who also happens to be the daughter of the wealthiest man in the town.

This leads Ichabod to run afoul of Brom Bones, the town’s local prankster who also has eyes for Katrina. Brom Bones does his best to bully and embarrass Ichabod, but the odd Mr. Crane is more clever than he lets on, and continuously outwits Brom at his own game.

It’s hard to tell who we’re supposed to root for here. Mr. Toad is certainly flawed, but he’s also a decent enough fellow that we have sympathy for his plights. Neither Ichabod nor Brom are particularly upstanding figures, but Ichabod seems to be far more focused on Katrina’s family wealth than Katrina herself, whereas Brom – despite being a prankster – is described as “meaning no harm to anyone.” So I guess Brom is the lesser of two evils.

While it may at first appear that the short is presenting Ichabod as a wily Bugs Bunny type (outsmarting his rival at every turn) the film ultimately gives Ichabod the greater comeuppance.

At the Van Tassel family’s annual Halloween party (where Ichabod has seemingly once again gained the upper hand in his rivalry for Katrina’s affections), Brom Bones discovers Ichabod’s great weakness: It turns out the schoolmaster is dreadfully superstitious. So Brom uses this to his advantage by telling the tale of the Headless Horseman, a soldier that lost his head to a cannonball blast that now haunts Sleepy Hollow to claim a new head every Halloween night.

Broms’s plan works, as his ghost story has Ichabod spooked silly. And sure enough, on his way home from the party, Ichabod Crane is tormented by the Headless Horseman, with the frightful dullahan chasing Ichabod through the night.

Much like how Mr. Toad featured a more flawed main character than most Disney films of the time (and most of them for the decades to come), Ichabod also breaks away somewhat from Disney traditions by featuring a more interpretive ending. In the original Sleepy Hollow story, it is left ambiguous as to whether or not the Headless Horseman is real, or if it was Brom in disguise playing off of Ichabod’s fears, though it heavily implies the latter. In the Disney film the answer is even more up in the air. It gives some small hints that it could be Brom scaring Ichabod out of town, but also makes it seem more likely that Ichabod is spirited away by the apparition.

Personally, I like to think the Horseman is real, because it’s just more badass to have Ichabod pay for his selfish ways by means of an evil specter. But that’s just me.

Both short films included in The Adventures of Ichabod and Mr. Toad are enjoyable and well animated. They both feel distinct (Mr. Toad being charming and cute, and Ichabod becoming genuinely frightening before all is said and done), but they both still compliment each other, and they come without any of the fluff to distract from the main attractions like some of the previous package films.

I first watched these Disney package films around ten years ago to complete my viewing of the entire Walt Disney Animation Studios canon. At that time, I didn’t feel won over by The Adventures of Ichabod and Mr. Toad. But when watching it again for this review, I find it to be the best Disney film of this dark age by some margin. The Three Caballeros is worth a look for its utter insanity, but if there’s one feature from Disney’s oft forgotten Package Film Era that has held up, it’s The Adventures of Ichabod and Mr. Toad.