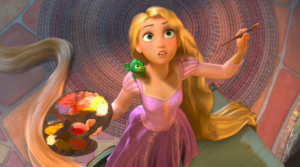 After The Princess and the Frog was released in 2009, Disney went full steam ahead and began a winning streak of memorable animated features that continues today. The first follow-up to The Princess and the Frog was 2010’s Tangled, Disney’s take on the Grimm’s fairy tale of Rapunzel. Tangled served as a continuation of Disney’s resurgence of their fairy tale musicals, but was the first of its kind to be created with CG animation. The new technology may have given Tangled a fresh look for the genre, but proved that great storytelling is timeless no matter how it’s presented.

In Tangled, Rapunzel’s 70-foot long hair is more than just something to climb on, and actually has magical properties. Long ago, a single drop of sunlight fell from the sky, and created a magic, gold flower. This flower could heal illnesses and reverse aging, powers that were taken advantage of by the selfish Mother Gothel (Donna Murphy), who kept the flower for herself to remain eternally young. That is until the queen of a neighboring kingdom grew gravely ill just as she was about to give birth. The kingdom’s guards found the flower, and used it to heal their queen, whose baby girl, Rapunzel (Mandy Moore), inherits the flower’s magic in her hair. 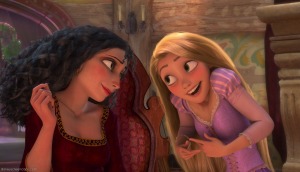 Mother Gothel, wanting the flower’s magic once again, kidnaps Rapunzel, and raises her in an isolated tower, teaching Rapunzel to fear the outside world as a means to keep Rapunzel (and her magic) to herself. In honor of their missing daughter, the king and queen, along with their entire kingdom, light a series of floating lanterns every year on Rapunzel’s birthday. Though Rapunzel is completely naive to the true nature of the lanterns, she watches them from her distant tower every year, feeling that their regular occurrence on her birthday holds some significance, and it becomes her dream to see them up close.

As fate would have it, during one of Mother Gothel’s journeys, Rapunzel gets an uninvited visitor in the thief Flynn Rider (Zachary Levi), who is fleeing from the neighboring kingdom’s guards after stealing a crown. Rapunzel hides the crown, and makes a deal with Flynn that she will return it if he takes her to see the “floating lights” on her approaching birthday, which sets of an adventure for the two that sees them on the run from Maximus – the captain of the guard’s impossibly diligent horse – as well as Flynn’s former partners-in-crime. Not to mention Mother Gothel, who returns to find a missing Rapunzel and will do anything to make sure she doesn’t learn the truth.

It’s a simple plot, and one might say it’s even more traditional than The Princess and the Frog, but what makes Tangled stand above its predecessor is its execution. Though it has a smaller cast of characters than its immediate predecessor, they are each given a good amount of focus and time to develop. They may fall into the traditional Disney archetypes (the heroic princess, dashing young rogue, and cold-hearted villain), but Rapunzel, Flynn and Mother Gothel all end up leaving an impression. The same can be said for the animal sidekicks: Pascal, Rapunzel’s pet chameleon, and the aforementioned Maximus, who is a particular highlight simply by being a horse (his role could have been filled by the captain of the guard himself, but making his horse the Javert to Flynn’s Valjean was a stroke of genuinely creative comedy).

Granted, the characters aren’t as deep or complex as some of those in the Disney films that would follow (Rapunzel’s introductory song, while catchy, pretty much describes how she’s good at everything she does), but they are all wonderfully realized with great writing and voice work. 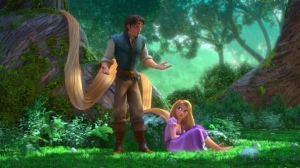 Another highlight to Tangled is the animation itself. It was here that Disney started implementing more techniques usually reserved for traditional animation into their CG features, and it has helped Tangled (and subsequent features) have a more visually timeless quality than most other computer-animated fare.

The more caricatured designs of the characters, and their extravagant, yet fluid and controlled, movements, and the vibrant colors help make the film not only come to life, but visually hold up nearly as well as a hand-drawn feature (it might be said that some of Disney’s subsequent CG equals the timeless quality of traditional animation, with Tangled giving the studio the opportunity to perfect their craft). Tangled is simply a beautiful film to look at.

One slight downer is that the songs, composed by Disney veteran Alan Menken, aren’t among Disney’s best. Like Princess and the Frog, the songs are all good, but aside from the film’s most iconic number (I See the Light, which is quite beautiful), the songs aren’t among the most memorable Disney tunes. Again, nothing bad, but Tangled can feel more like a movie that happens to have some songs in it, as opposed to a full-on Disney musical.

In retrospect, Tangled can feel a little bit like a test run for things to come (specifically Frozen, as well as Moana), as it’s tried-and-true traditions prevent it from reaching the same heights as some of its successors. But Tangled is still an excellent film in its own right, containing a sense of sincerity and charm that was sorely lacking in most animated features in the years before its release, all while providing a good helping of fun and entertainment. Tangled can be seen as something of a bridge then, being the last of Disney’s straight-up traditional fairy tales, and segueing into Disney’s current direction of evolving their fantasies and princesses. It’s definitely a bridge worth crossing.