In this day and age, where pop culture is obsessed with nostalgia, it seems anything is fair game for a remake, reboot or sequel. Whether it’s beloved franchises making a welcome return, or something more obscure crawling its way back into the spotlight, if it existed in the 80s or 90s, it’s making a comeback. 2017 saw the baffling return of Bubsy – the nadir of the 90s platforming boom – and now 2018 follows suit with the “long-awaited” sequel to Shaq-Fu, widely regarded as one of the worst video games of all time. Though to its credit, Shaq-Fu: A Legend Reborn at least knows what it is, and while that may mean it’s a bad game, does it hurt it that much if that’s pretty much what it was trying to be?

Calling A Legend Reborn a sequel to the original Shaq-Fu may not be entirely accurate, as both are actually very different games. The original was a fighting game, while this entry is a side-scrolling beat-em-up. What they have in common, however, are Shaquille O’Neal, and a whole lot of absurdity.

Here, Shaquille O’Neal is a “humble, Chinese rickshaw driver,” who learns kung-fu from Master Ye-Ye. Shaq ends up being a chosen one destined to defeat an evil demon who threatens the Earth every 1,000 years. The demon’s newest plan is to subvert the human race by “stupefying” them with celebrity culture. So it’s up to Shaq to fight armies of demons and celebrities in order to save the world. 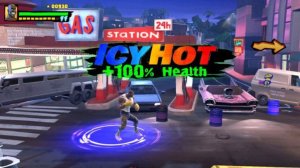 Yeah, it’s stupid, and it knows it. The downside is that the whole “ironic, self-aware, fourth wall-breaking” brand of humor is kind of white noise in this day and age (sorry Deadpool fans). Making fun of tropes has become the single most cliched trope out there by this point. With all that said, I will admit that Shaq-Fu: A Legend Reborn has some genuinely funny moments, due in no small part to Shaquille himself, who certainly seems to have a great sense of humor at his own expense (one of the game’s best meta-gags is that its life-replenishing item is the Icy Hot Patch, which Shaquille O’Neal is of course the spokesperson of in real life).

The jokes on celebrity culture can be a bit of a mixed bag. On one hand, basing a boss fight off an angry, drunken Mel Gibson is something that will always be funny, but a boss fight parodying Paris Hilton seems about a decade late. Of course, due to legal reasons, the game can’t use the real names of these celebrities (a la South Park), so instead has to make due with approximations that you wish could at least be a little bit closer to the real thing (a la The Simpsons).

In terms of gameplay, well, it’s fittingly mindless. Just punch hordes of enemies to build up “combo points” which you can then use to unleash Shaq’s size 22s to flatten the bad guys. And if you build up power (which is strangely separate from the combo points), you can perform the Shaq Smash, which easily dispatches foes. Occasionally, you can find two different power-up transformations: The Shaq Diesel merges the basketball star – excuse me, rickshaw driver – with a diesel engine, allowing Shaq to perform rapid punches simply by holding the attack button. But punch too much and you’ll have to unleash a diesel powered Shaq Smash, lest the engine burn up without unleashing that power. The other transformation (and another one of the game’s best gags) is the “Shaqtus,” which is, as it sounds, Shaq as a cactus, allowing him to shoot spines at enemies.

The transformation sequences are the game’s best bits, as they are really the only times the gameplay changes from what is a rather monotonous beat-em-up. Sure, you can pick up weapons here and there, but nothing else really changes up the button-mashing gameplay to any significant degree.

But hey, this game was designed entirely to be a joke and follow-up one of the most infamous games of all time. So I guess the monotony was intentional? Even if we give Shaq-Fu: A Legend Reborn that benefit of a doubt, however, the game still has some glaring shortcomings in execution and technical polish.

First and foremost, it’s baffling to think that Shaq-Fu: A Legend Reborn is exclusively a single-player game. Beat-em-ups are a genre made for couch co-op, and with a game like this, which is intentionally stupid, wouldn’t it be the kind of joke that’s funnier if you’re sharing the experience? This is only magnified more by the fact that, at six stages, Shaq-Fu: A Legend Reborn is incredibly short, and provides little (if anything) in the way of replay value. Had the game featured multiplayer co-op, the act of sharing Shaq Fu with someone else might have been incentive enough for some replays.

Then there are technical issues, and not just simple slow-downs and light freeze-ups, either. During my playthrough, the first time I died wasn’t by an enemy hand, but by Shaq randomly sinking into the ground and the game suddenly telling me I’m dead. And the game completed froze on me at least four times (two of which were on the same section) in my playthrough.

Look, I don’t know what else to say. Is Shaq-Fu: A Legend Reborn a good game? Certainly not. But that’s kind of the point. It’s a title made entirely to live off the legacy of a notorious 90s game. It purposefully sets the bar low, and, well, it hits the mark it set out to. Not all of the humor works, the gameplay is repetitive, and the technical issues are glaring. But hey, Shaquille O’Neal himself has a good sense of humor about it. So I guess I can too.

Very few video games are as infamous as Shaq Fu. A fighting game of the 16-bit era starring Shaquille O’Neal named after the NBA star’s rap album, the game is often considered one of the worst video games of all time.

In case the idea of a fighting game based around a NBA star and named after said NBA star’s rap album wasn’t weird enough, the game’s story mode sees Shaq walking around Little Tokyo, where he stumbles across a kung fu dojo (forget the fact that Tokyo is Japanese and kung fu is Chinese). In this dojo Shaq meets an old man who deduces that Shaq is “the magic one.” The old man then opens a portal to another dimension, where Shaq must apparently save the life of a young boy named Nezu. Shaq jumps into the portal without a second thought. Because why not?

The opponents Shaq comes across are a parade of bizarre characters that include a cat girl, a voodoo princess, a hooded goblin-like creature, and a villainous mummy named Sett Ra, who kidnapped Nezu. So if you were hoping to see Shaq battle fellow NBA stars in another dimension, you’re out of luck.

As bonkers as the story is, it’s actually the game’s highlight, as its utterly ridiculous nature can provide some good laughs. The sheer lack of context behind everything in the plot (who is Nezu? Why was he kidnapped by a mummy? Why doesn’t Shaq seem weirded out that he’s fighting monsters in another dimension?), and the general absurdity of it all is just so silly it teeters in the “so bad it’s good” area.

Shaq Fu’s true fatal flaw is its gameplay. Shaq, or the other characters if you’re playing versus mode, are all incredibly stiff. Moves just don’t flow very well, meaning combos are a non-entity. You basically just keep button-mashing and hope you get lucky. The jumping is the worst part, with Shaq leaping into the air about a second after you hit the button. The jumping is not only awful, but also ironically so, considering Shaquille O’Neal’s NBA background. 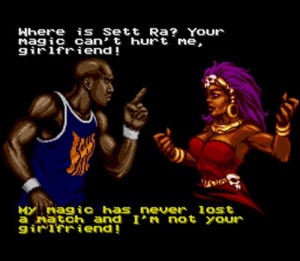 The story mode also has an awkward difficulty curve. The SNES version has three available fights to choose from the start, and completing those opens up three more that are progressed in order. Some fights are so easy, you can just keep hitting the same button and win (in one fight I just repeatedly kicked my opponent who did nothing but block, which resulted in him losing enough health by the time the clock ran out that I won the match). Others are considerably more difficult, with the aforementioned cat girl, one of the initial fights, being a particular pain, along with the final battle against the mummy.

Shaq Fu’s reputation proceeds it. It is a dreadful fighter that lacks any kind of depth, with a terrible sense of control and goofy visuals and animations to add a cherry on top. It may not be the most broken game I’ve ever played, but it’s certainly one of the worst fighters out there. It’s a sloppy, clunky, unpolished mess, made marginally more tolerable by its unintentionally comedic nature.

In short, it’s far from an all-star.