While princesses have become synonymous with Walt Disney Animation over the decades, it may come as a surprises to learn that for the first twenty-two years from the studio’s first full-length feature, there were only three Disney Princesses, with a fourth not arriving until The Little Mermaid was released in 1989! Snow White was in the very first Disney feature in 1937, with Cinderella arriving in her titular film in 1950. The lone princess to arrive in between Cinderella and The Little Mermaid was Aurora, who was the central character of Sleeping Beauty, released in 1959.

Well, maybe referring to Aurora as the film’s central character isn’t quite accurate, as she – along with her love interest, Prince Phillip – aren’t much of characters at all. In fact, Princess Aurora infamously only gets around eighteen minutes of screen time in the entire feature! That’s a shame, because otherwise Sleeping Beauty has a strong cast of characters: It features a trio of comical fairies, a duo of bombastic kings, and arguably Disney’s most iconic villain in Maleficent.

Sleeping Beauty plays out very similar to Snow White and the Seven Dwarfs: Aurora takes the role of a beautiful princess under a sleeping curse from Snow White herself, the three good fairies play a similar role to the Dwarves, Maleficent is an evil sorceress/queen like Snow White’s villain, and Prince Phillip is…well, he’s a Disney prince. They’re all basically the same, really.

The story here is that Aurora is born to King Stefan and Queen Leah, and at her christening, she is betrothed to Prince Phillip, the son of King Hubert of a neighboring kingdom, to unite their people. Also at the christening are the three good fairies, each of whom are to give Aurora a gift.

Flora, the red fairy, gives Aurora the gift of beauty. Fauna, the green fairy, grants the gift of song. But before Merryweather, the blue fairy can bestow her gift, the christening is interrupted by the evil fairy, Maleficent. You have to give it to Disney, they really know how to introduce a villain, with Maleficent’s arrival being met with fear by the humans in attendance, and contempt from her fellow fairies, instantly telling the audience she’s bad news. 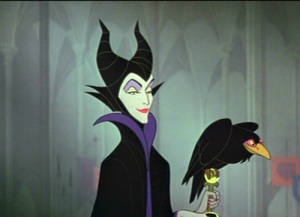 Maleficent, holding a grudge for not being invited to the christening, takes out her frustrations by cursing the child. Maleficent’s strangely specific curse states that, on her sixteenth birthday, Princess Aurora will prick her finger on the spindle of a spinning wheel and die. Maleficent then vanishes, and Merryweather steps in to counter the curse as best she can. Though Maleficent’s dark powers are too great for Merryweather to undo the curse outright, she is able to alter it, making it so Aurora won’t die by the spinning wheel, but fall into a cursed sleep that can be broken by “true love’s kiss.”

King Stefan then orders that every spinning wheel in the kingdom be burned, and as an added precaution, Aurora is sent to live in the woods with the three fairies until the day after her sixteenth birthday, at which time she will return to her family and kingdom and resume her life as a princess. The fairies disguise themselves as human peasants to raise Aurora, fearing usage of their magic would alert Maleficent to their whereabouts.

Fast-forward sixteen years, and the fairies are preparing for Aurora – who  they have named “Briar Rose” to hide her identity – to return home. They decide to do something special for the occasion, and plan on making a new dress and a birthday cake for Briar Rose. So the fairies send Briar Rose to pick some berries while they prepare for her surprise party. While out, Briar Rose meets up with Prince Phillip, though because they haven’t seen each other since one was a kid and the other an infant, they don’t recognize one another, especially with Aurora going by “Briar Rose” now. The two instantly fall in love anyway, and this creates a fun sub-plot where King Hubert believes his son Phillip is set to marry a peasant girl, and can’t find the words to explain the situation to Stefan.

While Briar Rose meets up with Prince Phillip in the forest, the fairies’ plans for the surprise party go awry. Still not having mastered human ways in sixteen years, their attempts at baking and sewing lead to disastrous results. The fairies cave in to their impatience, and decide to break out the old magic wands, figuring using magic for a cake and dress wouldn’t be enough for Maleficent to detect.

Aurora has successfully eluded Maleficent for sixteen years largely due to the fact that the evil fairy’s henchmen – an assortment of pig and bird-like goblins – have still been searching for a baby for all these years, not understanding the aging process of humans. With time running out for her curse, Maleficent sends her pet crow to track down the lost princess, which he does by witnessing the fairies using their magic for Aurora’s would-be surprise party.

After Briar Rose is informed of her true identity and secretly brought into her castle by the fairies, Maleficent more or less cheats her way to having her curse fulfilled by conjuring a spinning wheel out of magic, and hypnotizing Aurora to touch it (the movie is titled Sleeping Beauty, so I don’t think I’m spoiling much by revealing Maleficent’s curse comes to fruition). Devastated that they failed within the eleventh hour, the fairies put the people of Aurora’s kingdom into a deep sleep to spare them their grief, and they will only awaken when Aurora herself does (I hope for their sake there aren’t any hostile kingdoms nearby, as the fairies’ spell – while well intentioned – seems to not take into account the grizzly possibilities of a defenseless kingdom). Luckily, the fairies manage to eavesdrop on King Hubert at the last moment, and piece together that the mystery man Aurora met in the woods and Prince Phillip are one and the same. So the fairies rush to aide the prince in a daring quest to save Aurora. 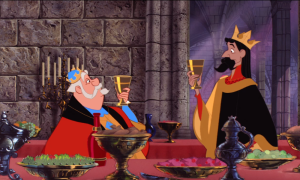 Despite its strong similarities to Snow White, Sleeping Beauty still manages to stand on its own two feet. Though the fairies are lesser in number than the Dwarves of Snow White, they have similarly strong personalities, charm and comedic appeal. Maleficent is a memorably scary villain who earned her place as one of Disney’s most memorable foes (even if the more recent duo of live-action remakes centered on the dark fairy have kind of altered her reputation for modern audiences). And both Kings Stefan and Hubert are given some extensive time to win audiences over with their antics.

That’s why it’s such a shame that Princess Aurora and Prince Phillip are probably most people’s go-to examples when it comes to the frequent criticism of Disney movies having cardboard main characters who are completely outshined by the supporting cast. And although not a flaw per se, it does seem kind of funny to modern audiences to see a movie like this try to pass off an arranged betrothal as “true love,” especially considering how little Aurora and Phillip know of each other. Sure, Sleeping Beauty is a very direct fairy tale in that regard, which can have an appeal of its own. But I find it weirder that some audiences criticize contemporary Disney movies for ‘modernizing fairy tales,’ when a movie like Sleeping Beauty is kind of proof that fairy tales needed some modernization. 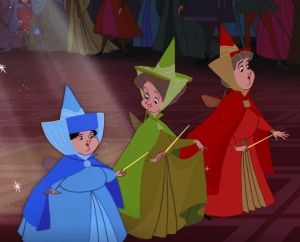 Although Sleeping Beauty can’t quite recapture the same quality as Snow White and the Seven Dwarfs, it comes close enough to be considered something of a Disney classic in its own right. It’s vibrantly animated and full of visual detail (Flora and Merryweather’s disputes to magically change things pink and blue are a particular visual highlight). But if we’re being honest, we watch Sleeping Beauty for Maleficent, the fairies and the kings. No one is watching it because Aurora and her prince have anything interesting about them.