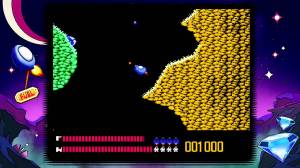 Solar Jetman: Hunt for the Golden Warship is the third entry in Rare’s original franchise, Jetpac, and was released a notable seven years after its predecessors. By 1990, the video game landscape had changed considerably, with Rare being creative in thinking of ways to bring Jetpac up-to-date for its third entry. Though some of these (then)modernizations were impressive for their time, and the game boasts some fun ideas, some of its elements have succumbed to age.

In Solar Jetman, that ever-persistent astronaut must navigate a series of planets while in search of the pieces of the legendary Golden Warship. This time, the titular “Jetman” pilots spaceships through these planets.

Players travers cavern-like stages, with the spaceships being able to rotate 360 degrees. If the ship gets destroyed, Jetman is back to his old jetpacking ways, and can return to his base to pilot a new ship. Only if Jetman is killed outside of his ship does the player lose a life.

Both Jetman and his ships can shoot at enemies, but only when piloting a ship can the player retrieve the warship parts or extra fuel. In the first stage, you can even pick up an upgrade for the ships to activate shields to reduce damage, but in a clever twist, you cannot retrieve ship parts when the shield is turned on.

Things get tough when trying to take a ship part back to your base, as the extra weight of the object makes it harder to navigate. And, in perhaps the game’s most notable technical achievement, every planet you visit has different levels of gravity.

These are all interesting mechanics, but you may find the basic controls are tough enough to handle, and when combined with pulling ship parts and the gravity effects, things can get a little frustrating. 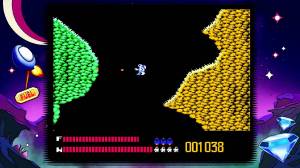 Pressing left and right will change the direction of the ship, while pressing up and down awkwardly activates the shield. Meanwhile, pressing the A button is what sends your ship forward. That may not sound too difficult, but even the slightest press of the A button will send your ship pretty far, and if you run into walls, you take damage (if your shields aren’t up, said damage is considerable). Again, the levels are cavernous areas, and with the controls being so sensitive, you’ll frequently find yourself crashing into every possible wall, ceiling and floor. And should your ship get destroyed, it will only take a few bumps to a wall (or a single enemy shot) to kill Jetman. As you can imagine, things can get a little irritating.

That’s not to say that Solar Jetman is a bad game, it’s just one that may be difficult for modern gamers to get into. It does have a lot of great ideas going for it – with the fact that the different gravities were pulled off in 1990 being its most impressive feat – and being released seven years after the previous games, the graphics are certainly cleaner and more detailed (as frustrating as turning the ships may be, the animation of the ships rotating is still impressive), and there’s actually music this time. When you throw in things like warp zones, which will send you to bonus areas or other worlds entirely, and Solar Jetman was a pretty impressive achievement in its day.

In the end, one’s appreciation for Solar Jetman will likely depend on their patience for retro games like this. Like the original Jetpac, there definitely is something strangely fun about it, but unlike the original, Solar Jetman lacks the accessibility and instant satisfaction of arcade-style gameplay, thanks largely to the awkward ship controls.