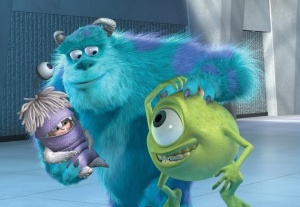 Aside from the Toy Story movies, Monsters, Inc. is probably the most fondly remembered of Pixar’s early creations. Directed by Pete Docter (who would later direct Up and Inside Out), Monsters, Inc. established the filmmaker’s knack for imaginative and heartfelt storytelling, even if it may feel somewhat prototypical when compared to some of Pixar’s (and Docter’s) later works.

The heroes of the film are James P. “Sully” Sullivan (John Goodman), and Mike Wazowski (Billy Crystal). The former is a big, blue, purple-polka dotted fellow, and Monster’s Inc’s top scarer. The latter is a short, green and spherical cyclops who acts as Sully’s manager. Together, they compete with the chameleon-like Randall Bogs (Steve Buscemi) for the all-time scare record, until a new priority comes into the duo’s life.

One night, one of the closet doors is left active after work hours, and as Sully investigates, he inadvertently allows a young human girl (whom he later names “Boo”) to walk into the monster world. It then becomes Mike and Sully’s mission to get the girl back to her home (while simultaneously overcoming their fear of her) and unravel a bigger mystery surrounding Monsters, Inc. itself.

It’s hard to imagine the premise could be any more charming. Pete Docter’s films tend to be Pixar’s most whimsical creations, and that was immediately evident here. The character designs of the monsters are among Pixar’s most creative, and help give the film a constant visual liveliness. Best of all is that this whimsy is showcased in the story and characters. 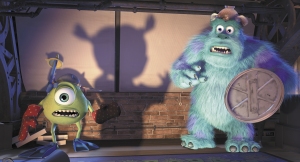 Sully is quite likely the most huggable character Pixar has ever made, while Mike provides the film with plenty of laughs. The dynamic between the two characters provides some of Pixar’s best chemistry, and their friendship with Boo gives the film plenty of heartfelt and (true to Pixar tradition) tear-inducing moments.

The film was also perfectly cast, as John Goodman, Billy Crystal and Steve Buscemi provide some of the best vocal work in any Pixar flick (with a small role from Pixar regular John Ratzenberger as the Abominable Snowman also being memorable). Coupled with the film’s solid script and writing, the actors help bring the story to life.

The animation of Monsters, Inc. is another highlight, even if it is showing its age a little. The complexity of Sully’s fur alone was an achievement in animation, and every monster shares in said complexity, whether it be Randall’s camouflage or the slimy frown of Roz – Monsters, Inc’s grouchy administrator – Monsters, Inc. is filled with visual inventiveness.

It’s hard to find much fault in Monsters, Inc. by its own merits, though it must be said that much of what it did has since been bettered by later Pixar movies. Monsters, Inc. introduced us to much of Pixar’s trademarks, as well as the hallmarks of Pete Docter’s creations. But when compared to some of the studio and director’s later films it falls a tad short. It lacks the subtleties of Docter’s other works, and the humor isn’t as sophisticated as future Pixar films. Monsters, Inc. has retroactively become a middle-tier Pixar film then. But by its own merits it’s still a great film in its own right.

While Monsters, Inc. may not have the same depth of Pixar’s finest, it remains impeccably charming, highly entertaining, and undeniably heartwarming. It’s still a fun and emotional ride that should delight audiences of any age.