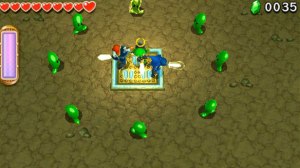 Though The Legend of Zelda is more renowned for its single player adventures, the series is no stranger to multiplayer games. The Four Swords sub-series introduced co-op mayhem to the land of Hyrule, while Phantom Hourglass and Spirit Tracks featured multiplayer modes of their own. Tri Force Heroes is the latest multiplayer entry in the iconic series, and puts some new spins on the concept on the Nintendo 3DS. Though for all the fun Tri Force Heroes brings to the table, it brings just as much frustration with it. 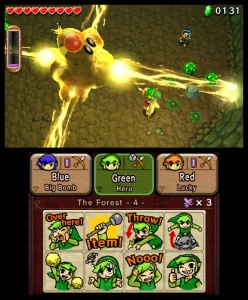 From the get-go, it’s clear that Tri Force Heroes isn’t like other Zeldas. The story takes place in a land called Hytopia, a kingdom that takes pride in its fashion sense. When their princess is cursed to wear an ugly, unremovable bodysuit by a witch simply called “The Lady,” the kingdom falls into despair. A prophecy tells of a group of three pointy-eared heroes who will save the day. The call for a hero is answered by Link – apparently the same Link from A Link Between Worlds – as well as two other unexplained Links. Link, looking to hide his heroic origins for some reason, dresses in many fashionable Hytopian outfits during the adventure, with Link’s wardrobe ranging from Goron costumes to Zelda’s dress.

It’s a strangely un-Zelda-like setup that kind of takes away from the series’ usual tone. Even when Zelda has been more humorous and lighthearted in the past, there was still some sense of seriousness to the equation. The plot might be a little more forgivable if this were a spinoff like Hyrule Warriors, but this is the official follow-up to A Link Between Worlds, which just makes things feel misplaced and goofy.

Tri Force Heroes retains the same top-down gameplay from A Link Between Worlds, so there’s no problems with how Link controls. Meanwhile, the setup is something new for the series, with the kingdom of Hytopia serving as a kind of hub world, with a primary shop that sells Link his outfits, as well as additional shops that sell other items. The center of the town is the castle, which is where Link is sent on missions in the “Drablands” and meets up with the other heroes.

The castle is essentially an online lobby, and the Drablands are where the brunt of the action takes place. The Drablands are separated into eight “worlds,” each consisting of four levels. Every level works like a condensed version of the series’ dungeons, and have four floors, the last of which being a boss fight or a horde of enemies.

Every level houses three items such as the boomerang, bow and arrow, hammer, bombs and other such Zelda mainstays. Some levels feature three unique items, while others have multiple copies of the same item. But there’s always one item for each player, and every level’s puzzles are built around the items.

The level design is smart in this regard, continuing the series tradition of keeping players thinking of new ways to utilize the mechanics. Having three players trying to figure out how to work together to solve puzzles can be a joy. That is, when you can manage to find a team who’s willing to learn the ropes and not just throw their teammates off cliffs or quit the first time it takes more than a few seconds to solve a puzzle. All three players share a pool of hit points as a means to demotivate trolls, though you’d be surprised how many players still insist on team-killing. Finding a good team to stick around can take a good while, and the game makes little effort to make the process easier. 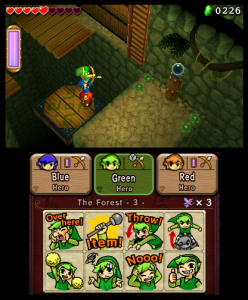 Communication proves to be a major problem in the game, simply because there’s so little to work with in this regard. Your only means to communicate with other players is by tapping icons on the touch screen. It’s a nice little mechanic that, in concept, allows players to give each other an idea of what they’re supposed to do instead of outright giving it away, but the icons are just too few. You have the options to say things like “hello” or “item” or “no.” Or you can give each other a thumbs up or cheer yourselves on with pom poms. They’re cute, but they’re so limited that they provide no help if your teammates are at a loss. A few more helpful icons could have made a big difference.

A key feature in the game is the Links’ ability to stack on each other’s shoulders to form a totem pole. It’s a simple feature, but it’s used in a few inventive ways with a number of the game’s puzzles and boss fights. Though it too can become hindered with the lack of communication.

It is possible to play the levels in single player, but it’s not recommended. Not only does it defeat the purpose of the game, but it also proves to be tedious and boring. In place of two other players, Link is accompanied by two dummies called Dopples. Players can take control of either Dopple and their original Link at any time by tapping the touchscreen. As you may have guessed, it proves to be an arduous process, and having one person switch between characters to solve puzzles that were intended to be done by three people just feels slow and clunky.

On the bright side of things, if you can find a capable group of people either online or locally, the game can actually provide some fun. The many outfits you get throughout your journey also add variety to the gameplay, since they not only change Link visually, but also grant him special abilities. The aforementioned Zelda dress, for example, makes hearts appear more frequently, while the Goron outfit allows Link to swim in lava.

Revisiting levels with different outfits allows you to approach them in different ways and keep things fresh. Similarly, defeating the boss of a world allows you to select new sets of challenges within the levels in that world. So in theory there is incentive to go back to stages once new costumes are unlocked, though the levels aren’t smart or creative enough to make revisits too desirable.

Tri Force Heroes does look great, combining the aesthetics of A Link Between Worlds with Wind Waker-inspired character designs. The soundtrack shares a similar sense of quality. It’s far from the best Zelda soundtrack, but it’s more memorable and serious than the rest of the game’s tone, which adds a decent sense of adventure despite the awkward plot.

If you can find the right group, Tri Force Heroes can provide some fun. Though just as easily you find a group that makes things more frustrating than anything. And if you go it alone, it’s outright boring. Under the right circumstances Try Force Heroes can be a little treat, otherwise it’s simply the most uneven Zelda to date.