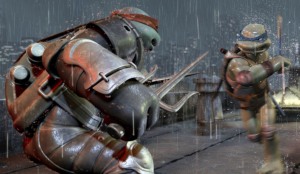 TMNT – the strangely titled fourth feature film in the Teenage Mutant Ninja Turtles franchise – is kind of the odd duck in the series. It’s the only fully animated film in the entire TMNT franchise, was produced by the now-defunct Imagi Animation Studios, and is ambiguous as to whether or not it keeps continuity with the three live-action films of the 1990s (there are hints and Easter eggs that imply it does follow those films, with contradictory elements leaving that connection in question). TMNT often seems forgotten in the Ninja Turtles movie lineage – despite just recently becoming a decade old – which is both understandable and a shame.

This is understandable because, despite a genuine effort by Imagi Animation Studios, TMNT is largely forgettable in plot. But it’s a shame because, when it works, TMNT hints that a bright future may have been in store for animated Ninja Turtles films, if such films were allowed to continue.

The story here is that, 3,000 years ago, a warlord named Yeotl discovered a portal to another dimension. The portal granted Yeotl immortality, but at a price: his four generals, whom he loved like brothers, were turned to stone, and thirteen immortal monsters were released from the portal, who proceeded to destroy his army.

Fast-forward to present day New York City, and Yeotl has taken up a new name, Max Winters (Patrick Stewart), a wealthy businessman seeking to undo his immortality, as he’s spent centuries tormented by what his actions did to his friends and his army.

To accomplish this, Winters needs to capture the thirteen monsters who escaped from the portal, and send them back through. There’s an impending alignment of the planets that will allow him to reopen the portal to send the monsters back.

Anyway, Winters has hired April O’Neil (Sarah Michelle Gellar) – who now owns a company that locates relics for collectors – to retrieve four statues for him; with these statues being his petrified generals from the past. Meanwhile, Winters has also secretly recruited the remnants of the Foot Clan, now lead by the mysterious Karai (Zhang Ziyi), to retrieve the monsters.

All the while, the Ninja Turtles have gone their separate ways in life: Leonardo (James Arnold Taylor) has been sent to South America as some kind of vaguely detailed training, where he stops bandits and saves villages. Donatello (Mitchell Whitfield) is now an IT operator. Michelangelo (Michael Kelly) is an entertainer at children’s parties (“Cowabunga Carl”). And Raphael (Nolan North) stalks the streets of New York at night as the vigilante “the Nightwatcher.”

As you might suspect, the Turtles become involved with all the goings-on with Max Winters’ scheme, though they also have to deal with familial issues, as their separate paths have caused a divide in their brotherhood.

There are two main issues with the plot: The first, as you’ve probably guessed, is that it’s just too convoluted. There are just too many characters and elements at work for the short running time to know what to do with. In fact, there’s so much going on with the dilemma between the Turtles and Max Winters’ plot, that they barely cross paths until the third act, almost making things feel like two different movies collided with each other.

The other problem is that, because there’s so much going on and not enough time for it all, a number of elements feel underdeveloped or poorly thought-out. It’s one of those movies that will have you asking yourself questions about the film’s finer details as you’re watching it.

One of the big lingering questions is why the thirteen immortal monsters are all suddenly showing up at once in New York City. Perhaps it has something to do with the planets aligning, but that’s never explicitly said. Just what were these monsters doing for three-thousand years?

Another question arrises once Winters reanimates his stone generals. At first they seem like mindless zombies who follow Winters’ orders, in which case it makes sense that he’s still trying to break the curse on them. But later it’s revealed that they can indeed think independently. So does Winters really need to proceed with his plan, seeing as he now has his lost friends, albeit they are now made of stone instead of flesh and blood? Hey, if I waited three-thousand years to see my friends again, I wouldn’t mind too much if they just so happened to be made of stone. Take what you can get.

Okay, so the plot is gobbledygook. That seems to be par for the course with Ninja Turtles films. But TMNT is considerably more serious in tone than the 90s live-action movies, so the nonsense of the plot rings all the louder.

With all of this said, TMNT still has some positives going for it. Though the animation is certainly not on par with the films from bigger studios like Disney and Pixar of the time, it still boasts a stylized look that worked for the material. The voice acting is also pretty solid; and includes Captain America himself, Chris Evans, as Casey Jones, and the late Mako Iwamatsu as Master Splinter in his last film role.

On top of that, the action scenes are well made, with a duel between Leonardo and Raphael being a particular highlight. Though maybe the film should have cut back the number of monsters, since most of them are dealt with via montage, and only a few allow for any full-on fight scenes.

TMNT may not have been the full-blown franchise revival it was hoping to be (as evidenced by the fact that it never got a sequel, and another live-action reboot happened seven years later), but it has enough Ninja Turtle-ness that may make it worth a look for fans (the action scenes are an improvement over the 90s films, and it’s fun to see the Easter eggs that allude to the original trilogy). And unlike Teenage Mutant Ninja Turtles III, the original villains introduced here at least feel like they fit in with the franchise.

For fans of Teenage Mutant Ninja Turtles, TMNT can provide some fun. But its murky plot certainly holds it back as a movie in its own right, and unlike the first two 90s films, it lacks the campiness to make it a guilty pleasure.

If nothing else, TMNT is an interesting piece of Turtles history.