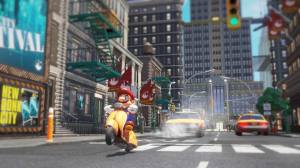 It’s almost hard to believe that Super Mario Odyssey will be released in a few short months. The game was only properly revealed in January, and after a strong E3 showing in June, it will see its worldwide release in October. For a major Mario title, that’s a pretty quick time in between reveal and release. Yet, there’s still a lot we don’t know about the game. We know of its primary “capture” mechanic, which allows Mario to take control of enemies, objects and NPCs via his hat. We know that Mario is collecting Power Moons instead of Power Stars,  and that every stage also plays into the overarching plot of Bowser trying to force Princess Peach into marrying him. And we know that Mario will be traversing a wide variety of different worlds, from big cities inhabited by realistic humans to psychedelic food-themed worlds.

One other thing we know of is that Odyssey is playing up Mario’s history in a way that perhaps no Mario game has done before. Many of the hats and costumes Mario finds along his adventure are references to the plumbers more obscure appearances, and for the first time, Mario’s original girlfriend, Pauline, appears in a proper Super Mario adventure.

This got me to thinking of what other kinds of ‘Kingdoms’ (Odyssey’s name for its various worlds) could we see show up? The aforementioned big city (hilariously named “New Donk City”) is where Pauline serves as mayor, and where the shops and street names allude to the Donkey Kong series. But what if that’s just the tip of the iceberg? What if there are more Kingdoms in Odyssey that pay tribute to Mario’s long history in one way or another?

Here are five such kingdoms I’d like to see in Super Mario Odyssey. Now, I’m really just spitballing/geeking out here, so I don’t expect to see them show up. But it would be so awesome and – considering some of the Kingdoms already revealed – not entirely impossible for them to make an appearance in some form.

The following five Kingdoms all represent a part of Mario’s history (or even that of its spinoffs) to some degree. Though seeing them literally realized would be awesome beyond words, they could also simply be implied homages to the series’ history (like how New Donk City’s street names and shops reference Donkey Kong Country).

Anyway, before I ramble any longer, let’s get to the Kingdom ideas!

END_OF_DOCUMENT_TOKEN_TO_BE_REPLACED

Here we are, the big one. Game of the Year. 2016 was a pretty great year for video games, with a wide variety of genres seeing top quality releases. With so many great games released last year, naming the best of the best can be a tall order. But here we are with my picks for the top five games of 2016!

But first, let’s give a shoutout to the runners-up, Pokemon Sun and Moon, The Last Guardian, and Dragon Quest Builders. You’re all great! Okay, now for the top five. END_OF_DOCUMENT_TOKEN_TO_BE_REPLACED

Now, lists like this are always difficult. Narrowing almost any category down to five is always a hefty task, and considering that skeletons have been a staple in video games for decades, a category like this will mean there will always be contenders I forgot to mention or will remember after the fact. Oh well, I guess I could always make a revised list later if need be.

Keep in mind that the skeletons I’ve included are all from games and series that I’ve played. So my sincerest apologies to Grim Fandango fans, but if I haven’t played it, I’d feel awkward placing its characters above those I’ve actually had experience with. Simply put, don’t hate me for not listing things on my list. It’s my list. It’s only five. I can’t please everyone.

So without further ado, the top 5 video game skeletons! 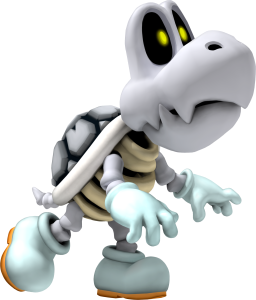 Much like Boos (and many other Mario enemies), Dry Bones first appeared in Super Mario Bros. 3. These undead Koopa Troopas are among Mario’s most persistent foes. Not only have they shown up in numerous games, but they only stay down for so long. While most of Mario’s enemies will be defeated with a jump to the head, Dry Bones will merely crumble for a few seconds, before picking himself back up.

Their placement in the Super Mario series has made them iconic, but their undead persistence is what makes Dry Bones so great. 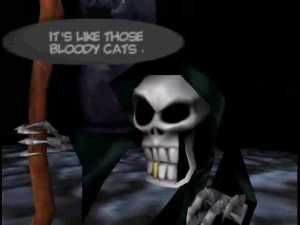 Perhaps the oddest depiction of the Grim Reaper, Greg pulls off one of the best “man behind the curtain” gags in gaming. His introduction at first seems dark and foreboding, before he steps into view to reveal his short stature and squeaky voice. He’s an expert of the nature of game overs, and has a perennial hatred of cats (whose nine lives make his job incredibly difficult).

In case the first chapter of Conker’s Bad Fur Day weren’t surprising enough, Greg the Grim Reaper’s introduction is proof that Conker is a game that just keeps the surprises coming. 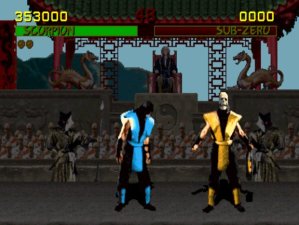 Scorpion’s undead self make him a particularly powerful Mortal Kombat warrior, with otherworldly abilities that make him an exceptionally deadly opponent.

A badass ninja on the outside, a horrifying undead warrior on the inside, it isn’t too hard to see why Scorpion remains one of the most popular Mortal Kombat characters.

Skull Man is technically not a skeleton, he’s a robot. That’s the only thing preventing him from topping this list. He still makes it this high up despite his robot-ness, however, because he’s Skull Man.

Seriously, look how badass he is! He has the coolest character design out of any Robot Master in the Mega Man series (which is saying something), has an awesome stage with cool music, and his arena is made entirely out of skulls. What heinous acts did Skull Man have to do to make that place?

Even as an 8-bit sprite, Skull Man looked like an imposing figure. Let’s forget the fact that his mimicry of Mega Man’s moves make him one of the easiest bosses in the game, and that the power Mega Man earns from defeating him is just another Leaf Shield duplicate, everything else about Skull Man is awesome.

If the Mega Man series ever sees a resurgence, and old school Robot Masters are brought back for whatever reason, Skull Man is a must to make a return to the series. So cool. 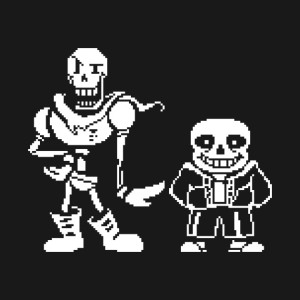 Sans and Papyrus are skeleton brothers in the monster world. Sans is the shorter, fatter (big boned?) one with a penchant for bad jokes, and Papyrus is the tall, dimwitted one with a love of spaghetti. Like many of the characters in Undertale, their character development depends on the choices the player makes. Should you go the pacifist route and spare every creature you encounter, they’ll become best buds with the player. But if you go the way of a madman and kill every monster in battle, Papyrus will do his best to put an end to your tyranny, while Sans will serve as your final judge, jury and (potential) executioner as the final boss.

Both Sans and Papyrus are bursting with personality and charm, and perhaps better than any other character, represent what Undertale is all about. For a couple of skeletons, they certainly are fleshed out.

Ouch! That was worthy of Sans…

2015 was a tremendous year in video games. We had AAA blockbusters, indie darlings, and games from all genres and categories reach great heights in quality.

Exceptionalist that I am, some games were undoubtedly better than others. Of all of 2015’s great games, these five stood out the most to me.

These five games, for one reason or another, proved to be the cream of the crop. They may not quite be the same games you’ll see dominate other people’s lists, but they are the games that had the most impact on me.

Donkey Kong Country 2 turns twenty years old this month (the original DKC has its twenty-first anniversary as well). As part of my celebration of all things DKC to commemorate this milestone year for the series, here is a top five list of the best “Animal Buddies” who have appeared in the series!

The Animal Buddies, as any DKC fan knows, are the ridable (and sometimes unridable) animals that aid DK, Diddy, and their simian friends on their adventures by providing their own sets of abilities into the mix. Think Yoshi, but with Donkey Kong instead.

The following top five are ranked from least to greatest based on their presence in the series, their general usefulness, what they bring to the gameplay, and simply how awesome they are. END_OF_DOCUMENT_TOKEN_TO_BE_REPLACED

Happy Halloween everybody! I’ve been quietly celebrating this awesome holiday through my recent string of Castlevania reviews, but I also thought I’d whip up something a little more unique on the day of Halloween itself. So here it is, a list of the top five witches in video games!

I don’t want to hear anyone say I forgot some character or failed to mention so and so. This list is narrowed down to five, after all, and it’s just based on my opinion. This is a pretty different list than usual anyway. I could always make revised editions, if that suits your fancy.

Also keep in mind that these characters have to be primarily identified as witches. No mages, sages, wizards and shamans allowed.

So without further ado, grab a witch’s brew, or I’ll get you my pretties, and your little dogs too! Or, you know, here are the top five video game witches.

Video game consoles are defined by their best games. Sometimes, consoles don’t have to wait very long to receive a console-defining game. Sometimes such a game is available on day one, if not included right out of the box with the console! Although this trend of iconic launch games has dwindled in more recent years, there’s no denying the impact a launch game can have on its system. Here are what I consider to be the top five launch games of all time. But first, let’s take a look at some honorable mentions. END_OF_DOCUMENT_TOKEN_TO_BE_REPLACED