It seems as the idea of video games as an art form continues to grow in prominence, many developers are determined to prove the legitimacy of the claim. Oftentimes they are successful in showing the artistic capabilities of the medium. In other instances, developers seem like they’re trying too hard to prove the maturity of game designs, to the point that the end results simultaneously feel both desperate to prove themselves and overly confident in their own abilities. Bioshock Infinite falls into the latter category.

Bioshock Infinite abandons the undersea world of Rapture from the previous installments in favor of a city in the clouds called Columbia. The hero is Booker, a man sent to Columbia to rescue a woman named Elizabeth to ‘repay a debt.’ But rescuing Elizabeth won’t be so easy, as she’s being held captive by one Zachary Hale Comstock – a religious zealot who serves as Columbia’s ‘Founding Father’ – and Comstock’s mechanical pet Songbird, who keeps personal watch over Elizabeth.

What starts as a simple rescue mission quickly unfolds into something bigger. There are twists and turns aplenty, and social commentaries that are so overt and insistent that they diminish whatever intrigue they might otherwise have had.

Columbia serves as a commentary to some of the shadier aspects of American history. Set in an alternate 1912, Columbia’s fancy carnivals and idealistic nature serve as a thin guise for a haven of prejudice and racism. The people of Columbia demonize Abraham Lincoln for ‘leading America astray,’ while Comstock uses religion as a means to keep his people under his thumb.

It’s all a great deal ham-fisted. Never once does Bioshock Infinite attempt subtlety, its commentaries come off more like cartoonish vilifications than contemplative observations. In a more satirical game this sheer overtness might work, but for a game that takes itself so seriously it all comes off as overly simplistic and conveniently one-dimensional (and in some instances, hypocritical). Bioshock Infinite thinks itself artistically rich, but the narrative feels more like a loud agenda than something truly thought-provoking.

The gameplay is similarly uninspired, following in its predecessors’ footsteps without feeling the need to better them. When it boils down to it, Bioshock Infinite is an incredibly straightforward first-person shooter. You still get your run-of-the-mill weaponry, which are thankfully complimented by some magic spells (referred to as ‘Vigors.’ Though they don’t exactly reinvent what the original Bioshock crafted either). Booker’s movements and sense of control work just fine, but considering this same setup has been done by countless other games, why wouldn’t they?

The problem isn’t that Bioshock Infinite’s gameplay is broken by any means. It’s just that, for a game that exudes such monumental pride for itself, its gameplay has very little creativity that it can boast as its own.

Elizabeth’s inclusion has been lauded for her contribution to gameplay as well as story. But Elizabeth’s actions are as redundant as Booker’s. She carries objects, picks locks, and performs other such standard actions that the player character can normally do themselves in other titles of the genre. Her AI is at least reliable most of the time, but she’s hardly a game-changer.

Credit must be given where it’s due, however, and if Bioshock Infinite can rightfully be proud of any of its attributes, it’s in its world design. Columbia is a striking place, not for the preachy thematics, but for its structure and atmosphere. Columbia is a world of strewn about islands in the sky, yet it feels like a complete place. It’s sinister and terrifying, with mechanical monstrosities that evoke some genuine dread. Columbia effectively recreates a time period while simultaneously creating a time.

It’s all the more disappointing then, that the game and the story involved in Bioshock Infinite don’t share in the genius of Columbia’s design. The world can create moods, but the plot feels the need to scream its intentions at the player, and the gameplay merely settles for the status quo.

The attempted artistry of Bioshock Infinite comes off as forced. It’s as though Bioshock Infinite is constantly telling the players that every next moment will be the new greatest moment they’ve seen in a video game. It’s so sure of itself and yet so bland in execution that the entire experience ends up an overall forgettable affair. There isn’t a moment that doesn’t insist on itself, yet there’s rarely a moment that feels truly inspired, whether as a video game or as a narrative.

There are certainly worse games than Bioshock Infinite out there. There are a great deal of better ones as well. But you’d be hard pressed to find any game in any genre that loved itself even half as much as this. 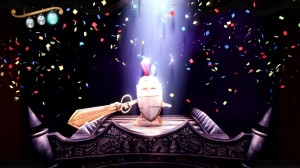 Puppeteer deserves credit for having honest intentions. It’s nothing if not an attempt to bring some color and whimsy to the Playstation brand, which is more renowned for the likes of Nathan Drake and Kratos. It’s a torch that has, for a while, been held solely by LittleBigPlanet, but Puppeteer looks to give Sackboy some company in the family-friendly department. Unfortunately, honest intentions cannot make up for a disappointing execution.

The presentation and story are charmers. Using the aesthetics of a puppet show, Puppeteer tells of a Moon Goddess who was overthrown by her subject, Little Bear, who became the Moon Bear King after stealing a magic stone. The Moon Bear King then takes on the hobby of spiriting children away from Earth, turning them into puppets, and eating their heads. One such child is Kutaro, whom the player controls. With his head gone, Kutaro is joined by the Moon Goddess’ cat, who shows Kutaro the ability to use different heads found throughout the journey, as well as helping him steal a pair of magic scissors, which become Kutaro’s weapon against the Moon Bear King’s forces on his quest to find the pieces of the magic stone, save the Moon Goddess and return to Earth (head intact). 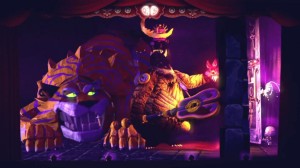 The story often invokes a sense of childlike glee, though some of its more cutesy elements come off a bit forced. The puppet show motif works as a great setup, however, as this is a 2D platformer whose stages work in segments (think every segment as a new scene in a puppet show), and the aesthetics are perfectly complimented by the PS3 hardware. Puppeteer is simply a gorgeous game.

The downside is that, in terms of gameplay, Puppeteer just isn’t very fun. It’s ideas are inspired, but an awkward, sluggish sense of control brings them down. Kutaro’s jumping abilities may feel even more weighted than that of the Sackboys who inspired him, which makes the platforming lack fluidity. Using the magic scissors to cut down the environment as well as enemies is a fun trick – which also helps the puppet aesthetics mesh into the gameplay – but its uses are too simple and restrained, preventing what could have been a compelling gameplay mechanic from meeting its potential.

Another missed opportunity is Kutaro’s ability to perform different actions through the different heads he stumbles across. Kutaro can store up to three heads at a given time, but they end up feeling more like extra health than they do power-ups (lose all three heads and it’s back to the last check point). The abilities the heads grant Kutaro seem limited to specific environmental situations – again preventing them from feeling like full-fledged game-changers – and like the scissors, they never seem to reach their potential.

A two player mode is present, with a second player having the ability to help Kutaro out by pointing out objects and finding items. It’s nothing extravagant, but should a less experienced player want to join in on the fun it provides them with the opportunity. On the downside, the second character is still present in single player, with Kutaro and his sidekick’s actions being controlled with separate analogue sticks on the same controller. It’s a setup that might work with the proper execution, but with Kutaro’s movements already feeling a bit on the clunky side, the two-characters-on-one-controller approach just makes the sense of control feel even more awkward.

I do not want to write off Puppeteer entirely. It is an appealing game that combines a great visual style with a charming, folktale-like narrative to make a game with an attitude that stands out among most of its Playstation brethren. But while Sackboy’s less-than-stellar platforming had a terrific level editor to fallback on, Kutaro is not so lucky. For everything Puppeteer does right with its presentation, it muddles just as much in the platforming department. It’s not broken, but it’s not desirable either.

Perhaps Kutaro deserves another round to take the ideas he’s been given, and fine-tune them into something great. For now, Puppeteer is a game of great style, ambition and whimsy. But one that lacks the polish it needs to send its ideas straight to the moon.

Video game consoles are defined by their best games. Sometimes, consoles don’t have to wait very long to receive a console-defining game. Sometimes such a game is available on day one, if not included right out of the box with the console! Although this trend of iconic launch games has dwindled in more recent years, there’s no denying the impact a launch game can have on its system. Here are what I consider to be the top five launch games of all time. But first, let’s take a look at some honorable mentions. END_OF_DOCUMENT_TOKEN_TO_BE_REPLACED