Here’s an unpopular opinion: The original Game Boy hasn’t aged well. Sure, there are a few games from the original Game Boy that hold up decently (namely Game Boy Color exclusives), but for the most part, its games represent a time when the convenience of gaming on the go came at the expense of quality. The Game Boy Advance, however, marked a time when handheld games began to capture a more timeless quality. The GBA was the SNES to the Game Boy’s NES, with its predecessor feeling archaic (save for a  handful of titles) while it itself holds up so well, it doesn’t feel like a retro console at all.

Case in point: Wario Land. Wario Lands 2 and 3 on the original Game Boy were once hailed as some of the best handheld games of all time, and while they’re still decent to play, they’re getting on a bit. Wario Land 4, on Game Boy Advance, however, is still a worthwhile platformer today. Perhaps not an all-time great, but it’s certainly not disappointing to revisit.

Like its predecessors, Wario Land 4 is all about the greedy anti-Mario’s quest for treasure. This time, Wario is pillaging an ancient pyramid in the middle of a jungle, but gets trapped inside and has to find a way to escape, all while collecting as much treasure as possible, of course. 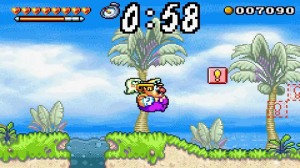 Wario retains his brutish strength from the past games, with his charging attack, ground pound and ability to pick up and throw enemies intact. Additionally, by holding the R button, Wario can run at such a great speed, that with enough momentum, his hard noggin can break through blocks that even his charge attack can’t budge. Similarly, if he ground pounds from a great enough height, he can also destroy these stronger blocks (there’s even one puzzle in the game that cleverly combines this with a teleporter, meaning that Wario was thinking with portals even before Portal).

The structure of the game takes a different approach from its predecessors, however. There’s a quick tutorial that shows you the ropes of the game (it’s actually one of the better tutorial levels I’ve seen, effectively condensing all the game’s elements to their bare basics, thus giving you insight to the entire adventure ahead). After that, the game features four worlds, which you can play in any order you see fit (and if you get stuck in one world, you can leave it and do another for the time being). The worlds themselves follow a more linear structure, however, with each featuring four stages and a boss fight at the end.

Stages work a bit differently here than they did in past Wario games (and most platformers in general, for that matter): Wario searches through the levels collecting treasures, but instead of a traditional goal found at the end of a stage, each level features a statue of a blue frog (why not?) that, when jumped on, activates a timer. With the time ticking down, Wario has to make his way back to the beginning of the stage, where a portal now waits to take Wario back to the hub. Naturally, Wario gets to keep every treasure he collects if he makes it back before time runs out.

While most of the jewels and coins scattered about add to Wario’s score, each level also contains three unique treasures: One is a bird with a key for a beak (again, why not?) which is needed to unlock the next level in that given world. Another treasure is a tablet separated in four pieces found in golden treasure chests, with all four pieces in all four stages needing to be found in order to open the boss door. Finally, a well-hidden music CD can be found and subsequently played in the sound room of the pyramid’s overworld.

While these items add some extra depth to the stages, it’s kind of a shame that – aside from the CDs – they’re required to complete the game. Had there been more non-story items, Wario Land 4 would have a fun staying power for completionists, instead of most return visits to levels being out of necessity for having missed a key or one of the four tablet pieces the first time around.

The levels themselves are well designed and creative. It’s fun to search through them for treasures, and they never feel so labyrinthian as to be confusing. The stages are also less bland than in the past few Wario Lands, with fun gimmicks added into the mix. One of my favorite stages is built around knocking over stacks of dominoes, then racing to the end of a room before the final domino falls and hits a switch that closes off a treasure.

Level design is always a make or break factor for platformers, and the clever structure and gimmicks of the stages of Wario Land 4 ascend it above its predecessors. There are, however, two notable elements that prevent Wario Land 4 from reaching its full potential. 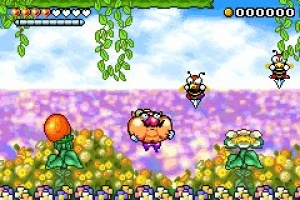 The first such issue is that, while Wario retains his ability to gain special powers after being struck by certain enemy attacks (swelling up and floating like a balloon when stung by a bee, sliding across surfaces when frozen by an enemy, etc.), Wario is no longer invincible as he was in Wario Lands 2 and 3. In the past games Wario would gain such abilities from almost every foe (with the exceptions merely robbing Wario of coins), here you rarely know when an enemy attack will give Wario a power, and when it will just take health away. It unfortunately gives the game a gambling element that wasn’t present in the past.

The other issue is the process of fighting the bosses of each world. Not only do you have to find all of the aforementioned tablet pieces in each level just to face them, but every boss also features a time limit. If you take too long to defeat a boss, you’ll miss out on the opportunities to claim all of their treasure chests. That’s not so bad on its own, as before every boss fight, Wario has the opportunity to purchase special items (from what looks like Mr. Game & Watch), which are then used to damage the upcoming boss before the fight begins. Some items will do marginal damage, while others will nearly take out the boss on their own. That may sound like a cheat, but considering this is a Wario game, it’s actually a fitting element that compliments Wario’s character and humor.

None of that is a problem on its own. The whole boss process becomes an issue, however, by the simple fact that you can’t just purchase the boss items with the treasure Wario collects along his adventure. Instead, you purchase the items with special tokens. You get these tokens by spending your points/treasure to play one of three mini-games located before the boss fight of each world. You are then awarded tokens based on your performance in these mini-games. The problem is that acquiring these tokens can take a fair amount of time, and with how slowly Wario chips away at the bosses’ health on his own, you’re going to want to spend the extra tokens for the more powerful items to beat the bosses as quickly as possible. So if you want to claim every boss treasure and complete the game at one-hundred percent, you have to repeat the process all over again if you can’t beat the boss fast enough the first time around. Some might say that’s a fair price to pay since the game essentially gives you the ability to cheat, but buying these items is optional anyway. So why not just use your points to buy the tokens and skip the mini-games? It’s just a tedious process that seems counterproductive.

Aside from those elements though, Wario Land 4 remains a winner in most respects. Wario himself controls better than ever, with his every action feeling far smoother than in past games. The level design finds some fun and creative ways to mix up the formula. The game still looks great with its colorful graphics and vibrant animations, and the soundtrack stands tall above its predecessors, meaning that collecting those CDs is worth the effort.

It may not be among the best games on the Game Boy Advance, but Wario Land 4 is another testament that the GBA is when handheld gaming truly made it.