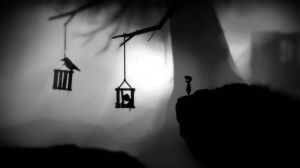 Though I am an avid supporter of the idea of video games as an art form, I have two major criticisms with many other stances that support the claim. The first is that many seem to believe that the concept of video games being an artistic expression is a newer idea, when in reality it’s easy to see that there’s always been an artistry to the medium. My other complaint is that the games that tend to be labelled as art are merely ones that declare themselves as such. The games that so desperately want to be viewed as something more than “just” a game, and continuously force themselves on the player as a means to prove their point, which only ends up making them feel more self-aggrandizing than artistic.

Video games that have truly artistic designs and narratives often go unappreciated for their artistic achievements, while lesser games can simply declare themselves as art and critics and audiences will follow suit. Though mainstream games have seen their share of such games, during the mid-to-late 2000s indie titles seemed especially susceptible to this epidemic.

Limbo can be seen as one of the poster children of this forced “art house” movement in indie gaming. Though it reaped critical acclaim and a devoted following due to its aesthetics, playing Limbo just a few short years later reveals how shallow of a game it really is.

In Limbo, players take control of an unnamed boy, who is searching for his missing sister. His actions include jumping and pushing and pulling objects, which he’ll need to do to solve puzzles and avoid countless one-hit kill traps.

The boy’s actions are incredibly limited. Perhaps it was inspired by Ico and its minimalism, but at least Ico could ward off monsters with a stick and had a second character to look after, which added some depth. In Limbo, the controls really do amount to little more than push this, pull that, and maybe jump a few times in between. Worse still is that the boy’s controls feel eerily similar to LittleBigPlanet’s Sackboy. His jumps feel weighted down, making the platforming segments feel clunky and stiff. At least Sackboy had charm and player editing to fall back on. 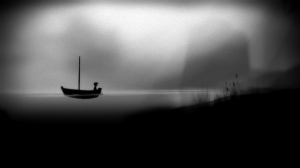 The majority of puzzles also feel incredibly bland. You might push a box onto a button, which subsequently activates a trap, but also provides your only means of avoiding said trap. Or you move a bear trap into the path of a giant, menacing spider, thus sending it running out of your path. There are a few inspired puzzles later in the game, but they are in the minority, with most of the better ones just feeling like cheap knockoffs of ideas from more genuinely creative games like Portal and Super Mario Galaxy.

The big draw of the game are the aesthetics, which admittedly do create a nice sense of atmosphere. The game is entirely monochromatic, with all the characters and objects appearing as silhouettes. Limbo also features film grain and lighting techniques, in addition to minimal ambient sounds in place of music, to give it both a retro and gloomy atmosphere.

Aesthetically, the game is unique and pleasing, but when the game itself feels so hollow, it all only goes so far. On top of the less-than desirable controls and mostly bland puzzles, Limbo also has a cheap sense of difficulty. It implements a trial and error approach not out of ingenuity, but as a means to add difficulty in its absence. You’ll often run into an unseen trap and meet a gruesome end in order to know to avoid it next time. If there were more to the gameplay the trial and error approach may not be so bad. But without gameplay depth, it just feels like a lazy means to add difficulty to an empty game. At the very least, the automatic checkpoints are frequent, which means you quickly get the chance to correct your mistakes. 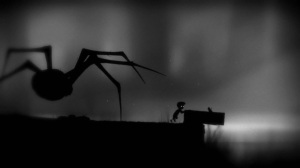 Even if you’re viewing Limbo from a narrative standpoint, there’s not much to it. This is another game that utilizes minimalism in its story, but it uses it more insistently than wisely. It wants to be an interpretive narrative, but if it leaves room for interpretation it’s only because there’s nothing there, not because it features a rich narrative or deep thematics.

Limbo is also an incredibly short game, with the whole adventure taking a little over an hour to complete. Frankly, there’s not much incentive for return visits unless you’re hunting for achievements.

To put it simply, Limbo just isn’t a fun game. I know indie gaming hipsters might counter that statement by arguing that video games, being an art form, don’t need to be fun. But while video games may be an art form, they are still games. They’re interactive, and by definition they should be engaging to play, otherwise it makes it hard to care about their other merits. Video games can indeed be more than “just” entertaining, but they should still be entertaining as well. It’s hard to invest your time in a game if playing it feels like a chore.

No matter how much a game might demand for itself to be labelled a work of art, if it’s not a good game it all becomes self-defeating. And Limbo simply isn’t a very good game. But, y’know, it’s indie and atmospheric, so I guess it’s art. 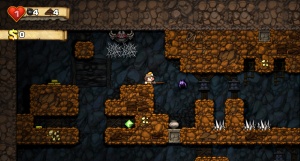 Spelunky is one of the more notable indy releases of recent years, as its a favorite among speedrunners and those who appreciate an immense challenge. The game certainly has a lot to offer such groups, and it can even boast a bit of originality. Though it’s difficult to say how much enjoyment other audiences would get out of it.

The setup of Spelunky is simple enough. You play as the Indiana Jones-like Spelunker (or one of various unlockable characters), and you navigate cavernous regions in search of treasure and damsels in distress. You fight enemies that include bats, snakes and spiders, as well as skeletons, mummies and yetis, to name a few. All the while you try to collect as much gold and other treasures as possible while finding the exits that lead to the next level in line.

It may sound simple enough, but actually playing through it is anything but. The Spelunker can jump on some enemies and take them out with a whip, and he has a replenishable supply of ropes and bombs. Ropes can be set up to climb to out of reach places, while bombs can destroy large chunks of rock that may be in the Spelunker’s way (all of the environments are entirely destructible). Additionally, you can buy other upgrades and weapons from shopkeepers found throughout the levels.

Here’s where things get really tricky. Every level is randomly generated, meaning you never quite know what’s coming next. The Spelunker only has so much health, and the only way to replenish it is to find a damsel hidden on a stage and carry her to the exit. But the real dangers are the one-hit kill booby traps, of which there are aplenty. The worst part is that every time you die, you have to start over from the very beginning! There are no continues, no extra lives, nothing.

The game is actually really short, so those who dedicate their time to the game can learn all the game’s traps and layouts, even with the randomly generated levels. Some speedrunners can beat the game in just a few short minutes, and my hat goes off to them. 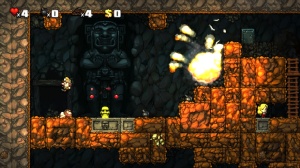 The problem with Spelunky is that, unless you are among such dedicated people, you may find the game more frustrating than fun. Spelunky never eases players into things, instead it throws them into really difficult levels from the get-go. There’s no learning curve like in other difficult games such as Dark Souls or the newer Donkey Kong Country games (aside from some brief tutorials, but those merely show you the mechanics, and don’t give you time to prepare for what’s ahead). You’ll repeatedly die and have to start over, without knowing how the levels will play out the next time.

What makes it all worse is the way Spelunker controls. Now, the controls are far from broken, but the jumping feels too stiff, and running feels too slippery. Again, it could be a lot worse, but for a game that’s already quite difficult, the control quirks don’t exactly make things less frustrating.

The game features local multiplayer with co-op and death matches. Between the two, co-op will probably be the more fun option, provided you’re playing with someone who’s on equal footing with you in terms of Spelunky experience. The death matches are frankly just too chaotic, with most rounds lasting only a few brief seconds before a winner is declared (or isn’t, as it’s very much possible for all combatants to die).

I don’t want to sound like I’m simply writing off Spelunky. The game has many novel ideas working for it. The level design is actually really clever, and their randomness, along with the various weapons and items you can purchase, give the game a sense of variety and surprise despite its short length. There’s a good sense of creative freedom with how you want to reach every level’s exit (you can be more crafty, or simply blast your way through if you use your bombs wisely). The character designs are cute, with the Spelunker looking like a cross between Indiana Jones and Super Mario. The graphics have a nice balance between modern and retro, and the soundtrack is reminiscent of the old Sonic the Hedgehog games, albeit with an appropriately slower pace.

Spelunky is a good game, it just isn’t a good game for everyone. It caters to a very specific audience, and if you don’t have the patience for it, you might not even be able to appreciate its qualities.