Yes, I am extremely late in writing this. You may think “why bother making a top 10 films of 2016 list by this point? We’re more than five months into 2017 now!” Well, this is my site and I can do what I want on it. That’s reason enough for me.

In all serious though, I intended to write this some time ago, but there were a number of 2016 films that I had wanted to see that I didn’t get around to until much later. Now that I’ve seen them, I can write this with a deeper knowledge of 2016 films.

Of course, keep in mind that this is my own personal list. Ergo, my personal taste will probably make this look wildly different than many other lists. For example, I like movies that actually gain an audience and make money  a lot more than professional award committees seem to. Sure, I’m open to liking any movie if I think it’s good (hell, sometimes I like movies that I know are bad, if they provide enough entertainment). But I’m not going to place some critically acclaimed, artsy films just to make me look more “legit.” I like what I like, so that’s what’s going to be here.

As a whole, I don’t think 2016 was as good of a year for movies as 2015, but it still provided some gems. These are said gems that I really liked.

But first, I’d like to give a shoutout to both Dr. Strange and The Founder, both of which I greatly enjoyed and wish I could place on here as well. But top 10 is the tradition, and it’s a perfect number that appeases my OCD. So they have to settle for runners-up spots. Still, one’s a great superhero movie that changes things up by actually including magic (instead of skipping around it like Thor) held together by Benedict Cumberbatch and Mads Mikkelsen. The other is a surprisingly engaging look into the origins of the McDonald’s fast-food restaurant chain, lead by a great performance by Michael Keaton.

END_OF_DOCUMENT_TOKEN_TO_BE_REPLACED

Your Name is the 2016 anime film by Makoto Shinkai that took the world by storm. Shinkai’s previous films were successful, but Your Name was on another level entirely, becoming the highest-grossing anime film worldwide, and the fourth highest-grossing film in Japanese history, behind only Disney’s Frozen, James Cameron’s Titanic, and Hayao Miyazaki’s Spirited Away. The great news is that Your Name is that rare kind of film whose quality actually warrants it’s rabid success.

The film tells the story of two Japanese high school students: Mitsuha Miyazumi and Taki Tachibana. Taki is a boy living in Tokyo who works at an Italian restaurant. He’s polite and kind-hearted, but has trouble expressing himself. Mitsuha is a small-town girl, the daughter of the mayor, who is tired of both her small-town life and being in her father’s shadow.

As the movie begins, however, neither Mitsuha or Taki are themselves, as they’ve each awakened in the other’s body.

At first, neither Taki nor Mitsuha know what to do in the situation, and think it’s some kind of dream. But as the day goes on, they manage to grow more accustomed to the bizarre situation, and even begin to enjoy it. The next day, both teenagers return to their respective bodies, but the strange phenomenon continues to happen every so often (a few days a week, they mention in one scene).

From here, Taki and Mitsuha – who were previously unaware of each other’s existence – begin to learn more about each other. They each manage to get a hold of the other’s cellphone number, with which they inform each other of their respective schedules, and set a list of guidelines for how to interact with their respective friends and family (which becomes increasingly important, as their memories of the other begin to disappear once they return to their own bodies).

Some liberties are taken by the two, of course, with Mitsuha improving Taki’s social life and setting up a date with his crush, while Taki turns Mitsuha into the most popular girl in her school.

Things aren’t all fun and games, however, as a revelation of an impending natural disaster threatens Mitsuha’s entire town, leaving the two high schoolers to try and figure out a means to utilize their unique situation to save the town and everyone in it.

What’s really striking about this story is that, although it does follow a number of traditions and obvious cliches of anime and high school dramas, it manages to make it all feel original and fresh thanks to its creative setup (which is something of a cross between Groundhog Day and Freaky Friday) as well as its well-written characters.

The fact that each of the two leading characters are often each other means we get to know one character through the other, which makes the relationship between the two something truly unique. By the end of it all, Taki and Mitsuha become two of the most believable and likable characters in animation.

Your Name also boasts a refreshing combination of genres, the type of which usually only seems to happen in smart animated features like this. It can get serious and dramatic, and is a fun high school movie in its own right. But it’s also strangely and beautifully romantic, and can be incredibly funny (the first two things Taki notices when he inhabits Mitsuha’s body are the exact two things a young man would notice if he switched bodies with a young woman). 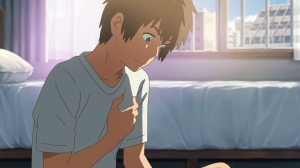 What really surprised me about Your Name is how well it captures all these various emotions. Anime films are frequently interesting, but often at the expense of emotional resonance. A lot of anime films introduce audiences to intriguing worlds, and their efforts at more philosophical storytelling definitely feel different than what we usually see in western animation. But the world-building is often convoluted, and the philosophical elements can feel forced, which gets in the way of the story and characters resonating with their audiences. It seems only Studio Ghibli consistently finds the right balance of these elements.

Thankfully, Your Name gets it right! I’d even say that it successfully evokes its emotion better than any anime film outside of Studio Ghibli that I’ve ever seen. It’s sweet, fun, funny, sad and touching.

Another aspect of Your Name that I really appreciated is that the film never feels the need to explain why any of the body-switching is happening. There are a few hinted possibilities (a passing meteorite, a cultural ritual Mitsuha partakes in), but nothing that overtly explains it. Your Name wisely trusts its audience to be able to enjoy the story without needing to have the finer details spoon-fed to them.

Your Name is also a strikingly beautiful film, with some of the most outstanding animation I’ve ever seen. The character designs aren’t the most original out there, but their movements are as fluid and believable as any animated character. The backgrounds are stunning, and there’s a wonderful sense of detail in everything going on on-screen. The visuals are complimented by a similarly beautiful soundtrack, which captures the range of emotions of the film, without ever becoming overbearing.

The entire picture is just an aesthetic wonder. It’s a film you can’t help but be absorbed in, with its visual and audio beauty ultimately only complimenting what is a really heartfelt story. 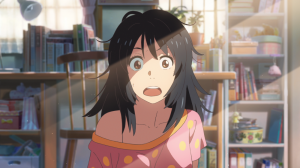 2016 was a great year for animated features: Disney had the one-two punch of Zootopia and Moana, Pixar’s Finding Dory was a surprisingly good sequel, and Kubo and the Two Strings was a stop-motion wonder from Laika. Yet even with all that competition, Your Name ultimately comes out on top as the best animated feature 2016 had to offer.

I went into Your Name knowing of the success it’s had, and tried to keep my expectations at bay as to not end up disappointed. But Your Name ended up being that rare kind of feature that – once the last credit rolled and I could only then get out of my seat – left me feeling overjoyed and grateful for having seen it.

Your Name is simply a wonderful film.