If ever there were a movie that could be described as indescribable, surely it’s Spirited Away. Hayao Miyazaki’s animated masterpiece is a work of ineffable imagination. Its storytelling and inventiveness are as spectacular as they are unique.

When it was released in Japan in 2001, Spirited Away broke many records, and ranks as the highest grossing film in Japan’s history to this day. When Disney brought it stateside in 2002, it managed to finally get Miyazaki some worldwide recognition, not to mention an Oscar and many other accolades. Spirited Away has since become regarded as a classic of animated cinema, and its praise couldn’t be more deserved.

Spirited Away tells the story of Chihiro, a ten-year old girl in the middle of moving to a new home with her mother and father. Chihiro is apathetic, somewhat spoiled, and bitter about her family’s move.

On their way to their new home, Chihiro’s father makes a wrong turn, and the family ends up at the entrance to a mysterious tunnel, which leads to what appears to be an abandoned theme park. The tunnel and park turn out to be a portal to another world. Not a portal in the traditional fantasy sense, as they show no inherent otherworldly attributes. But once night falls, Chihiro finds herself surrounded by ghosts and monsters, her parents – who were quick to consume the many delicacies found in one of the park’s restaurants – are transformed into pigs, and the tunnel that lead her to this world is now a distant speck across an ocean.

Frightened and confused, Chihiro manages to find a friend in a mysterious boy named Haku, who informs her that if she hopes to survive in this new world of gods and monsters and save her parents, she must find employment at a nearby bathhouse, which is ruled by the witch Yubaba. But working at the bathhouse won’t be so easy, as employment comes at the cost of surrendering one’s name to Yubaba. Should Chihiro (now dubbed “Sen” by the witch) completely forget her name, she will never return to the human world.

The bathhouse, perhaps the most alive location in all of cinema, is where most of the film takes place. It is a place where deities and specters visit for some relaxation and replenishment. The designs for these countless spirits are all richly imaginative, whether they get a decent amount of screen time or are simply background characters. The creatures of Spirited Away are so wondrous and weird they make the denizens of the Mos Eisley Cantina look mundane.

Such wonderfully designed creatures are the least of Spirited Away’s triumphs, however. There is a profoundness and depth within Spirited Away’s storytelling that ascends it to the highest level of artistry.

Each character Chihiro comes across has something of a story to tell, and nearly every scene works as an allegory with double and triple meanings, sometimes even more. There isn’t a moment in Spirited Away that doesn’t present audience with much more than what’s immediately on-screen.

Every character within the bathhouse is wonderfully realized: Haku becomes something of a guardian angel to Chihiro, but also has a loyalty to Yubaba that makes his motives ambiguous. Kamaji, an elderly man with six extendable arms who bears a resemblance to Dr. Robotnik, is a slave to his job as the bathhouse’s boiler man (he literally sleeps where he works). At first Kamaji appears bitter, but he is won over by Chihiro’s determination. Lin is a young woman who becomes something of Chihiro’s boss, confidant and mentor. Even Yubaba is more than just a villain. Although she’s capable of despicable deeds, Yubaba is also given human and relatable traits as the film progresses. 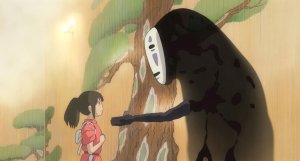 Perhaps the most important of the lot is Noface, a mysterious apparition who is the embodiment of loneliness and despair. Noface – who is according to Miyazaki the film’s deuteragonist – has his own story that becomes as rich and detailed as Chihiro’s, and both characters’ stories intertwine beautifully.

It is of course Chihiro herself who’s at the heart of it all. She is a flawed character; clumsy, whiny, and apathetic. But it’s her flaws that make her character growth all the more powerful, and make her quite possibly the best leading heroine in any animated film.

One of Spirited Away’s greatest strengths is the way it manages to tell its story and bring its characters to life. Very little of what happens in Spirited Away is explicit. Chihiro’s journey is told with a subtle and ethereal grace that’s all its own. It tells only what needs to be told, and leaves the rest of its details to the viewer’s interpretation. 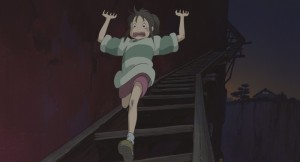 Yet, despite its artistic depth, Spirited Away is also a very fun movie. Hayao Miyazaki has claimed he specifically made the film for 10-year old girls, and yet it’s a film that can appeal to anyone. The characters win us over with their charming personalities and sympathetic qualities, and the film sprinkles in a good amount of humor and heart. It’s as entertaining as it is deep, and a real treat for audiences of any age. 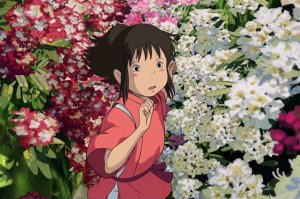 To top it all off, Spirited Away boasts some of the most gorgeous animation ever seen. All of the character designs leave an impression. There’s a painstaking attention to detail in all of their actions and movements. Even the background characters are always doing something, with each one acting differently to the others. The backgrounds are consistently stunning throughout, with every last frame being a captivating work of art.

Spirited Away, like most of Miyazaki’s works, was scored by Joe Hisaishi, and its soundtrack remains one of his finest compositions. It is (quite appropriately) the most “Japanese” of all the scores of Miyazaki’s films, and many of its tracks are some of the most beautiful and soothing I’ve heard in a movie.

Rest assured that Disney once again did a fine job with the dubbing. Though this was one of Disney’s earlier efforts in dubbing a Miyazaki film, and thus there weren’t as many “big name” actors jumping at the chance to voice a character like there would be in later Miyazaki films, the quality of the dub is just as good as any of them.

Many actors who previously voiced Disney characters can be heard (such as David Ogden Stiers, a Disney veteran, voicing Kamaji, and Pixar’s “lucky charm” John Ratzenberger voicing one of the employees of the bathhouse, complete with his famous ad-libbed one-liners). Daveigh Chase, Jason Marsden and the late Suzanne Pleshette voice Chihiro, Haku and Yubaba, respectively, and help give life to the characters (Plashette’s cackling vocals are a particular highlight). Simply put, you can’t go wrong watching Spirited Away in its original Japanese track or the English dub.

Since its release, Spirited Away has had a profound impact on animated films the world over, with the likes of Pixar aiming to give their films a richer artistic depth in the years that followed, to name the most prominent example. And yet, despite how far animated films have come in the decade and a half since Spirited Away’s time, none of them have truly replicated its magic. No matter how many times I’ve watched it, I’m just as enchanted and enthralled as I’ve ever been by it. It’s an ineffable work that is entirely its own, and quite likely the most imaginative film ever made.

Its title couldn’t be more appropriate. After watching Spirited Away, you may feel like you’re very much in Chihiro’s shoes, and have been spirited away yourself.