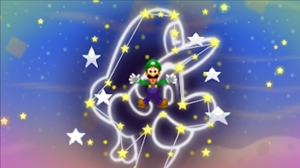 Mario and Luigi’s fourth handheld RPG outing together sees things go back to basics. After being joined by their baby selves in Partners in Time and allied with the King Koopa in Bowser’s Inside Story, Mario & Luigi are back on their own. Though it’s Luigi who gets special attention this time around.

Dream Team sees the mustachioed brothers traveling to the land of Pi’illo Island for a vacation, only to find out the bat king Antasma has been trapping the island’s denizens in stone pillows. In order to save the day, Mario must enter the dream world through Luigi’s dreams via magic pillow, ally with Luigi’s dream version of himself, and rescue the Pi’illow folk. It’s one of the silliest plots yet in the series, which makes for some humorous writing and plenty of Luigi-centric sight gags.

The brothers’ actions are still controlled individually, with different button presses allowing Mario and Luigi to jump, defend and attack enemies, as well as interact with their environment. The game takes the usual top-down perspective in the outside world, but once Mario enters Luigi’s dreamscape, it turns into something closer to a sidescroller.

The dream world features Luiginary Works, strange happenings in Luigi’s subconscience that Dreamy Luigi can interact with. These Luiginary Works serve as a means to add various touch 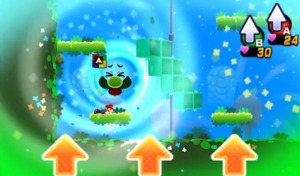 screen controls and new play styles to the game. They certainly help the dream sequences separate themselves from the rest of the game, as does the battle system.

In the outside world, battles remain largely as they’ve been in the past three games. Mario and Luigi have jumps and hammers at their disposal, with special moves (referred to as “Bros. Attacks”) using input from both Mario brothers. The dream battles, by contrast, involve Mario fighting alone, until he uses special moves (here referred to as Luiginary Attacks) which involve an army of Luigis forming various shapes, like skyscrapers and boulders, that require more unique uses of the 3DS (such as motion controls or the touch screen) to do maximum damage.

The Dream sequences are the highlight of the game, as they house more creative twists in gameplay, whereas anything that takes place outside of Luigi’s dreams – which, unfortunately, is the brunt of the game – feels like it’s running on the same ideas as the previous three Mario & Luigi titles. That’s not to say that the non-dream segments don’t provide any fun, but after the wildly inventive Bowser’s Inside Story – which seemed to throw new ideas and gameplay around every corner – Dream Team feels relatively restrained.

Dream Team is an enjoyable game when taken on its own merits, with fun gameplay and a wonderful

musical score, and the character animations are more lively than ever. But in some notable ways it feels like a step down from its predecessor: The writing can be hilarious, but you’ll miss Fawful and the like. The Luiginary bits are fun and funny, but never match up to the sheer entertainment of controlling Bowser. The dream concept is a good setup, but fails to match the creative promise of that premise.

Dream Team is another solid RPG in the Mario canon, and certainly more worth the time than Paper Mario: Sticker Star, its 3DS sibling, but knowing what came before, you know Mario & Luigi could have dreamed bigger.