Shovel Knight remains not only one of the best games from the current console generation, but very likely the best indie game I’ve ever played. Taking the foundations of many of the best 8-bit games and creating its own identity through them, Shovel Knight is at once a retro charmer and a modern classic. It’s no surprise that it’s become one of the most successful indie releases in the industry.

Plague of Shadows is Shovel Knight’s first of three promised add-on adventures, and places boss enemy Plague Knight in the starring role. Although it borrows many of the same levels and elements as the core game, Plague of Shadow’s new character means new gameplay and an all-new story are at play. And it all comes as something of a steal, as Plague of Shadows is an automatically added expansion to Shovel Knight for anyone who owns the game, as opposed to paid DLC.

You would be forgiven for thinking Plague of Shadows is nothing more than Shovel Knight with a character swap from first glance. It uses the same world map, the same levels, and the same bosses (though Shovel Knight is now fought in Plague Knight’s domain, with the game keeping continuity with the outcome of the battle in a fun way). The destructible checkpoints return, as do all the levels’ obstacles and gimmicks. But Plague Knight is a vastly different character than Shovel Knight, ultimately turning Plague of Shadows into a new experience within this treaded path.

Whereas Shovel Knight was confined to a grounded and jump attack, along with the various items he picked up along his journey, Plague Knight has a more versatile and customizable means of attack. 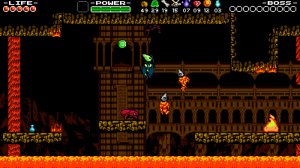 Plague Knight’s weapons of choice are bombs. Throughout the game, players can purchase new casings, powders and fuses for Plague Knight’s bombs. Casings determine how the bombs are thrown (some are tossed in an arch, while others are rolled or bounced on the ground), powders determine what happens when the bombs explode (one sends flames in both directions of Plague Knight, for example, while another works as a homing missile), and fuses determine how long it takes for a bomb to explode.

Additionally, Plague Knight is not nearly the jumper that Shovel Knight was, being able to double jump, but with both jumps not equalling the distance of even one of Shovel Knight’s. To compensate, Plague Knight can also gain “Burst,” which are moves performed by holding and releasing the attack button, which give Plague Knight an added boost in his jumps.

The relics that Shovel Knight collected in his adventure can still be found, but instead of being used as their own weapons, Plague Knight can trade them in to a merchant in exchange for Arcana, which basically function like Shovel Knight’s relics and use magic points, but they are an entirely new library of moves.

At any given time, you can go to the character menu and customize which casings, powders, fuses, Bursts and Arcana that Plague Knight is using, giving the game a great sense of variety. You’ll probably find a particular setup that suits your liking, but you will still need to change things up every here and there when certain situations are better dealt with different moves.

The vastly different approach to Plague Knight’s gameplay makes the experience feel brand new again. Though on the downside, you may find that some of the platforming has become considerably more difficult, due to Plague Knights purposefully awkward jumping. And repeatedly holding the attack button to perform Bursts can feel a tad cumbersome (sometimes you’ll have to be careful not to overshot your jumps with a Burst, making them as risky as they are helpful). 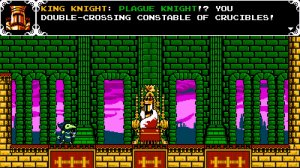 Conversely, the boss fights now feel a great deal easier, as you can continuously bombard them with bombs thrown from the air ground (of the game’s returning bosses, only Propeller Knight gave me any notable challenge). The difficulty is therefor not as consistent as that of the original game, and it’s easy to see many players preferring Shovel Knight’s balance over Plague Knight’s on-again, off-again difficulty.

Plague of Shadows introduces a whole new plot, which takes place concurrently with Shovel Knight’s story (you can even spot some of Shovel Knight’s exploits at various moments throughout the game).

Plague Knight, as it turns out, is a traitor to the knights of the Order of No Quarter, as he plans on stealing the “essence” of each of his fellow knights – as well as that of Shovel Knight and the Enchantress – in order to create a potion that will grant him any one wish.

He is not allowed into the towns from the original game (most the townsfolk fear him), so instead Plague Knight takes refuge in a secret lab with various tertiary and background characters from Shovel Knight, the most notable of which being Mona the witch, who serves as Plague Knight’s assistant and most trusted ally.

The game does a mostly good job at turning a boss enemy into a more fleshed-out character, though Plague Knight’s snide personality isn’t as immediately likable as Shovel Knight’s chivalric charms. The story itself has a similarly effective simplicity to the original game, and it connects with Shovel Knight’s plot in some amusing ways. Though some of the optional bosses have some pretty goofy reasons for battling Plague Knight, which makes them feel tacked on to this adventure out of obligation, instead of giving them a meaningful purpose to return.

This expansion provides a secondary challenge in finding all of the hidden Cipher Coins, which are used to purchase the customizable moves from Mona. The Cipher Coins are usually obvious to spot (though some are hidden in walls), but it will take quite a bit of platforming skill to collect them all.

If Shovel Knight is one of the better modern games, it is only fitting that Plague of Shadows is one of the better DLC packages out there as well. It doesn’t quite match Shovel Knight’s campaign due to the more fluctuating difficulty, and some people may simply not find Plague Knight’s sense of control very appealing. But the simple fact that this is a DLC campaign that feels like a worthy successor to the outstanding original is a massive accomplishment in of itself. And it’s free. What a steal.

One thought on “Shovel Knight: Plague of Shadows Review”