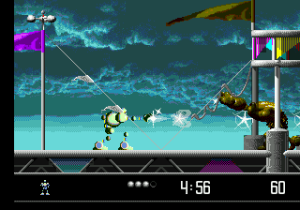 In 1995, the 16-bit generation was winding down. The Sony Playstation and Sega Saturn were released, and the Nintendo 64 was right around the corner. By this point, Nintendo had the 16-bit wars against the Sega Genesis all but won, thanks in no small part to the huge sales numbers of Donkey Kong Country in 1994. Still, Sega wanted the Genesis to gain one final edge, and in one of the system’s last acts against the SNES, Sega published the title Vectorman, which was to be Sega’s answer to Donkey Kong Country.

Like DKC, Vectorman used pre-rendered graphics, to give the game a more state-of-the-art, three-dimensional look, and to push the Genesis beyond its graphical limits. But as was the tradition with Sega back in the day, the cuter Nintendo characters of Donkey Kong Country were swapped with a more “cool” and “edgy” setting.

Vectorman is a robot. Or, more accurately, an Orbot, a robot comprised of orbs. The story is set in a future where mankind has left a polluted Earth in a mission to colonize other planets. While the humans are away, the Orbots are left to clean up the planet. One of the elite Orbots, Raster, watches Earth through a planet-wide computer network. Unfortunately, Raster is accidentally merged with a working nuclear missile due to an error, and becomes the maniacal Warhead. Using his computer network, Warhead plans a hostile takeover of Earth, and begins controlling the other Orbots. Thankfully, one clean-up Orbot, Vectorman, was in space during all of this, and upon returning to Earth, takes it upon himself to stop Warhead and set things right.

Basically, it’s like Wall-E with guns and explosions. Silly as it may sound, Vectorman actually ends up being a pretty fun game.

Vectorman is easy enough to control. He can run, jump and shoot in various directions. The brunt of the game’s sixteen stages are traditional action-platforming fare, with Vectorman blasting through enemies as he makes his way to the end of the stages, some of which feature a boss fight at the end, and some that don’t. 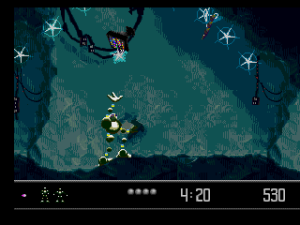 Stages are littered with TV monitors which, when destroyed, give Vectorman items or power-ups. The TVs can provide additional sparks – much like the countless sparks that litter the stages – which add to your point total, additional health, upgrades to your gun (such as rapid-fire or a shotgun-like burst), or even temporary transformations.

Unfortunately, the transformations are a bit disappointing. Although in concept it may sound intriguing to turn Vectorman into a bomb, drill, or a fish in order to find alternate routes through levels, the execution is a little bland. The transformations are incredibly short-lived, and only appear in TVs that are exceptionally close to where these transformations are to be used. It would have added to the fun if you could travel in these alternate forms for a bit longer, and for their intended uses to be more cleverly hidden. Instead, you basically know to rush to a nearby weak floor to drill or cracked wall to bomb as soon as you transform.

The other big complaint comes in the form of the stages that don’t follow the traditional run-and-gun format. While it’s nice that the game attempted a decent amount of variety, Vectorman never gives properly segues into these stages.

The second stage of the game, for example, abandons the platforming in favor of a top-down rail-shooter, where Vectorman is riding on a train as a giant robot tries to destroy the tracks. Not only do you have to shoot the hands of the giant robot as it grabs the tracks, but you also have to shoot missiles that are coming at you from all sides. It may not sound too out of the ordinary, but this all happens pretty much immediately after the end of the first stage.

Let’s compare this to Donkey Kong Country’s mine cart stages. In DKC, the mine cart stages begin like any other in the game, and players have to jump into a mine cart themselves before the gameplay changes. There’s a proper transition that lets the player know what’s coming. But here, you go from destroying a surprisingly difficult first boss, and then suddenly are thrown into an entire different kind of gameplay setup. If there’s no proper gameplay segue, there needs to be some kind of explanation, otherwise the change is just too sudden and confusing.

Perhaps these sudden changes wouldn’t be quite as bad, if it weren’t for the game’s often unforgiving difficulty. Now, for the most part, Vectorman is the good kind of difficult, where the challenge lies in the level design and boss fights. But on the more unforgiving side of things, Vectorman only has a small amount of health, and it doesn’t replenish in between stages. I’m not exaggerating when I say I died within seconds of entering the second level, because I only had one hit point left over when I finally managed to beat the first boss.

Similarly, Vectorman only has so many lives, and not a single continue. It’s true you can change the difficulty settings on the title screen (with the settings humorously being labelled “Lame,” “Wicked,” and “insane”), and the easier settings mean Vectorman has a few more hit points and lives while bosses take fewer hits, but finding additional extra lives is still a rare occurrence.

Donkey Kong Country – Vectorman’s supposed rival – was also a difficult game, but it was still decently generous by granting extra lives for every 100 bananas you collected (not to mention it had a save feature). But again, all the collectible objects in Vectorman do is add to your points (and high scores were largely an afterthought by the 16-bit generation). So even with the added bonuses of the easier difficulties, expect to see that game over screen more than a few times.

One other minor complaint is that the levels end far too unceremoniously. In most platformers, there’s some kind of destination at the end of a stage (the flagpoles in Super Mario Bros., or the spinning signs in Sonic the Hedgehog). But here, in the stages that don’t house bosses, they just kind abruptly end once Vectorman reaches a certain point. And in the levels that do have bosses, most of the bosses just kind of show up, with no visual introduction or changes in music. It’s not a big complaint, but it does kind of hurt the presentation. 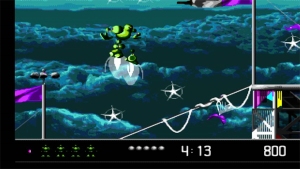 Hopefully I don’t sound too negative towards Vectorman. Because, in the end, Vectorman is a really fun game. The simple run-and-gun action, combined with some sharp level design, make it an enjoyable platformer. And fittingly enough, the game’s pre-rendered graphics still hold up, and give the game a visual vibrancy that often rivals that of Donkey Kong Country. The music is similarly appealing, and is something of a marriage between techno dance mixes and more atmospheric pieces which, again, can be somewhat reminiscent of Donkey Kong Country (though the soundtrack never reaches the same heights of DKC, though that would be a hefty task that few games could accomplish).

So Vectorman is flawed, but it was a fun and largely overlooked game that probably deserved more. It only ever saw one sequel (also on Sega Genesis), and though a third, 3D installment was planned at one point, it was cancelled, and Vectorman has been drifting in limbo ever since. That’s a real shame, because Vectorman could have been one of Sega’s premiere franchises, right alongside Sonic the Hedgehog himself.