*Review based on Red Dead Redemption 2’s single player campaign. A separate review based on the game’s online mode will follow sometime in the future*

I don’t think I’ve ever played a video game as big as Red Dead Redemption 2. The sheer scope of its world, countless playable activities, and excruciating attention to detail are second to none. Though Red Dead Redemption 2’s ambitions can prove to be a bit of a double-edged sword. Its journey and world-building can feel miraculous at times, but daunting in others. The whole of Red Dead Redemption 2 is a thing of sheer beauty, but its individual pieces can frequently expose its weaknesses on both a creative and technical level. Tedious gameplay elements, bloated objectives, and technical issues eventually do add up to hold back what is otherwise a classic and unforgettable gaming experience.

Set in 1899, Red Dead Redemption 2 is a prequel to its beloved 2010 predecessor. Players take on the role of Arthur Morgan, a member of the Van Der Linde gang (named after its leader, Dutch Van Der Linde), who happen to be going through a rough time after a big heist went horribly wrong. Members of the gang, authorities, and innocent civilians were killed when the job went awry, leading the Van Der Linde gang to go into hiding, and Arthur to begin questioning their future.

Dutch and the gang are on the run from the law, trying to find a means to survive both nature and civilization. Dutch believes one last successful job can lead the gang to prosperity, but that’s easier said than done when Pinkertons, wealthy oil magnate Leviticus Cornwall, and rival gangs such as the O’Driscals are out for the blood of the Van Der Linde gang. In Arthur’s shoes, it’s up to the player to help the Van Der Linde gang get back on its feet, in hopes of a better future.

That’s the basic setup of everything, but as the game progresses, Red Dead Redemption 2 turns into a pretty compelling, character-driven narrative, complimented by some of the best voice acting I’ve ever heard in a video game.

As the game begins, the Van Der Linde gang is low on resources, so naturally the gang has to start small to build itself back up. As Arthur Morgan, players can simply progress through the plot – completing necessary objectives to push the story forward – or they can partake in seemingly countless endeavors across the game’s vast open world.

Unlike most open world games, there’s never a moment when Red Dead Redemption 2 feels lifeless. Every inch of the game feels packed with things to do, whether big or small. You can ignore the story entirely and just get lost in hunting wild animals for meat, robbing trains, playing poker, or making new discoveries in the game’s world. You really have to hand it to Rockstar, they left no stone unturned in regards to making their interpretation of the Wild West feel like a living, breathing world. There is so much to do in Red Dead Redemption 2, in fact, that it would be impossible for me to detail them all without this review turning into an instruction manual.

Red Dead Redemption 2 features a morality system, which will change Aurthur’s moral alignment (and his interactions with others) depending on the choices the player makes. So even though Read Dead 2 gives players the freedom to go about Authur’s life and journey as they see fit, there are consequences for your actions. Killing random passersby and looting them will, of course, take away Aurthur’s morality. Should anyone else notice evidence of Aurthur’s crimes, a bounty will be placed on the player’s head. And whenever bounty hunters are close by ready to collect said bounty, certain game elements (including side quests) become unavailable. Conversely, if you happen to come across people in need during your journey (whether it be a blind beggar or a victim of a snake bite requesting Arthur to suck out the venom), lending them a helping hand will reward you at a later time (in a few instances, the people I helped later appeared in towns, and offered to buy me whatever item or weapon my heart desired). Although Rockstar games have a reputation of indulging in deviant behavior (and that can even be true here), Read Dead Redemption 2 bucks that reputation with an emphasis on every action having a consequence.

As stated, Red Dead Redemption 2 is a massive game, filled to the brim with content. On a technical level, the attention to detail and the amount of things to do are unrivaled. Though there is a downside to this insane level of intricacy, with the game sometimes being unable to handle itself, leading to some unfortunate technical issues.

The loading times can be extensive, but that’s fair, given everything the game has to load at any one time. Less tolerable however are the glitches you’re likely to run into across Arthur’s journey. During my playthrough, I encountered more than my share: In one instance, I had to restart a tutorial after enemies spawned on top of the camp I was setting up, who then proceeded to disappear and reappear. For another example, I even had one of my bounties disappear into thin air just as I was taking him in to the local sheriff. Thankfully, I never encountered anything game-breaking, but these issues were big enough and frequent enough to lead to more than a few moments of frustration.

Another aspect of Red Dead Redemption 2 that may end up feeling like a double-edged sword is its emphasis on realism. Now, again, the level of detail is truly stunning, and that’s reflected in the game’s sense of realism. But these realistic elements can also border on tedious.

Arthur’s stats are divided into three categories: health, stamina and deadeye. Health is self-explanatory, and serves as Arthur’s hitpoints. Stamina dictates how long Arthur can run or swim without getting exhausted. Deadeye grants players the ability to slow down time during gunfights, allowing you to mark your targets and get easy shots in the process.

It sounds simple enough, and aside from the addition of deadeye, it brings to mind Breath of the Wild. But while Breath of the Wild streamlined things by simply having certain items recover (or boost) Link’s health and stamina, Red Dead Redemption 2 adds an extra layer to the equation in the form of cores. Cores more or less serve as the base stats of Arthur’s three attributes, and can be leveled up throughout the game to increase the maximum amount of health, stamina and deadeye Arthur can possess.

The downside to this is that the cores also deplete if Arthur has ran out of the stats themselves. And the cores require their own items to recover, separate from those used to heal their respective attributes. So you’ll often have to pause whatever you’re doing to cycle through menus (which thankfully is rather easy in itself, adopting the “wheel menus” originated by Secret of Mana), and use a myriad of different items just to get back to your standard. You won’t believe how many times I got killed in gunfights simply because I couldn’t keep up with all my stats, and kept getting riddled with bullets as Arthur stopped to perform the required animation for using each item.

Yes, Rockstar’s efforts in making the game realistic are admirable, but it also means keeping Arthur in top shape – as well as putting up with every little animation (you can’t simply grab an item by pressing a button, but have to wait for Arthur to crouch and pick up the item himself) – may try the patience of some gamers.

Unfortunately, there is one other big drawback to Red Dead Redemption 2. I mentioned that the story of the game is well written, and I mean it. The character development (particularly that of Dutch Van Der Linde) is truly captivating. But – as is a bad habit of modern games – the story can become dragged out with padding on a few occasions. With how massive of a game Red Dead Redemption 2 already is, and the countless things you can do at any given time at any given place, it really seems unnecessary for the main plot to be as long as it is. The story could have been trimmed down a good number of hours and not taken away its impact, and left the optional elements to fill out the game’s content.

In the most blatant example of padding in gaming since Uncharted 3’s cruise ship sequence, the entire fifth chapter of Red Dead Redemption 2’s story feels completely unnecessary. The plot would have worked just fine without it. What’s worse is that this chapter is the one instance in the game where you aren’t free to do as you please, as it forces the player to do what it wants. As great as the rest of Red Dead Redemption 2 is, the game’s fifth chapter brings its momentum to a dead stop. 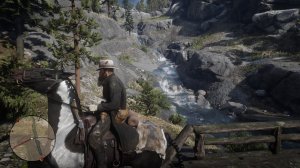 Still, it can’t be stated enough how much Red Dead 2 gets right. On the visual front, it’s a non-stop spectacle. The character models are some of the most believable and realistic I’ve ever seen (with only Uncharted 4 and 2018’s God of War matching it in those areas). And the scenery is absolutely breathtaking. Aside from actually stepping outside and experiencing nature in real life, you probably couldn’t ask for more beautiful natural environments.

Complimenting these beautiful visuals is an absolutely terrific musical score that rivals any movie western soundtrack. There were countless moments in my playthrough where the score not only set the mood for what was happening in game, but really pulled me into the moments themselves. Rarely have I been so involved in what was happening in a game as I was riding on horseback with Dutch and the gang, dodging gunfire and riding to safety as Woody Jackson’s epic score flooded my ears.

Adding even more to these audial pleasures is some stellar sound work, which ranks as some of the best you could hope to hear outside of FromSoftware. Red Dead 2 is – like FromSoftware’s Souls series – one of those titles where every last sound helps create the emersion of its world.

Another fun aspect of Red Dead 2 is that it has a pretty good sense of humor. Though the main story plays things straight for the most part (save for a now infamous drinking binge segment), there are many side quests and occurrences in the wild that frequently lighten the mood. Though the main game stays true to its American Wild West setting, the optional content will see Arthur encounter U.F.Os, vampires, robots, and many other oddities that might otherwise feel out of place. It’s actually a pretty effective and unique example of a game taking itself seriously in terms of its story, but also knowing when to take a break and just have a good time.

Red Dead Redemption 2 has it’s issues. But while those same issues may break a lesser game, Red Dead 2 is so full of life and surprises that whatever drawbacks it does have suddenly seem a lot smaller amidst its campaign and open world. In terms of sheer scope and ambition, Red Dead Redemption 2 is nothing short of peerless.