In 2015, a small development studio called Playtonic Games – comprised of several former members of Rare – revealed Yooka-Laylee through Kickstarter. Yooka-Laylee was a 3D platformer that served as a ‘spiritual successor’ to the Banjo-Kazooie games, which are still seen as some of Rare’s finest achievements, and more than likely the only only 3D platformers not called Mario that genuinely compare to the Italian plumber’s fabled adventures. With the creators of such a beloved series crafting its spiritual follow-up, suffice to say Yooka-Laylee’s crowdfunding campaign was a roaring success.

Fast-forward to 2017 to the release of Yooka-Laylee, and the game’s final reception was unfortunately a lot more mixed than the game’s initial success would have suggested. Though it was a solid effort, a number of technical issues and a few outdated elements prevented Yooka-Laylee from reaching its full potential. Though far from a bad game, it wasn’t the second coming of Banjo-Kazooie we all had hoped it would be.

Thankfully, Playtonic didn’t let the disappointing reception hinder them, and in the Summer of 2019 they announced a surprise sequel, Yooka-Laylee and the Impossible Lair, which was released a few months thereafter. Unlike its predecessor, Impossible Lair is a 2D side scrolling platformer akin to Rare’s Donkey Kong Country trilogy on the SNES. Though Playtonic has insisted to not refer to Impossible Lair as a ‘spiritual successor’ to DKC as they did with its predecessor and Banjo-Kazooie as to avoid setting this sequel up for disappointment, it actually is a strong improvement over its predecessor, and a worthy follow-up to the Donkey Kong Country series.

It’s apparent that Playtonic has learned from Yooka-Laylee’s missteps. While we can hope that means their next 3D platformer will be a real winner (especially considering that genre could do with another classic outside of Mario after all these years), Yooka-Laylee and the Impossible Lair is such a strong 2D platformer that it should do away with any skepticisms people may have had towards Playtonic after their maiden voyage, and re-establishes Yooka-Laylee as a viable video game franchise.

Yooka-Laylee and the Impossible Lair sees the return of Yooka the chameleon and Laylee the bat, as well as their enemy Capital B, who is trying to takeover the “Royal Stingdom” of bees with the use of his new bee mind-controlling scepter. To ensure Yooka and Laylee can’t stop him for a second time, Capital B. has constructed the titular Impossible Lair, an insanely difficult platforming stage that will push Yooka and Laylee (and thus, the player) to their limit.

Similar to the DKC games, both characters essentially serve as a hit point. Get hit once, and Laylee flies away (though there are a few seconds where she can be recovered, and should you lose her, you can bring her back by ringing a Laylee bell). Get hit twice, and Yooka dies. Fall down a bottomless pit, and it’s instant defeat.

To survive the Impossible Lair, Queen Phoebee – the matriarch of the Stingdom – can grant the duo of Yooka and Laylee the aid of her royal guard, who provide a shield for the heroic duo, with each royal guard serving as an additional hit point for the shield. But there’s a catch, the royal guard have all been imprisoned by Capital B.

This is where Yooka-Laylee and the Impossible Lair draws some inspiration from The Legend of Zelda: Breath of the Wild. Should the player have the skill/patience, it actually is possible to head straight into the Impossible Lair and, yes, even beat it (though the challenge is so incredibly steep you may have to be crazy to try that). Or you can experience more of the game, rescue the royal guards, and use them to create the shield for Yooka and Laylee. There are forty-eight royal guards in to be found in total, but again, you can attempt the Impossible Lair at any time, no matter how many guards you’ve rescued.

It’s a seemingly simple twist to the genre, but one that ultimately makes for a great change of pace. The concept of the final level being readily available from the start of the game, with the completion of the other stages giving the player more strength to brave said final level, might be the most refreshing twist to the progression of 2D platformers since Super Mario World introduced multiple stage exists and branching paths in its world map. It’s easy to imagine player’s seeking the toughest challenge trying to conquer the Impossible Lair from the get-go, though I’m on the side of the fence that believes a game is best when you experience it to its fullest.

The other big twist Yooka-Laylee and the Impossible Lair brings to 2D platformers is its overworld. Instead of a map screen to select stages, Yooka and Laylee are thrown into a connected world that takes on a top-down, overhead perspective, akin to the 2D Legend of Zelda titles. New stages are found throughout the overworld, and usually require the player to solve a puzzle in order to unlock them. Additionally, each of the game’s twenty stages (not counting the Impossible Lair) features an alternative version, which feels like a more fleshed-out realization of the ‘level expansion’ concept from the first Yooka-Laylee.

While these changes Yooka-Laylee and the Impossible Lair makes to 2D platforming progression are very much appreciated, I must admit most of the game’s drawbacks come from its overworld. Though the idea of unlocking platforming levels in a Zelda-style overworld is a great concept, the puzzles found in said overworld can sometimes be a bit cryptic, and it can often be vague as to where you’re supposed to go next, which prevents the concept from reaching its full potential. 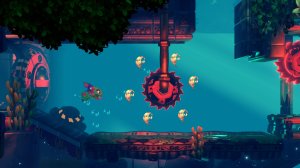 Thankfully, the stages themselves are far better realized. As stated, these are the best side scrolling platformer stages since Tropical Freeze, with levels constantly introducing new gameplay elements into the mix, and the alternate forms of each stage providing even more variety. One stage may get flooded in its alternate form, while another gets flipped on its side. One stage gets frozen over, while a conveyor belt-themed stage will move in reverse the second time around. The twenty proper stages – and their alternate forms – all feel distinct from one another, feel lengthy without ever overstaying their welcome, and are consistently creative.

Quills return as the equivalent of Mario’s coins or Banjo’s music notes (or I suppose most accurately in this case, Donkey Kong’s bananas). Also returning are the Tonics from the first Yooka-Laylee. Quills are found all throughout the stages and overworld, while Tonics are found exclusively in the overworld (sometimes very well hidden), and often require puzzle-solving and Yooka’Laylee’s acrobatics to find.

Once the player finds a Tonic, they use the quills they’ve found to purchase them. The player can equip up to three Tonics at a time. You can unlock the ability to equip four Tonics, but the downside to this is that the process of unlocking the fourth Tonic slot will take you towards the 100% completion mark, and you may wonder why you need that additional Tonic when the game is that close to being finished.

The Tonics provide new twists to the gameplay, or simply change the aesthetics of the game itself. The cosmetic Tonics might change Yooka and Laylee themselves (like giving Yooka a comically oversized head, or making both members of the duo silhouetted), or change the visuals of the stages themselves (such as comic book graphics or heavily pixelated filters). The gameplay Tonics can either help the heroic duo (like giving Yooka more time to reclaim Laylee after she flies away), or hinder them (such as giving enemies an additional hitpoint or reversing the player’s controls).

You may wonder why you would want to equip Tonics to hinder Yooka and Laylee, other than to provide an extra challenge for those looking for it. There’s actually a valid reason for it: the Tonics that make the game more difficult will add to the quills you gain during a stage, while the beneficial Tonics will subtract from them (the cosmetic Tonics thankfully don’t alter your quill count at the end of a level). Again, it’s a fun twist on the traditions of the genre.

Whether or not you like to play with visual-altering Tonics or not, Yooka-Laylee and the Impossible Lair is quite the aesthetic treat. The graphics look as smooth as the first game, but likely due to the simpler 2D setting, it doesn’t suffer from the same technical blips. The levels look great and the backgrounds are lovingly detailed. It’s just a beautiful game to look at (though I must admit some of the cosmetic Tonics could be a little eye-straining for me).

Like its predecessor and the DKC titles its emulating, Yooka-Laylee and the Impossible Lair also features a top notch soundtrack. Banjo-Kazooie composer Grant Kirkhope provided the overworld theme, while fittingly enough, Donkey Kong Country composer David Wise created a number of tunes for the game’s stages. It’s a lovely, atmospheric soundtrack, with the David Wise pieces sounding like a direct follow-up to the composer’s work on Tropical Freeze.

The game as a whole feels like it’s aiming to be a follow-up to Tropical Freeze in a gaming landscape that’s desperately starved of one. Though it undoubtedly follows the rulebook that many of Playtonic’s staffers themselves created with the SNES Donkey Kong Country titles, Yooka-Laylee and the Impossible Lair feels every bit as much a love letter to Retro Studios’ second Donkey Kong offering. It’s only fitting then that Yooka-Laylee and the Impossible Lair is the first 2D platformer to come around since Tropical Freeze that can rightfully be compared to it. That in itself is one hell of an achievement.

2 thoughts on “Yooka-Laylee and the Impossible Lair Review”