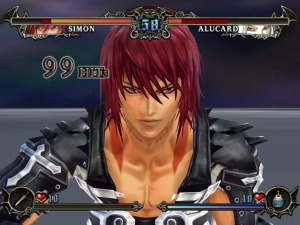 Castlevania is one of the most storied franchises in gaming. It began with many memorable sidescrollers on the NES and SNES, before adopting a more explorative, Metroid-inspired style with the masterful Castlevania: Symphony of the Night. Of course, being the big franchise that it is, it was inevitable that Castlevania would also dabble in different genres, though its experimentation with other formulas hasn’t worked nearly as well as other franchises, with a good example of this being Castlevania Judgement, the first fighting game in the Castlevania series, released on the Nintendo Wii in 2009.

The idea of a Castlevania fighter is actually an enticing one, and at first the game looks to have a lot of promise, with graphics that were quite good for the Wii, there’s a nice (if not limited) selection of characters, and an awesome soundtrack that recreates many iconic tunes from the series’ history. But it won’t be long into your first couple of matches that you begin to notice the game’s flaws.

For starters, the game’s primary control scheme involves the Wii Remote and nunchuck, which is no problem on its own, but quickly becomes one with how the game utilizes them, and how it never meshes with the nature of the game itself.

Players move their character using the joystick on the nunchuck attachment, while the buttons on the back are used to block. Meanwhile, the majority of the characters’ moves are performed with motion controls by swinging the Wii remote. The motion controls simply aren’t well implemented, and often times trying to perform a combo only ends up with you swinging the controller around like a madman, with varying results.

Perhaps the motion controls would work better, if your character were automatically focused on your opponent, and if they weren’t coupled with a poor camera system. Unlike a 3D fighter like Soul Calibur, where the characters are always focused on one another, the fighters here move around so freely that oftentimes, when trying to perform a combo, the first move will hit your opponent and then your character will just keep going past them attacking the air, with the camera trying desperately to keep up with your character.

The combination of poorly-implemented controls and camerawork are what ruin the core gameplay. Though players also have the option of using Wii Classic Controllers and GameCube controllers (which are most assuredly better options), they don’t fix the camera and character issues.

With all this said, there are some small, nice touches to the game. At the start of versus matches, for example, players can select a secondary weapon to use in battle, with said weapons also being obtainable within the battlefield, and include the usual secondary items from the series like holy water, crusifixes and throwing knives. It’s a simple but welcome way to pay homage to the series traditions, as is the ability to pick up hearts to build up your power meter within matches.

Sadly, Castlevania Judgement’s respect for its heritage, along with the aforementioned visuals and music (which are, again, quite good), are about as far as the compliments can go. Along with the faults in the core gameplay, there are other aspects of the game that are just disappointing.

Castlevania Judgement has a host of modes in store, but they are nothing out of the ordinary for a fighting game. What’s a bit more peculiar is that the game’s story mode only allows you to play as Simon Belmont or Alucard from the start, with the other twelve characters (including those that are available from the start in other modes) needing to be unlocked.  And once you unlock them, you may even regret what their stories have to offer (Maria’s story – the most infamous of the lot – revolves around her insecurity of the other Castlevania girls having larger bosoms than herself, which feels ridiculously far removed from the nature of Castlevania).

Worse still, the AI in the game is wildly inconsistent in difficulty. I managed to defeat the first opponent in Alucard’s story mode with no problem (at least, no problem outside of the ones innately found in the gameplay). But the second opponent began repeatedly spamming the same combos over than over, with very little breathing room for me to block or fight back.

The idea of a Castlevania fighting game is not one that should have ended up this flawed. It’s easy to see where the potential was in Castlevania: Judgement, but in execution, it stumbles in just about everything but aesthetics and in fan service for the series. Perhaps a better idea for a Castlevania fighter would simply be to make it 2D and to utilize the same kind of fluid controls found in Symphony of the Night. Symphony already utilized moves that were performed like the combos in a fighter, if you put those same controls into the field of a fighting game, and you would have an absolutely incredible fighter.

Instead, Castlevania’s debut in the fighting genre is remembered mainly for its awkward controls and poorly-implemented mechanics. But hey, at least the music’s good.

Back in 1997, video games had transitioned to the third dimension. The emergence of the Sony Playstation and the Nintendo 64 ushered in new ways to play video games, and many deemed 2D game designs to be obsolete. Despite this drastic shift, there was one classic gaming series that remained defiant, Castlevania.

While the likes of Super Mario 64 showed what the new dimension of gaming was capable of, Castlevania proved that there was not only still a place for 2D games, but they could even stand tall against their 3D competitors. Castlevania accomplished this with the remarkable Symphony of the Night.

Symphony of the Night literally begins where Rondo of Blood ended. The game’s very first moment is the final boss from the previous game, with players taking on Count Dracula as Richter Belmont (complete with one of the most gloriously cheesy dialogue exchanges in gaming history). The game then fast-forwards four years later, and Richter Belmont has gone missing.

Alucard, the son of Count Dracula himself, travels to Castlevania in hopes of discovering Richter’s fate, and to destroy the castle for good. Maria, another character from Rondo of Blood, is also searching the castle for Richter. To both Alucard and Maria’s surprise, the castle is more alive than ever, with Dracula’s armies of monsters ready to stop Alucard’s quest.

The plot is simple enough, but considerably more character driven than the Castlevanias that preceded it. Making Alucard the main character gives the game a unique sense of urgency, seeing as defeating Dracula means he must defeat his own father. And while the voice acting is cheesy, it gives the game a kind of campy charm.

Where Symphony of the Night transcends all previous accomplishments of the series, however, is the game design itself. Symphony heavily borrows the foundations of Nintendo’s Super Metroid, setting all of the game’s events within one labyrinthian game world, emphasizing exploration and character progression in a way that wouldn’t be possible in a traditional Castlevania title.

Super Metroid laid the groundwork, but I might argue that Symphony of the Night perfected it. Alucard is a more versatile character than Samus Aran, able to equip weapons and items in both hands, as well as armor, helmets, capes, and rings for defense. He can learn magic spells that are used with Street Fighter-like button combinations, and can gain experience points and level up like an RPG character. Alucard can learn to transform into various forms, summon familars to aid him in battle, and can learn new moves as the game progresses. Similar to past Castlevanias, he can pick up secondary weapons like throwing axes, holy water, and crucifixes, which are used with the hearts you pick up. As is the norm for the series, Alucard can only hold one of these secondary items at a time, but his main weapons and moves are so versatile, you probably won’t care.

The best part is, despite the sheer variety in gameplay, it all works so smoothly. Aside from the aforementioned combos used to cast spells, most of Alucard’s actions are mapped to specific buttons. Both of Alucard’s equipped weapons, his jumps, his transformations, almost everything is as simple as hitting a single button (though you must hold up and hit the attack button to use the secondary items, as is series tradition). Not only is it all easy and accessible, but Alucard is one of the best controlling characters in gaming. He lacks the stiffness that plagued the Belmonts of Castlevanias past, and his fluidity of control ranks alongside the likes of Super Mario at the very peak of gaming.

Like Super Metroid, Alucard’s progressively expanding array of abilities help him access new areas of the castle and discover its secrets. It is possible to beat the game without seeing everything, but Symphony of the Night is a game that begs to be explored, and the player is rewarded for uncovering as much of the castle as they can.

Uncovering the many layers of the castle and improving Alucard’s abilities give the game an insane amount of depth. As stated, Alucard controls so well that its a joy just to move around, and combat, though simple, is immensely fun, with a large rogues gallery of extravagant boss fights serving as a great exclamation point to the gameplay.

Visually speaking, Symphony of the Night still looks beautiful. The dark, gothic character designs and grim atmosphere give the game an appropriate tone, while the fluid animations for every character and enemy (specifically those of Alucard himself) are wonderfully detailed.

Then there’s the soundtrack, which is one of the finest of any video game. The majority of the soundtrack is performed with a full orchestra, and the game has an incredibly unique blend of classic, electronic, and metal themes. It’s a beautiful, creepy soundtrack that builds on the game’s dark atmosphere. There’s not a single forgettable track to be found.

Simply put, Castlevania: Symphony of the Night is one of those exceedingly rare games where all the pieces just come together to near perfection. The gameplay is terrific, the structure and design are genius, the visuals are beautiful, the soundtrack even more so, and it remains a deep experience even by today’s standards. But perhaps the greatest testament to Symphony’s brilliance is the way you can double the length of the adventure if you uncover the right secrets. The twist in which the game doubles its quest is still mind-blowing in execution, and has yet to be topped by any game.

It’s one of the greatest video games of all time, and that’s no miserable little pile of secrets.